Virtual reality is invigorating startup economies around the globe. Unity Technologies, the San Francisco-based maker of the Unity game engine, wants to fuel those VR startups by making its engine ideal for those games and apps. More than 2 million developers are using the Unity engine, and their games are being downloaded 1.2 billion times a month. That’s a huge amount of activity, and lately, much of it has been focused on VR, which is expected to become a $30 billion industry by 2020, according to tech advisor Digi-Capital.

Clive Downie, chief marketing officer at Unity Technologies, gets to see a ton of these demos. While places like Los Angeles and Silicon Valley are strong in VR, he says that virtual reality startups are sprouting in every corner of the globe.

I caught up with Downie at a Unity press event that showed off a number of VR game developers who are using the Unity engine to make Samsung Gear VR titles. Here’s an edited transcript of our conversation. 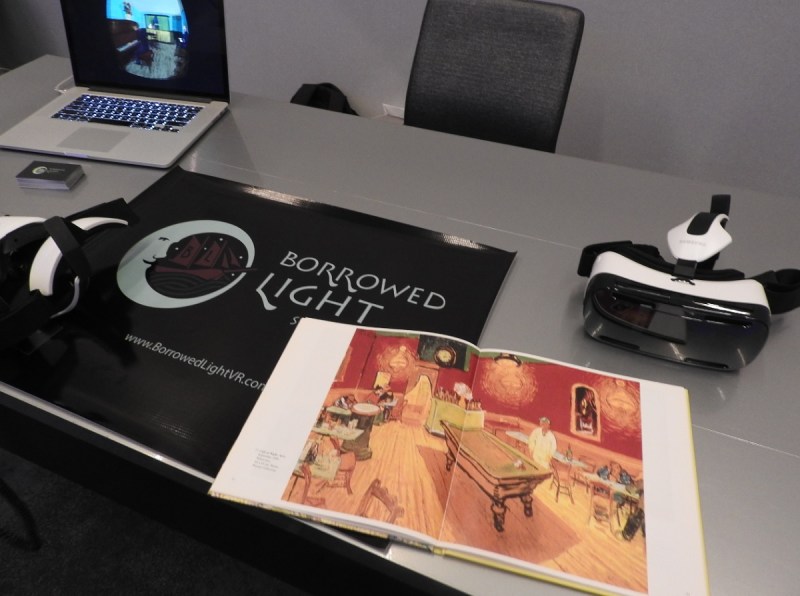 Above: The Night Cafe demo by Borrowed Light Studios lets you walk around a Van Gogh painting.

GamesBeat: How much have you invested in VR?

Clive Downie: We hope we’ve done a good job of investing in the tools that will empower people’s creativity as they start exploring this new platform. We’ve spent more than a year investing in this aspect of Unity. You can see here the power of creativity in the hands of a global set of developers.

We’re happy with where it’s going. We’re happy with the results on the Gear VR app store. Just after launch, 88 percent of the apps there were made with Unity. That, for us, is a great reflection of the investment we’re making in Unity and VR.

GamesBeat: Do you know how many VR games based in Unity are available now?

Downie: I don’t know that specifically. But of course in the background — because of the investment, we have people who are putting time into the Rift, PlayStation VR, HoloLens.

What Gear VR represents is the value proposition. You have people with what’s arguably the largest mobile phone format. There will only be greater accessibility for Android devices in the future. It provides them the opportunity to experience VR for $99. You’ve seen what makes successful platforms. It’s credible content and a credible value proposition.

This is the tip of the iceberg as far as credible content, which Unity is powering. The hardware represents a credible value proposition because of its price point and the experience it can power.

Downie: There’s always evolution. We’re excited about equipping the pioneers with the tools they need for their adventure. These are version 1.0s. Good on these developers for taking a stand and using Unity to get the 1.0 product out, because you know they’re going to continue to evaluate what went wrong and iterate on what went right. Two to three years down the line, on new versions of Gear VR and other VR headsets, these developers will have the head start.

I remember the head start we got at ngmoco in 2007, making mobile games. You look at the learning we had through subsequent versions of products. When other people were coming into the growing market, you could see them making the same mistakes we’d made two, three, four years before. It’s a credit to this room and their peers in the VR space who are going to wake up in about three years’ time and be grateful they got in on the ground floor. They’ll be the leaders in the space. They’ll have made the mistakes you need to make to get to excellence.

GamesBeat: What sort of variety of things are people picking Unity for? They wouldn’t necessarily use it for photos or music.

Downie: The majority of 360 video experiences use Unity. Many of the shops have Unity in their tech stack because the Unity player is so adept at importing the video files and outputting them in 360. We’re fortunate in that respect, that we’re applicable to video. We’re obviously applicable for creating 3D environments. We saw it and we’ve been investing in it.

GamesBeat: What changes did you have to make to your toolset? Would you consider it a big investment?

Downie: It’s a big investment and it’s ongoing. We have great partners in all the hardware companies helping us understand what they’re doing and how we need to react. That’s a benefit for Unity.

Our primary benefit, of course, is the size and reach of our developer ecosystem. When you think about launching new platforms, you want developers to create for those platforms. Unity provides that opportunity.

GamesBeat: Are there any games that are standing out as hits yet?

Downie: I think it’s too early. It’ll take a bigger installed base of hardware to do that, supply keeping up with demand. A few of the products here are doing well. Mr. Riccitiello’s been on that over there for at least 25 minutes. That’s not a bad sign. I’ve seen him play games for 30 seconds and walk away. 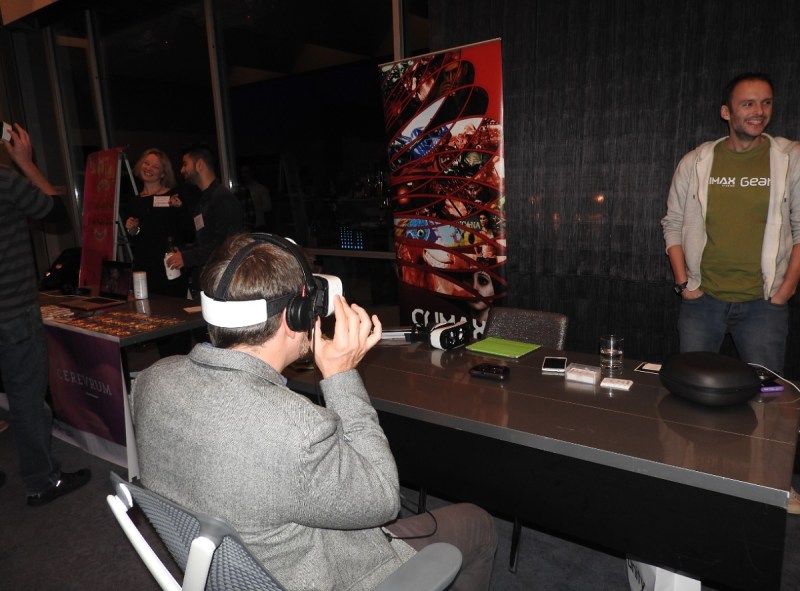 Above: Climax Games made Bandit Six Salvo in VR.

GamesBeat: I like this one, Climax Studios‘ Bandit Six Salvo game.

Downie: It’s a simple arcade shooter that’s done really well. It puts you in the space. The important thing to realize about Unity and about VR is about the applications that are non-game, though. We have Speech Center VR. It’s not necessarily a game, though it has gamification elements in it. Unity is also being used in training devices for a broad range of categories and markets.

GamesBeat: Do you know how much of the Unity developer base is moving over to VR?

Downie: I don’t have exact numbers, but in general we see great interest. You see the pioneers and you see people who may follow later. For this event, it was hard to go into the large number of games made with Unity and cut it down to 11. This event could have been a lot bigger. They could have numbered in the hundreds.

We’re hosting a vision conference in L.A. in early February. That’s where we’re bringing all the parties in VR and AR together in one place. It’s a summit for VR. We’ll talk about best practices, talk about where it’s going on a consumer level and a technology level and a crafting level. We’ve had close to 300 submissions, in the first week, for our awards at that event. That’s a good indication of the scale of projects that are available right now, at a quality level that people want to put up in competition. 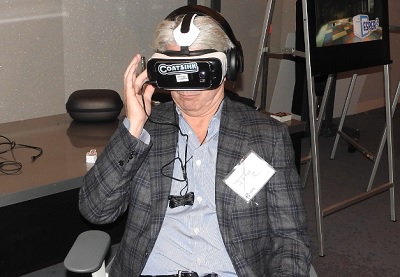 Above: John Riccitiello, CEO of Unity Technologies, gives Esper 2 a whirl with the Samsung Gear VR.

GamesBeat: The sense I get is that there are large communities in Seattle, the Bay Area, and Los Angeles. New York is pretty big too. Do you feel like all the major game development areas are getting into it?

GamesBeat: Is it almost a mirror of mobile game development?

Downie: It’s a slightly different as far as the form and function and complexity to it. It certainly doesn’t mirror the size of mobile. It could well in the future. Certainly Gear VR is a product that could get to that. But it’s early days.

GamesBeat: I’m always trying to figure out what’s the strongest region in games now, in terms of quality and revenue and jobs. Montreal has 10,000 jobs in games now. I interviewed a company that’s in Israel now, but the staff are all from Siberia. If Siberians can build a 100-person game company….

Downie: Did you see with Made With Unity videos we did? The guys who are making Vein, they’re six western developers working out of Tokyo. There are no borders now. That’s special. Something like Unity allows that to happen. When you have a uniform tool set, wherever you are in the world, that means you can move anywhere in the world and continue working, continue crafting. You don’t have to worry about dropping in at a new studio and learning new tools and new engine dynamics. We’re proud of this notion that Unity allows job creation.

GamesBeat: We wrote about a seed investment fund that’s focused entirely on VR, Presence Capital. A couple of others seem to be forming.

Downie: There’s one down the street, actually. They come in and see us. They’re looking, rightly, for our perspective on where the leading edges are for creativity, what we see people using our tools for. There’s a lot of investment going on.

GamesBeat: Did you guys start in L.A. for a reason with your VR series of events?

Downie: It’s a good intersection of all the forms of entertainment. It’s a creative center. It transcends games or movies or TV or other forms. You have creators like Alex McDowell, who was the design director on Minority Report and Fight Club. He runs a VR studio now using Unity. He’s based there, pioneering new 3D worlds. And you have game companies in and around the city as well.

GamesBeat: I saw that Ubisoft is jumping in with their first VR game. Do you feel like the big guys are in motion yet? I don’t know if they’d use Unity or use their own engines.

Downie: It varies. Unity is great for prototyping. We see it being used for prototypes at many big shops, as well as for mainline games. My sense is that most of the big companies are either prototyping or they’re in wait-and-see mode. I don’t think anyone is saying they’re not going to do it. It’s undeniably a version of future entertainment consumption. That’s a consensus.

GamesBeat: I know you guys see everything. Do you notice a continuing increase in the number of developers out there? Do you see any pull-back or consolidation among indies?

Downie: We see our monthly active users, developers using Unity, increase. We see the number of games launched per month increase. We see the number of downloads of games increase. We’re at 1.2 billion downloads a month for games powered by Unity. It’s not just focused on specific parts of the world, too. It’s a genuinely global base. We have strong growth in Russia and in China. The short answer is, yes, we see growth in developers. That’s in the made-with-Unity ecosystem.

The challenge to that is that discovery still sucks. We’re trying to do some things about that. It starts with increasing the discoverability of made-with-Unity products. The start of that is events like this. Another example is our website destination, which now has a very healthy six-figure MAU base and growing. 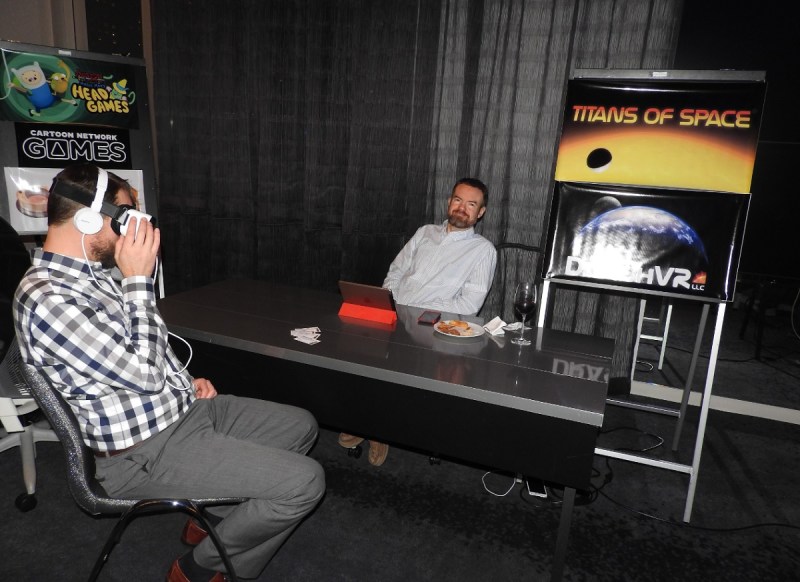 Above: Titans of Space VR game at Unity event.