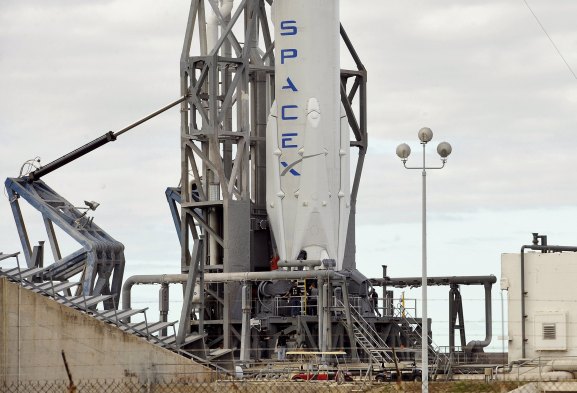 A remodeled version of the SpaceX Falcon 9 rocket rests on its pad as it is prepared for launch at the Cape Canaveral Air Force Station on the launcher's first mission since a June failure in Cape Canaveral, Florida December 20, 2015.

(By Irene Klotz, Reuters) – Elon Musk’s SpaceX on Sunday postponed launch of an upgraded Falcon 9 rocket and an attempt to land the booster at the launch site, saying the tricky touchdown would have a better chance of success if delayed for 24 hours.

A smooth landing would provide a big boost to Musk’s Space Exploration Technologies, or SpaceX, and its long-term ambition of refurbishing and reusing its rockets, an advance that could slash launch costs.

The mission, rescheduled for 8:33 p.m. ET on Monday, is the first for SpaceX since June 28, when the Falcon 9 failed during an attempt to deliver cargo to the International Space Station for NASA.

The revamped rocket will carry 11 small communications satellites for ORBCOMM Inc, which provides messaging services for retailers, shipping containers and others.

It is about 30 percent more powerful than previous SpaceX models and comes equipped with a more robust landing system.

The Falcon’s nine-engine main stage will attempt to touch down a few miles away from the launch site at a refurbished landing pad at Cape Canaveral Air Force Station in Florida.

Rival Blue Origin, a space startup founded by Amazon.com Chief Executive Jeff Bezos, nailed a similar landing test last month. Unlike SpaceX, which has a backlog of more than 60 launches, worth about $8 billion, Blue Origin is still conducting test flights.

SpaceX previously experimented landing its rockets on a platform in the ocean, so far unsuccessfully.

The Hawthorne, California, company was founded in 2002 by Musk, who also serves as chief executive of Tesla Motors Inc., the electric car maker.