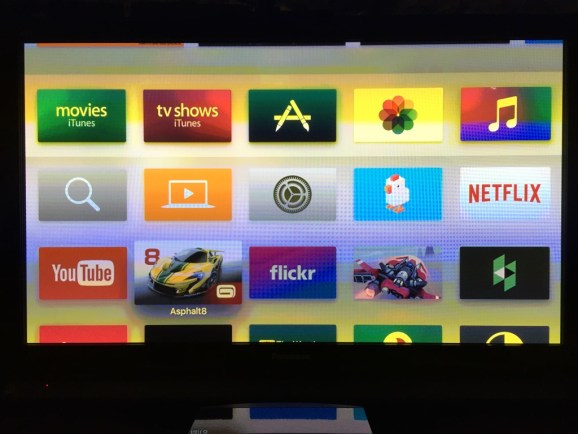 The new Apple TV homescreen will be kind of empty until you populate it from the App Store. Photo by Simon Cohen

Looking back on the ‘Year In Apple For 2015,’ there are two big themes.

First, by the numbers, the company kicked ass, thanks to the iPhone. And second, it was an unusually busy year in terms of major product launches.

Let’s start with the numbers.

Revenues grew more in the fiscal year ending Sept. 30 than they did the year before, thanks in large part to the iPhone. Apple sold more than 50 percent more iPhones in FY 2015 than it did just two years ago. The iPhone, after several years of hand-to-hand combat with Samsung’s Galaxy, resumed its seemingly unstoppable, meteoric growth driven by the bigger iPhone 6 and 6s Plus.

Still, you can bet that just about any tech company on the planet would sell their first-born for Apple’s overall numbers.

But what made this year particularly interesting was Apple’s busy calendar for major product launches.

Granted, how one defines ‘major’ is inherently subjective. There was nothing this year quite on the scale of the first iPhone or iPad. Yet many Apple fans get worked up about new versions of iOS or Mac OS X, or tweaks to iPads. But for me, these are interesting, if mostly pedestrian improvements that Apple likes to present as game-changing innovations at its Worldwide Developers Conference.

When I think about Apple’s major moves, there were four important releases that stood out and that could have a big impact on the company:

Apple Watch: Yes, this was announced in 2014. But sales started in the spring of this year. And several months later, there remains a robust debate about whether the watch can be declared a success or not. Apple makes it hard to know because it buries the sales number within a broader product category.

Still, it appears the company sold about $1.7 billion worth of watches in less than half a year. And there are various reports that seem to indicate that the Watch is selling well this holiday season. But there is still some grousing that the selection of apps and the Watch’s overall utility are not living up to expectations.

And thus, speculation has started about whether there will be an Apple Watch 2 announced in the spring that would include more of the health features that were rumored to be in first version but ultimately left out.

Of course, we’ll likely get more color on the Watch’s performance when Apple reports its first quarter earnings in late January or early February.

But I stand by my initial thought when the Apple Watch was first unveiled: Its success will be a slow crescendo, as app developers need time to understand its use cases. And things that will make it more useful, like the rollout of Apple Pay, will give it a boost over time. By the end of 2016, we should have a better idea of whether the developer community is still willing to invest a lot of time and resources into making the Apple Watch a hit.

Apple Music: Although Apple was once the pioneer of digital music, the belated launch of its own streaming-music service certainly qualifies as a new product.

As digital downloads from the iTunes store declined, Apple finally gave in to the inevitable and launched a streaming service on the back of the Beats Music service it acquired two years ago.

So far, Apple Music seems like it’s off to a decent start. In October, Apple CEO Tim Cook said the service had 15 million users. That number included 6.5 million people paying $9.99 a month and 8.5 million on a three-month free trial. That compares to the 20 million paid users for Spotify, which also has more than 75 million active users, including those who use its free service.

Reviews of Apple Music have been decent, but mixed. While the curated playlists are strong, there’s not much here that’s revolutionary or all that different from rival services. I wondered before its launch why Apple was even bothering, given that music sales were at best $10 billion of its $233.7 billion in overall sales last year.

The upside is limited. But with Apple Music the default service installed on the iPhone, it’s going to continue to grow in 2016 as long as Apple stays the course, and new customers discover the benefits of music streaming.

Over time, Apple’s big advantage will be that it faces no pressure to make its music service a profit center. It can afford to take the long view while making tweaks and improvements along the way.

Apple TV: For my money, this announcement was potentially way more exciting than any of the others. I’m not a candidate to buy a smartwatch, and I’m sticking with Spotify over Apple Music for now. But I was quite excited at the prospect of a long overdue revamp to Apple TV that finally let developers write for the platform.

This is the product that I think has the most potential. I haven’t bought mine yet because initial reviews have been unfortunately mixed. The requirement to use the new Apple controller for games seems odd. And developers are clearly still trying to figure out what to do with the new Apple TV.

So I decided to wait a few more months. I’m not all that worried about whether Apple eventually launches its own TV streaming service. But I’m convinced that eventually the new Apple TV will be big, at the very least for games.

iPad Pro: With iPad sales tumbling, this category is a good example of how Apple listens to its customers. What the company no doubt heard is that for many businesses and schools, the iPad without a keyboard or some other input device was of limited use.

So along with making a big, honking iPad, Apple made a stylus (Apple Pencil) and a keyboard (Smart Keyboard). They are not the first such products, but in true Apple style, they somehow seem new enough.

Given that these products are aimed at professionals and educators, it’s going to take a long time before we know whether they’ll succeed in pushing Apple deeper into the enterprise and education markets. Still, the pace of app development is usually a good clue: If we see a lot of apps being developed for use with the Pencil, we should have a good indication in 2016 whether the iPad Pro can turn the tide of iPad sales.

Looking ahead to 2016, there is not at the moment the same anticipation of big, new product announcement. And that’s just fine. Apple has plenty of things it can be doing to improve on its expanded ecosystem of gadgets and services.

No doubt, Apple will come up with some clever way to make 2016 sound like it’s more than just “The Year Of Tweaks.” But there’s nothing wrong with focusing on improvements.

After a whirlwind 2015, Apple should have a grace period of at least six months before everyone starts complaining about how long it’s been since the company released a new product and penning think pieces about whether it can still innovate.