If you’re like me, you’re probably a little tired of the match-3 game. But Magic: The Gathering can make anything better — including these gem-matching puzzlers.

The popular card game now has its own puzzler with Magic: The Gathering — Puzzle Quest, a free-to-play app out now for iOS and Android (I played it on my iPhone 6). While its lack of a story might upset fans, the addition of mechanics from Magic: The Gathering make this one of the more complex and distinct puzzle experiences on mobile. 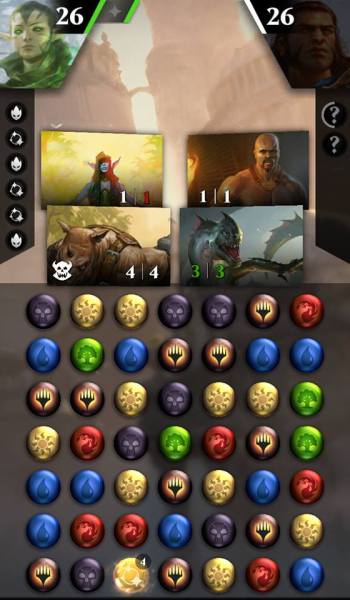 Above: Magic: the Gathering – Puzzle Quest.

At this point, the match-3 puzzle game has practically become a punchline in the mobile space. It seems like the easiest, laziest option for developers looking to make an easy hit, especially after the crazy success of King’s Candy Crush Saga.

However, Puzzle Quest improves on the formula by making the actual game about more than just matching gems. Making matches earns energy, which you can use to play cards that will help you beat your opponent. Of course, earning a lot of energy helps you win, but a lot of the complexity comes from making decks, playing the right cards, and targeting specific energy types for your matches (your character will earn more energy from specific elements.)

When I first heard about this crossover, I worried that it would just be a Puzzle Quest game with some Magic: The Gathering art. Thankfully, it takes a lot more inspiration from the card game than that. Just like in the real thing, you play monsters that attack the enemy and protect you. You’re just summoning them with energy earned from matches on the puzzle board instead of by tapping cards.

And, just like regular Magic, you can build a deck. This means you can customize which creatures, spells, and enhancements you can bring with you into battle. It also gives you extra incentive to play, since you can use an in-game currency to buy packs of more cards. Of course, this is also how Magic: The Gathering — Puzzle Quest can become expensive, since you can use real money to purchase cards. You can buy some with the in-game currency you earn, but you’ll definitely have an easier time if you spend some money.

While you mostly use creatures and spells to attack your enemy, your hero character, the Planeswalker, has their own abilities. While most tiles on the puzzle board give you energy, some give you mana which let you use special skills unique to each Planeswalker. These range from letting you draw an extra card to giving all of your creatures an attack boost. Each Planeswalker also favors certain elemental types over others, so it impacts which energy you’ll focus on matching.

You can also level up your Planeswalker with an in-game currency (separate from the one used to buy card packs) that you earn from playing matches. This can unlock more skills, so it gives you plenty of incentive to keep playing. 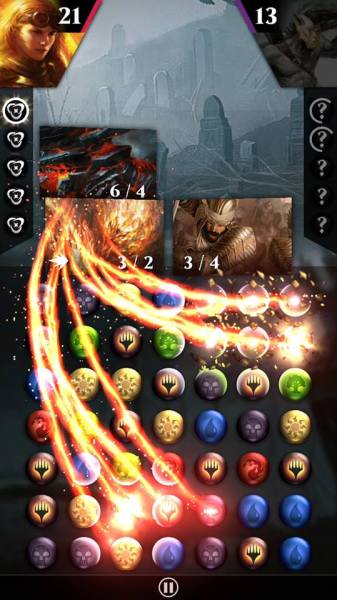 Story mode in name only

Magic: The Gathering — Puzzle Quest boasts a story mode, but it’s really nothing more than a series of fights against computer opponents. That’s fine, since it gives you plenty of unique battles and chances to earn currency, but it feels a bit disingenuous to call it a story mode. The original Puzzle Quests had the scope of role-playing games. The lack of a real story makes this feel a bit smaller.

Playing through the story mode is usually fun, but you’ll occasionally meet an opponent that seems to overwhelm you, even when the previous fight felt like a breeze. You can try to just keep fighting them until you get lucky, but it feels like the game is pressuring you to drop some money on new cards.

You also can can only revive your character so many times before having to wait for a cooldown (or spend money to replenish health). However, the timer was pretty generous, and I never had to spend any real money to heal my Planeswalker.

Magic: The Gathering fans will be surprised to see how much of that card game’s mechanics remain intact in this match-3 version, and even casual mobile fans who have never played the original can appreciate Puzzle Quest’s added depth to the formula. You’ll even get a lot out of it without spending any real money, although the thirst for more cards will definitely tempt you.

Magic: The Gathering — Puzzle Quest is out now for iOS and Android devices. GamesBeat downloaded it once it was live for the purposes of this review.