Everybody makes mistakes and exercises poor judgement. It’s just a fact of life. We take our lumps, we lick our wounds, and we move on. Yet every year, we see entities in the game industry making the exact same mistakes: cultivating a bad public image, shipping unfinished and buggy products, and generally just hurting themselves with badly conceived ideas.

As 2015 draws to a close, let’s look at some of the biggest “how did they let this happen?” moments of the year.

Testing games for PC is hard. People run so many different system configurations that it’s impossible to account for every possible scenario. You can try your best, but there’s always going to be somebody out there who has problems you don’t expect.

Still, this didn’t excuse how badly Batman: Arkham Knight ran when it was launched on PC earlier this year. Systems that were leagues above the recommended spec still experienced inexplicable bugs, framerate issues, crashes, and resolution problems. People claiming to be testers for the game claimed that Warner Bros Interactive knew about these problems but still pushed the PC version out for release anyway.

With all the bad press surrounding the PC version’s problems, Warner Bros. Interactive chose to remove the digital version of the game from Steam and other digital download services. While the game has since been offered for sale again, problems continue to persist to such a degree that WB is now offering unconditional refunds on the PC version of Arkham Knight through the end of the year.

Fledgling indie-focused publisher Versus Evil has put out some solid releases like The Banner Saga and Guild of Dungeoneering, but this ill-fated sequel to the tepidly reviewed PS3 and 360 game Afro Samurai was a colossal mess. Based on the media franchise of the same name, Afro Samurai 2 promised bloody action, a great story by the co-writer of American Sniper, and a killer soundtrack with the involvement of hip-hop artist RZA. Versus Evil put a lot of effort into promoting it, showcasing Afro Samurai 2 prominently at media events and trade shows like E3. The game was planned for an episodic release, with further installments trickling out through 2016 – and, of course, you could pre-buy a bundle of all three games

So what happened? Well, reviews came out, and they were savage, featuring such comments as “quite frankly terrible,” “literally painful,” and “fuck this game.” Consumers weren’t pleased, either, with Steam and Metacritic playing host to numerous vicious reviews. It didn’t take long before Versus Evil pulled the game from PC and console digital storefronts, offering a full refund to anyone who’d purchased it. The planned followup episodes were also canned.

Perhaps the offering of refunds is a sign of goodwill towards players, but the question remains — why did they release a game that clearly wasn’t that good to begin with, rather than delaying it to fix it? Afro Samurai isn’t the type of IP that would lose sales and goodwill from a delay. We’ll never know if the followup episodes could have improved on things, either. It looked like Versus Evil just wanted to forget the whole thing ever happened.

Tony Hawk is one of the most fondly remembered game franchises of the late ’90s and early ’00s, so when Activision announced Tony Hawk 5 — along with promises to eschew open-world elements in favor of returning to the core gameplay — longtime players were understandably excited. But the publisher’s reluctance to widely promote the game, however, was worrying, as was the release date — scheduled at the end of 2015, right when Activision’s contract with Tony Hawk was set to expire.

The end result was dire. The packaged product sent to retail had all the earmarks of a rushed game: crashes upon crashes (some when simply booting up the game), bizarre bugs, weird freezes and load times, poor online features, and puzzling gameplay decisions (mapping the stomp and the grind to the same button? What?). The worst part? The disc only contained the barest elements of a game — in order to access the vast majority of it, you had to go online and download a day-one patch that weighed in at over 7GBs. Admittedly, the bugs are pretty funny to watch — though far less amusing if you’re one of the poor souls who spent $60 on this.

When you’re a peripheral company sponsoring big-name players and getting your name out at esports events, it’s important that your products look good when the competition gets heated. So when top Ultra Street Fighter IV player Momochi’s Razer stick malfunctioned during the Grand Finals of EVO — the biggest fighting game tournament in the world — it was an incredibly bad look for the company.

One high-profile failure like this is damaging enough to your company’s reputation, but to add further embarrassment, Razer’s fightsticks failed at a second major Street Fighter tournament, Capcom Cup, crippling competitor Humanbomb.

While Razer sponsors several well-known Street Fighter players like Fuudo and Xian, it’ll be a long time before their name evokes anything but snickers in the fighting game community. If you’re going to make gear for competition and promote it heavily, you’d better be damn sure it holds up under pressure.

High-profile Kickstarter flops show the bleaker side of crowdfunding

Big games like Bloodstained and Shenmue III made waves on Kickstarter, but crowdfunding has also had its fair share of high-profile flops. After the success of Mighty No. 9, creator Keiji Inafune’s company Comcept returned to Kickstarter with a pitch for Red Ash, an action-adventure game whose inspiration came from the Mega Man Legends series.

It seemed like a sure thing — to the creators, at least. But consumers were still waiting for the release of Mighty No. 9, a game that looks different in its current state from the original concept images. Unhappy with the direction and delays MN9 had been subjected to, the people who eagerly gave cash to the last Kickstarter kept their wallets shut. As it became clear Red Ash wasn’t meeting expectations, the campaign began taking measures that looked increasingly desperate, including releasing an extremely early beta. Eventually, Comcept announced that they had secured funding for the game from outside publisher Fuse, and that the Kickstarter would be used for “stretch goals” — which actually made the Kickstarter lose money. It didn’t succeed, as you might have guessed.

(Mighty No. 9 was also delayed into 2016 mere days after the Red Ash Kickstarter flopped, giving fans all the more reason to be angry.)

2015 was also a reminder that even a fully funded Kickstarter with big names behind it can turn into a mess. Unsung Story, a strategy/RPG Kickstarter by Playdek that promoted the involvement of Tactics Ogre and Final Fantasy Tactics mastermind Yasumi Matsuno, enraged backers with its sudden decision to shift focus to delivering a PvP strategy game mode before giving backers the single-player, story-driven adventure that they wanted. One look at the comments on the project’s Kickstarter page shows how badly goodwill has deteriorated, with numerous backers angrily demanding refunds.

It’s not easy to completely torpedo 30 years of accumulated goodwill within the span of twelve months, but Konami’s accomplished this most dubious of self-sabotaging feats. It started with the cancellation of Silent Hills, an eagerly anticipated reimagining of the classic horror franchise. The game, which was being worked on by acclaimed creators Hideo Kojima and Guillermo Del Toro, had earned a great deal of hype thanks to the 2014 release of “P.T.,” a “Playable Teaser” that showcased some of the concepts the team was going for with the game. Not long after the cancellation announcement, P.T. was effectively nuked from the console storefronts — you can’t even redownload it if you already acquired it.

Not long afterward, Konami announced that they were moving away from triple-A and mid-range console and PC development, choosing instead to focus on mobile. At the same time, former Konami creator Koji Igarashi took his Castlevania-inspired project, Bloodstained, to Kickstarter, raising over $5 million from eager fans and standing in stark contrast to Konami’s business decision.

Rumors about Hideo Kojima had also begun to swirl around this time. Konami had taken the stealthy move of removing Kojima’s name and the name of Kojima Productions from the marketing materials packaging of Metal Gear — something fans quickly noticed and then raged about. Reports began to arise about poor working conditions at Kojima Productions, with Kojima himself rumored as being forced out of Konami once work on Metal Gear Solid V: The Phantom Pain was finished. Months later, another report from the Japanese Nikkei newspaper painted a bleak picture of the working conditions at Konami as a whole.

After The Phantom Pain released to wide acclaim and great sales, many of the rumors came to fruition: Konami disbanded Kojima productions, killed off its expensive FOX engine, and Kojima left the company (complete with a going away party). While Konami claims that Kojima is simply “on vacation” until the end of the year, nobody’s really buying it.

To top it all off, Konami’s legal team has been hard at work apparently preventing Kojima from accepting awards or attending ceremonies related to his creation. At this year’s Game Awards, Geoff Keighley addressed this publicly, harshly chiding Konami for preventing Kojima from enjoying the rewards of his hard work as the audience booed.

Kojima has since announced the formation of a new studio – a remade Kojima Productions, independent of Konami – and is working with Sony on an as-of-yet unannounced title. Fans reacted to the news with an immense outpouring of love and excitement, with “Kojima” being a trending topic on Twitter within minutes of the announcement..

While Konami assures us that Metal Gear will continue without Kojima at the helm, the sheer animosity it’s accumulated makes it unlikely that the next installments in the series will be received anywhere near as well as the previous games. This viral image, made by Twitter user @tortoiseontour and shared thousands of times, sums up the general feeling players have towards the company: 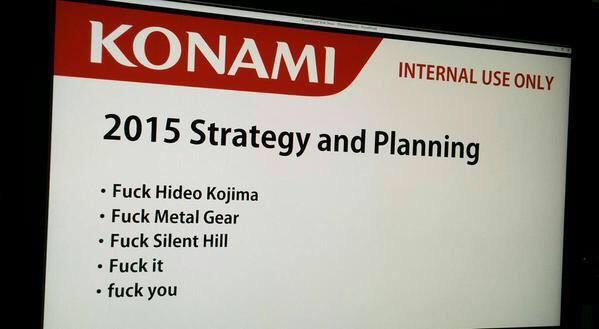 Above: It’s not real, but to many consumers, it might as well be.