A new player enters the game

On November 14, Holt-Kentwell announced the founding of his new company, Catalyst eSports Solutions. As a long-time fan of Holt-Kentwell’s great work at Razer, I reached out immediately to schedule this interview and learn more about the new project. When I asked him what his goal as with Catalyst, he said, “… to enable brands and teams to maximize their value from esports.” Instantly, I was intrigued.

“I can act as kind-of a third party on the periphery for brands who can’t hire an actual esports employee,” Holt-Kentwell qualified. “No one knows how to set goals or measure success for that person — this gives brands a consultant specifically to help build messaging.” He’s got a great vision, and he describes helping teams build the infrastructure to find better sponsors, improve their reach, and allow their brand partners to extract better value from their sponsorship. On the corporate side, he sees ways to help brands already investing in esports maximize their return on investment, while helping new entrants to the scene build their presence more effectively.

Everything I’m hearing speaks to me as someone as invested in the scene as Holt-Kentwell is. “When I created Catalyst,” he said, “I realized there were companies who would benefit from this kind of knowledge. ‘We need someone to navigate all these games, but we can’t find anyone like that — is there an agency that can do that?’ That’s basically what I’m starting.” He sees an industry growing faster than a lot of third parties can keep up with. “Ultimately, this is driven by a lack of infrastructure in esports – a lot of teams have massive audiences and great numbers, but misunderstand what it means to engage an audience.”

Asking him why he thinks that is, he hits a note many industry veterans are all-too familiar with. “Teams aren’t run by marketers or advertisers – they’re gamers, or straight out of university.” Holt-Kentwell’s not being condescending – he simply recognizes the mismatch between the goals gaming teams and sponsors have. He wants to professionalize teams by helping them develop key marketing assets, so they can take meaningful sponsorship decks to potential partners.

“I guarantee that 80 percent of teams in esports today don’t have a basic set of goals that explain where they want to be in a year, what their company philosophy or brand messaging is, who their audience is — these are all the kinds of elements that are important to a brand.” For an ancient history major with no business background outside of esports, Holt-Kentwell has narrowed in on and refined the needs that teams and brands within the industry have in an astonishing fashion.

Given that he was leaving Razer — who had stationed him in Singapore for strategic reasons — I wondered if Holt-Kentwell might take his new venture back to the U.K. or elsewhere. He told me he was tempted to go back to England, but that the opportunities in Singapore (one of the most business-friendly places in the world, he tells me) made it a good fit. He’s also leaning on lessons learned at Razer, who saw the Asia-Pacific region as a major growth market.

“For me, one of the big reasons that I did stay was that I wanted to act as a bridge to Asia for the West and vice-versa as well.” He sees an international gaming scene, one that transcends language or borders. “A lot of people don’t know why Asia should be interesting. It’s this kind of mystery land that people don’t really think about.” He sees a ton of growth there, as well as other emerging markets like Brazil. “My goal here is to try and develop and build brands the same way I would in the West.”

He describes a great example of the crossover he is imagining in one of his earliest confirmed clients, MRJ — an esports brand launched by famous Taiwanese musician Jay Chou. “They’ve brought me on as their exclusive agent to acquire sponsors for them from the west.” As more and more major players look to invest in esports, I imagine this is a strategy that will continue to pay off for Holt-Kentwell.

He’s also thinking a lot about how to help the whole industry flourish in a way that will allow businesses like his to be sustained. “One of the things I’ve been working on for smaller and developing teams is an esports management guide. It’s about 15,000 words of raw information. That’s something that we’re going to release as free material to developing teams.” He goes on to say that if he sees potential in such a team, he’ll help them find sponsors. “I’ve seen so many teams that hit a hurdle because they don’t have sponsors, contacts, or don’t know how to close a deal or talk to a sponsor – helping teams overcome that is going to be a big thing.” He knows it’s not necessarily a good business proposition to be offering those kinds of services at little to no cost, but he genuinely seems to want esports to grow, even if that means less personal gain for himself.

We talked for hours about the future of the industry. I wanted his take on where things might be headed, and how much of a risk he felt he was taking moving away from the well-established Razer to found his own startup. He talked a fair bit about the prices that the sale of esports teams have commanded, and generally concluded that “the industry is going to be in a very sharp period of growth.” 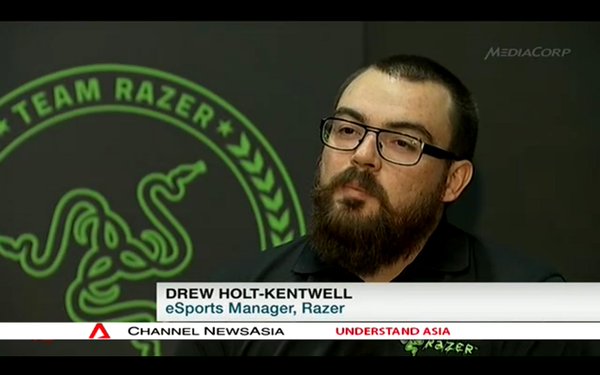 Insofar as Razer is concerned, he seems to feel good about his decision, but acknowledges the risk: “Generally speaking moving from Razer is a calculated risk – I’ve seen this wave happen over the last couple of years. Teams will always be centric to what esports is. They’re the secret ingredient to the spectacles and the entertainment. Tournaments are popular, but without the big teams/clubs, those events/organizations aren’t popular or watched.”

Holt-Kentwell’s feelings seem to mirror what I’m hearing elsewhere. He believes that the team scene will professionalize and become more stable. He draws the analogy to the music industry, saying, “You’ll get a breakthrough artist who can pioneer a genre, and for the next five-to-10 years, you’ll find people inspired by that, and get copycats. The same might be true for esports.”

Our conversation turns to areas of growth. He talks about seeing major events in Asia, and how that will help to establish local internet infrastructure (nothing akin to how South Korea bounced back from the Asian financial crisis of the late 1990s, but something). Talk of mobile and how that will continue to expand also filtered in, and I could tell Holt-Kentwell was intrigued by its future potential.

Who could do such a thing

He does have concerns, though. Part of his vision is to make sure that esports continues on the incredible path it appears to be on. “I’m doing this because I love it,” he says. “Being a product of the industry myself — every day, when I spoke with my friends, we wanted to see this become massive. Having that sense of excitement is something we’ve worked so hard for. Now that we’re here, I don’t want any of that to crumble away. My dream is to do my part to see it smoothly into the next stages.”

As I listen to Holt-Kentwell describe his aspirations and his appetite for risk, I begin to understand what he is about to tell me — you can’t push the boundaries the way he wants to within the confines of an established organization with bottom line concerns. “You can’t do this working for a company like Razer,” he says, “because there’s too much conflict of interest, and too many restrictive goals.” He foresees himself hiring more people, and trying to “nurture and train them, like I was at Razer.”

His description of the job has me questioning whether it’s time to reconsider my path as a writer, because this sounds incredible: “You’re going to come in and chat about Dota vs. CS:GO, what happened on Reddit, etc. — a group of people that are aware of this ever-growing ecosystem.” Sounds like my typical day. I’m sure I’m not the only one.

Holt-Kentwell also recognizes that it’s not a one-person job that he’s occasionally in over his head. In speaking with potential clients who wanted to hire esports managers, he couldn’t guide them to anyone. “It’s a very specific role to work for a brand in esports and to find them value from the industry. It has to be multi-talented, flexible, multitask consistently — and as esports grows, it will become much harder. Even for me, I was constantly amazed — I actually have no idea what’s happening in Hearthstone.”

As a cohost of a Hearthstone-focused podcast, I offer to catch him up another time.