That feeling of repetition to the point of words losing meaning? It’s called semantic satiation, and I feel it digging in as we keep referring to infrastructure. After everything, I ask Holt-Kentwell what infrastructure he thinks esports needs not just to survive but to thrive.

He gives me a list of things teams need — staff, goals, strategies, marketing plans, and ways to monitor your metrics. Specific things, like branding around corporate design, business relationships, etc., he has stronger feelings on, but I also get the sense he’s holding back just a touch — after all, I’m not a team manager, and I certainly didn’t pay for all of this great info. 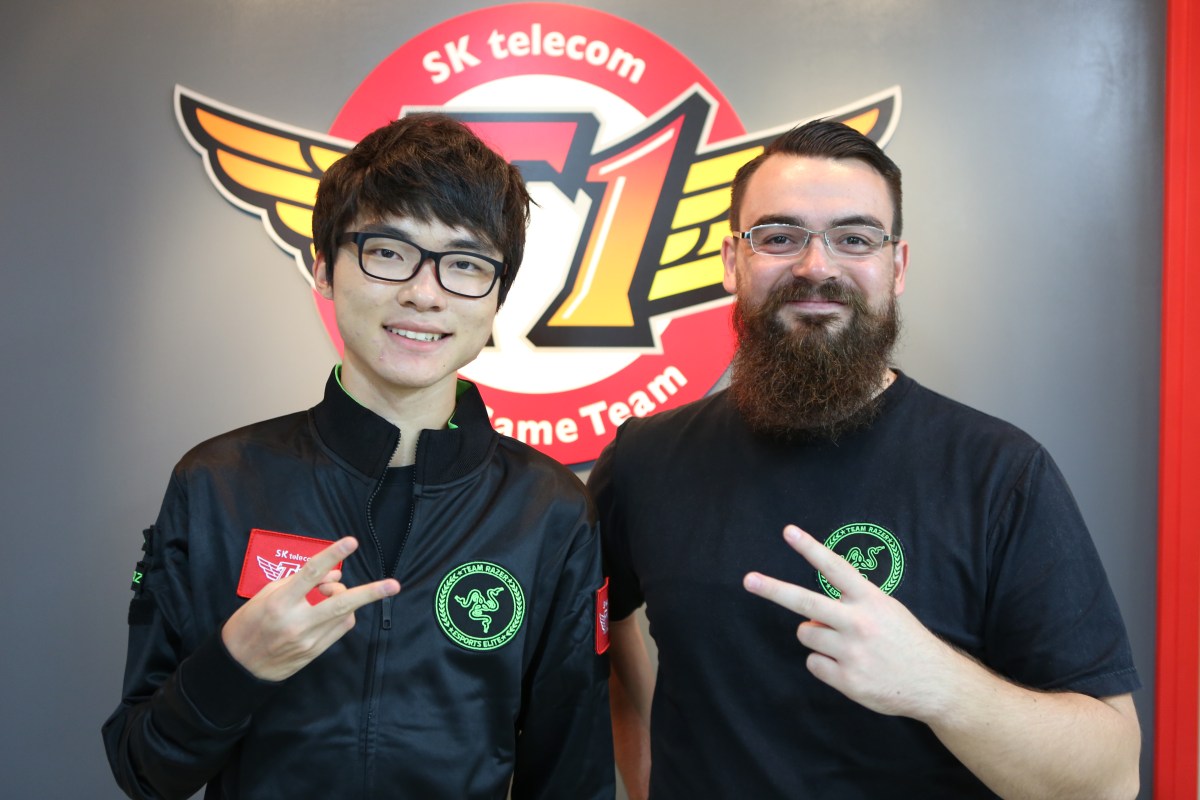 Above: Lee “Faker” Sang-hyeok (left) is one of the best players under Razer’s banner.

We flip over to discussing events, where he sees a lot of the same concerns. “Events are ultimately driven by sponsors,” he tells me, and explains that reporting, statistics, production, etc., need to be carefully planned, and that there are a lot of brands that need help in determining the correct processes to get involved and get value on their return.

His biggest challenge? Having teams recognize that they need this kind of help. “I’ll go to a team and have a conversation — the way you discuss it has to be not critical, but suggestive of ways you can help them develop,” Holt-Kentwell explains. “Many people have a very narrow sense of what they’re achieving. The balance between what a team expects and what a sponsor expects, and trying to level out that value — it’s really a price, at the end of the day, that people are trying to negotiate on.”

Whose bill is it anyway

I’ve been critical in the past of how dependent esports can be on sponsorships, so I ask him if he sees a future where the relationship between esports and sponsorship changes at all. He doesn’t think so.

“Sponsorship has built the industry. By the nature of my work, I see so many brands that want to — and can — invest in esports, and it’s affordable to do so.” The differences he describes in what it costs to sponsor an F1 or NFL team as compared to an esports organization are staggering. Of course, that’s not his only rationale: “The reason why esports is so brand-driven right now is because of the proximity of brand and customer.” I speak pretty good business jargon, but I ask Holt-Kentwell to elaborate.

“In mainstream sports, you are separated by a television screen, but in competitive gaming, your customer is literally a click away from your brand, and two clicks away from a spend on your product. For as long as it’s affordable and as long as brands can quickly and easily reach an audience of this nature — this size, this demographic – I don’t see it changing drastically.”

My previous reticence to see the whole esports scene live or die by the sword of sponsorship is actually calmed a little by Holt-Kentwell’s perspective. He’s honest, but hopeful — telling me that he thinks there will be lots of growth, and that nonsponsorship revenue streams like ticket sales, merchandise, etc., will also continue to have an impact. I’m cautiously optimistic, given his enthusiasm, that maybe we’ll see big, positive outcomes when the dust does settle in the coming years.

Asked for his last thoughts on what he would communicate to anyone who wants to help the industry grow, insider or fan alike, Holt-Kentwell offered me this:

“Inspire esports. Inspire esports, to me, is a philosophy — a way of esports life. From as small as basically going out and telling someone what esports is and what it is you do, and not being embarrassed about playing games competitively or professionally — to go out and be proud of the fact that we’re living in one of this generation’s greatest digital revolutions. Be proactive in trying to grow that industry.”

Everything he says is so sincere. This is a man who has built his entire professional career around people playing video games at the highest levels of competition for a living, and the urgency with which he conveys his suggestions hints at a love of games and esports that transcends simply doing business in a burgeoning industry.

“Go work for a team, go volunteer for social media, go and research how to engage fans. Learn about marketing, sponsorships, the value chain in esports. Learn what people want — you have to find out what people want! Ultimately, there’s no easy way into working in esports — you have to grind. You have to work as a volunteer, and at some point – as with any new venture — there has to be a certain amount of risk.”

If the man responsible for pushing Team Razer to become one of the most successful esports organizations of all time is willing to bank it all on that kind of risk, something must be there. If you need me, I’ll be polishing my resume to see if Holt-Kentwell will have me as his new marketing specialist.