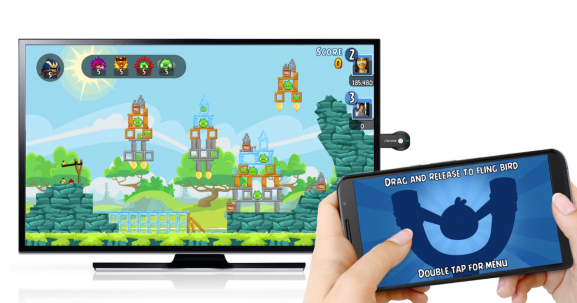 In case you didn’t know, Google’s Chromecast is capable of playing games.

Oh, you knew that already? Well, did you know Angry Birds Friends is officially going to be available for the Chromecast next week? Oh. You could tell from reading the title of this article and the picture I used. But what if I told you it wasn’t just Angry Birds Friends but also Monopoly Here & Now, Yahtzee Blitz, The Game of Life, and Scrabble Blitz 2.0?

Look, when the Chromecast pairs up with my Android phone, I can control these games on my television set using the phone. For something like Angry Birds Friends, it’s pretty obvious how this works. But for something like Monopoly Here & Now, it’s a bit more interesting. Each player uses their phone to manage their cards, money, and property — while a large shot of the game board is on the television screen.

If you’re not convinced and rolling your eyes at me, look at it this way. This sort of control scheme actually solves a huge problem with board and card games being played on the living room TV platform. Most games that require me hiding cards or information from other players are crippled by the fact that everyone shares one large screen. Now, with the TV functioning as the main board, and all players using their smart phone as their digital hand, maybe we can see more exciting games get ported over? Like, I don’t know, Settlers of Catan or Ticket to Ride?

In either case, Angry Birds Friends, Monopoly Here & Now, Yahtzee Blitz, The Game of Life, and Scrabble Blitz 2.0 are looking to launch on the Chromecast’s game section later this week.