One of the most popular holiday gifts are mobile devices. This means consumers across the globe will be spending a great amount of time diving into app stores to load their devices with games and apps. Awareness, high chart position, and search visibility is key to getting your app in front of this engaged audience.

But in order to take advantage of this opportunity you must carefully develop your listing and media plan. Why?  As you buy clicks to land on your app store page, (known as burst campaigns,) you want to maximize how many clicks convert to installs as well as how many users take notice and click-through to your app store listing!  This decreases your overall cost per user, netting you a higher profit margin.

These following five tips should be added to your playbook as they have proven actual effect on your ranking, click-through rates, and success in the app stores.

1. If you have a regional release for Google Play, don’t go for global press!

This is a giant misstep many developers make. They are targeting a regional release, but they go after the large global blogs and review sites. The Google Play algorithm geo-fences social media mentions of your app. When users search the app store within the geo-targeted area that your app is mentioned, your app will appear higher in the ranking algorithm. If you’ve wasted energy going after bloggers with a  global reach, you’ll have some impact, albeit minor, but not near the impact if you had targeted regionally specific bloggers and social media users!

Realtors know that in order to psychologically get prospective clients to see themselves in a house for sale, they must remove the “personal” belongings of the current tenant. This means no family photos, dog bowls with names on them, etc. This way a prospective buyer can picture themselves inside the home, occupying the space with their own mental images of their personal belongings.

The same principle holds true with the app store screenshot listings. When a user sees a hand holding a device in a screenshot, it breaks the psychological tie of the possible buyer (installer) to the use of the app. Through optimization testing, we have seen incredible click-through rate increases when removing the hand from the screenshot and framing just the device.

3. Know the algorithms: use and abuse that knowledge in your bursts!

This tip is more tricky than others as you must consider both how the app stores behave as well as the most effective tool to improve your ranking. The overwhelming factor impacting your ranking on iOS is the recent volume of installs of your app. Recent installs also impacts your ranking on Google Play but to a lesser extent. iOS calculates app installs and weights them in importance, giving the heaviest weighting to the most recent downloads. iOS looks at the past four hours and the past four days with diminishing weight given day over day and hour over hour. For example, iOS gives this specific weighting system to your installs when calculating ranking: eight times today’s installs, five times yesterday’s, five times the installs from three days ago, and two times the installs from four days ago.

Now, you should carefully develop a marketing plan that takes into consideration your costs (time/effort and advertising spend) along with the consumer download activity occurring from the store during the time you achieve desired ranking given the day of the week or season.

A leading distributor of mobile apps, NativeX, shared the following information about planning a burst campaign for your app during Christmas. Last year, iOS burst campaigns leading up to Christmas were priced at only 14 percent higher CPI rates than the trailing three weekends, even though downloads ended up being 150 percent higher on Christmas Day compared to 20 percent higher on weekends. Heading into this December, CPI rates are down 18 percent compared to last year for November so it’s shaping up to be a great time to run a campaign. 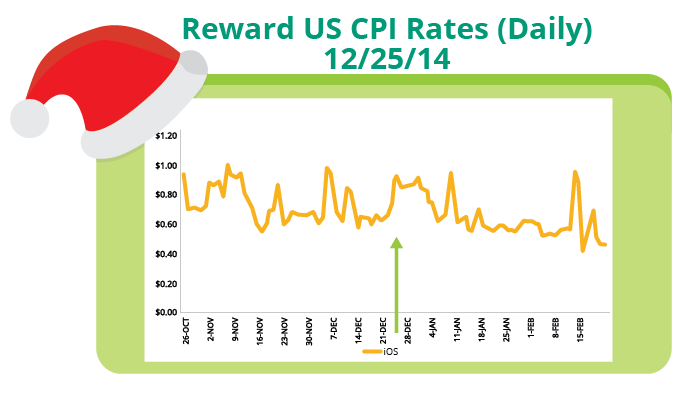 Now combining these two pieces of knowledge we can plan our burst appropriately!  By starting your burst campaign a couple of days prior to Christmas, you will save time and money but gain higher chart placement as we enter the peak of consumer interest, thus taking advantage of maximizing visibility in the charts at the lower potential costs. NativeX provides free, more detailed reports on the volume of installs and rates needed for you to achieve your target chart position this Christmas season.

OK, so technically this trick is an in-app trick, but it leads to app store optimization. Users who are highly engaged with an app generally enjoy the app more than those who are less engaged. Send highly engaged users a notification to review the app. For those who are less engaged, send a feedback form asking them how to improve their experience. This ensures a bit of filtering is placed on the users, thus cranking your overall app review stars average higher!  Higher review ratings lead to more installs.

Example:  Even with the same amount spent on app promotion and bursting campaigns, 4.5 star app will net 3.7 times more downloads than a 3.5 star app.

A similar trick to filter out the negative reviews and promote positive reviews of the app was utilized in EA’s Dungeon Keeper: 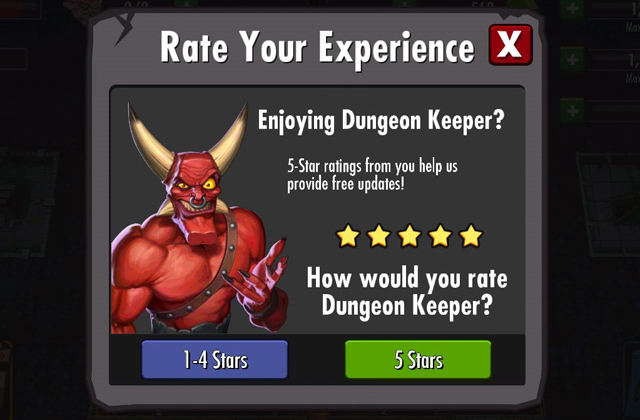 Cornell University did a study regarding the captivating marketing choices of children and eyes on cereal boxes. Cereal boxes that used characters with eyes looking at the children showed a significant psychological impact of desire by the child consumer. Similar studies have shown that eyes in the icons can have a “drawing in” impact and increased click-through rates from search to opening the listing to install. If your app icon can implement eyes… do so!  (Similar studies have been done on the psychological impact of color choices, fonts, etc.).