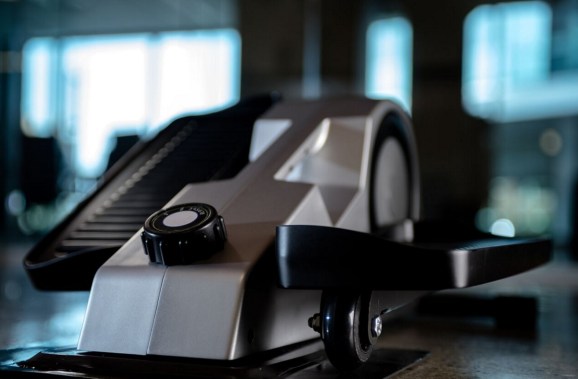 Cubii is an elliptical trainer that fits under your desk.

I sit at my desk and write posts all day for my job. My fingers get a lot of exercise, but not the rest of me. That’s why I’m looking forward to using Cubii, an elliptical trainer that fits under your desk and lets you exercise while you’re sitting down. In fact, this looks so promising that I’m going to make it my New Year’s resolution to use it every day.

I don’t even have to get off my ass to fulfill this New Year’s resolution. So I’m in. In fact, I’m using it as I write this. It’s simple and easy enough for me to do as part of a daily routine. Underneath my desk, I can’t escape it. And it can keep me honest. It comes with an app that connects via Bluetooth to my smartphone. It logs the revolutions, so I know how far I’ve traveled using Cubii each day.

You can use the app to set calorie-burn goals as well as distance goals. It sends you notifications in case you aren’t keeping up. That’s the kind of motivation I could use to stick to my resolutions. So far, my track record isn’t great, as I haven’t learned to speak Spanish, Mandarin, or Japanese. And I haven’t lost weight, climbed Mount Everest, read Ulysses, or done a lot of other stuff I’ve resolved to do in the past. 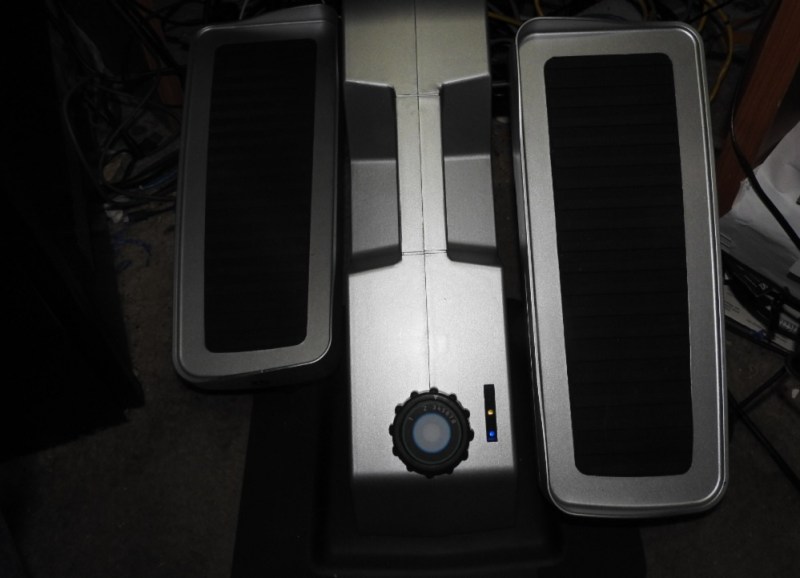 Above: Here’s Cubii under my desk.

Cubii comes from Fitness Cubed, which was founded by Arnav Dalmia and other graduates of the University of Chicago. Dalmia started the company to help people address “sitting disease.” Dalmia got the idea while working at an internship in a large corporation. He was sitting around a lot at his desk, and he figured it was very bad for him. So he sought a way to escape.

We wrote about the company in July 2014, when they were raising $80,000 for a Kickstarter campaign. They eventually raised $293,712, and they recently started shipping to all of the Kickstarter backers.

It costs $347. But it’s less expensive than changing around your office furniture or buying a standing desk. I’ve started tracking my activity via the Cubii mobile app. And Cubii wirelessly integrates with smartphones via Bluetooth. An open applications programming interface lets users sync their app to other fitness trackers too.

The founders — Dalmia, Shivani Jain, and Ryota Sekine —  started the company in Chicago in August 2013 with no prior experience in engineering or design. They put the product together through trial and error. The elliptical trainer is designed so that your knees don’t hit your desk. The smooth motion eventually becomes unconscious.

I had to assemble it by screwing the big foot pads onto the trainer. I added the covers for the wheels, and I plugged it into a USB charger. It takes about six hours to charge, and you need the battery charged so Cubii can talk via Bluetooth to the app. When the battery light is green, it is fully charged. The battery goes into sleep mode after four minutes of inactivity. You can also use Cubii offline, and it will update your app’s data the next time you connect.

Like a lot of people, I have a roller chair at my desk. But Cubii comes with a couple of round wheel stoppers that you can put under the wheels. That prevents your chair from rolling around while you are pedaling, and it makes pedaling a lot easier. 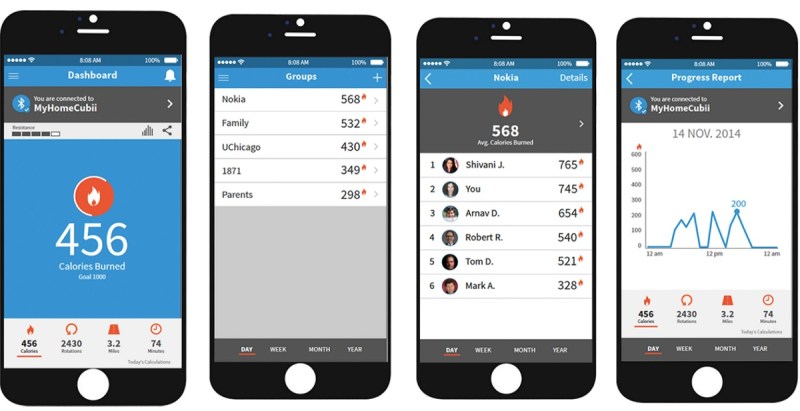 Above: The Cubii app logs your calories burned and distance traveled.

Some office managers might see Cubii as unorthodox, but the modern workplace is changing, and there’s more focus on the health and wellness of employees. After all, a healthier workforce incurs lower medical costs, has higher productivity, and faces lower insurance payments.

Rivals include TrekDesk, TreadDesk, Steelcase Walkstation, LifeSpan, Stir Kinect, other treadmill desks, and standing desks. But Cubii seems like a no-brainer. I’m going to give it a whirl. You can check in on me a year from now to see if I lived up to my resolution.

Check it out in the video below.