Windows 10 may have ended 2015 with under 10 percent market share, but Microsoft is starting off the new year with a strong announcement: Windows 10 is now installed on over 200 million devices. It took the latest and greatest operating system from Microsoft less than six months to hit the new milestone.

Microsoft had previously announced that 24 hours after its July 29 launch, Windows 10 was installed on more than 14 million PCs, and that it was on over 75 million PCs after four weeks, and 110 million devices after 10 weeks.

The biggest driver is, of course, the fact that the operating system is available as a free upgrade for Windows 7 and Windows 8.1 users during its first year. This is why, when compared to its predecessors, Windows 10 is being adopted more quickly (and also why this time Microsoft is counting “active devices” rather than “license sales”). 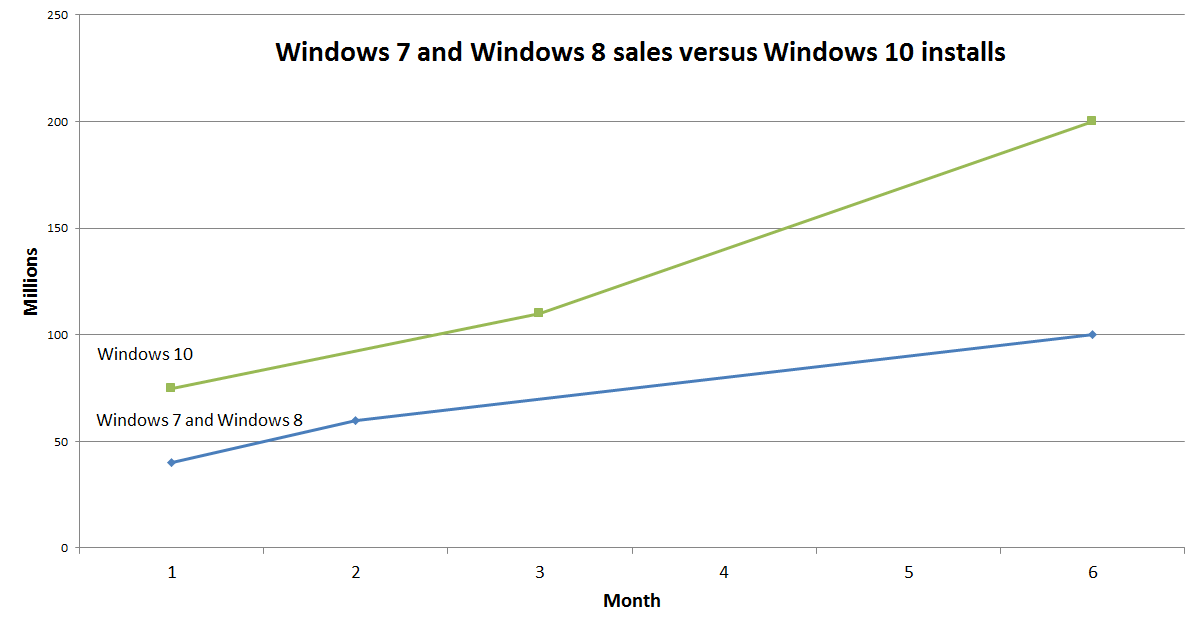 Keep in mind that Windows 7 and Windows 8 milestones were similar for the first six months or so, though it quickly became clear that Windows 8 was not selling as quickly as its predecessor had. In addition to the free upgrade, Microsoft also changed the game by including phones (Windows 10 Mobile) and other devices in its count.

Some more numbers from Microsoft today:

Microsoft also shared that the company is “seeing significantly higher customer satisfaction with Windows 10 than any prior version of Windows.” In fact, people spent over 11 billion hours on Windows 10 in December, alone, which Microsoft describes as “more time on Windows than ever before.” More specifically, the company reports:

Microsoft is aiming to have 1 billion devices running Windows 10 “in two to three years,” though that includes not just PCs, but smartphones, consoles, and other devices, as well. Indeed, speaking of consoles, Microsoft today also revealed that on December 28, more fans logged onto Xbox Live on Xbox One (the new experience is powered by Windows 10) than had on any other day in Xbox history.

As for other devices, the Surface Book (available in the U.S. and Canada) recently became available for pre-order in China and Hong Kong. Tomorrow, customers will be able to pre-order the Surface Book in Austria, Australia, U.K., France, Germany, Switzerland, New Zealand, and soon, Japan. The Surface Pro 4 is also heading to India “in the coming weeks.”

If the new Surface devices sell well, you can bet Microsoft will tout sales numbers along with Windows 10 figures. All Microsoft departments are contributing to the massive Windows 10 push. After all, while today’s 200 million-device milestone is a big one, it means the company has only hit 20 percent of its goal of Windows 10 running on 1 billion devices.