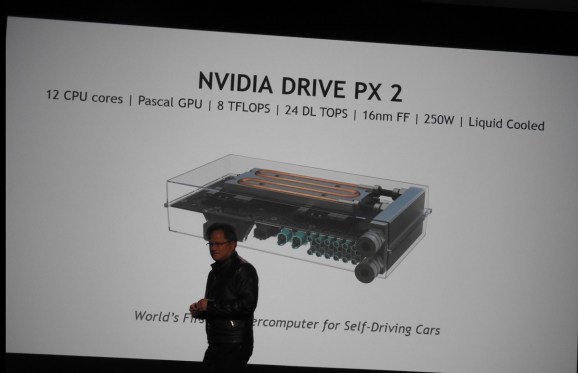 Nvidia announced its Nvidia Drive PX 2, a new supercomputer for the connected car.

Jen-Hsun Huang, CEO at Nvidia, said the supercomputer will be the key to the development of self-driving cars and technology that augments human driving.

Huang made the announcement during Nvidia’s press conference at the start of the 2016 International CES (the big tech trade show in Las Vegas this week).

Nvidia has withdrawn from the smartphone processor market and is instead focusing its efforts on automotive electronics. The new supercomputer uses a Nvidia Pascal graphics processing unit (GPU) and has 12 central processing units, or CPUs. The supercomputer can handle eight teraflops.

Huang said the supercomputer will lead to safer driving, new mobility services, and the redesign of urban architecture.

“Our vision is to create the computing platform by which we can achieve these goals,” he said. “The car is paying attention all of the time. It is a virtual copilot that will keep you out of harm’s way.”

A year ago, Nvidia unveiled its original PX supercomputer for the car. The new PX 2 is the computational equivalent of 150 Macbook Pros and could just about fit inside a lunch box. It can process 2,800 images per second, and is built with a 16-nanometer manufacturing process, compared to 28nm for Nvidia’s earlier Titan X.

“I’ll admit, I didn’t think it would take a water-cooled, 250 watt machine to successfully develop a self-driving car platform, but there a few things we need to keep in mind,” said Patrick Moorhead, analyst at Moor Insights & Strategy, in an email. “First, the challenge is enormous and evolving and it takes an enormous amount of compute power and secondly, like all technologies, the power and cooling requirements will go down over time. This is a real sweet spot for Nvidia for many reasons given GPU compute but also visualization.”