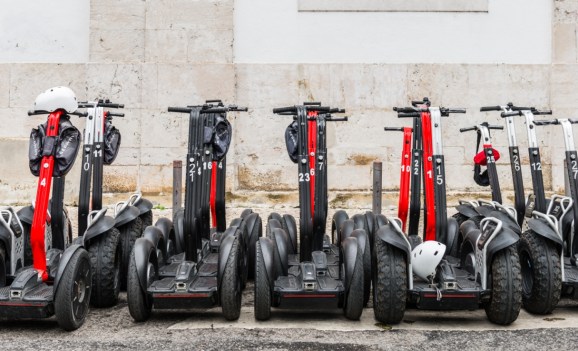 Segway is filing a fresh lawsuit against two companies, as it looks to tackle the “tremendous amount of confusion” in the self-balancing scooter market and counteract recent negative media coverage.

Founded out of New Hampshire in 2001, Segway became famous for its two-wheeled scooter that lets people traverse sidewalks by motor. The company is no stranger to filing complaints for patent infringements, having previously complained to the U.S. International Trade Commission about a number of Chinese firms. One of those was Ninebot, a company that subsequently acquired Segway.

Back in September, Segway and parent company Ninebot, alongside a research firm called DEKA that licenses its technology to the two companies, announced they were filing a lawsuit against Inventist, creators of the Kickstarter-backed Hovertrax transporter. Strangely, the Hovertrax has come to be known as a “hoverboard,” even though it doesn’t, in fact, hover. News emerged in November that Razor, makers of the popular scooters from the ’90s and ’00s, had acquired patent rights to the Hovertrax from Inventist’s head honcho, Shane Chen. And this leads us to today’s news that Segway’s legal team are now expanding their reach to include Razor. But that’s not where it ends — Segway is also filing a complaint against the similarly named Swagway, which creates a “hoverboard”-style device.

The complaints, filed in the United States District Court for the District of Delaware on December 23, allege that Swagway is infringing on several of DEKA’s patents and on Segway’s trademarks — presumably because of the company’s name (which does bear a striking resemblance). Razor, on the other hand, is merely charged with infringing on DEKA’s patents.

The crux of the complaint, it seems, stems from the rising negative coverage associated with self-balancing scooters. Besides the obvious flaw in their “hoverboard” nickname, a multitude of cheaper copycat devices flooding the market has led to widely reported safety issues involving falls and fires — Swagway is currently being sued for such an incident. Given Segway’s vested interest in preserving its brand, it is now making moves to distance itself from the competition.

“This latest filing is a continuation of our commitment to vigorously protect our brand and products,” explained Brian Buccella, vice president of marketing and business development at Segway, in a press release. “There is a tremendous amount of confusion in the market. Consumers are under the impression that the self-balancing products that have recently flooded the market and have received negative media coverage are manufactured and sold by Segway. Our brand’s renowned reputation for quality and safety must be protected.”

The legal waters are further muddied when you learn that Razor filed a lawsuit against Swagway last month for patent infringement. So with Segway now throwing its hat into the litigation ring, things are about to get a whole lot more confusing.