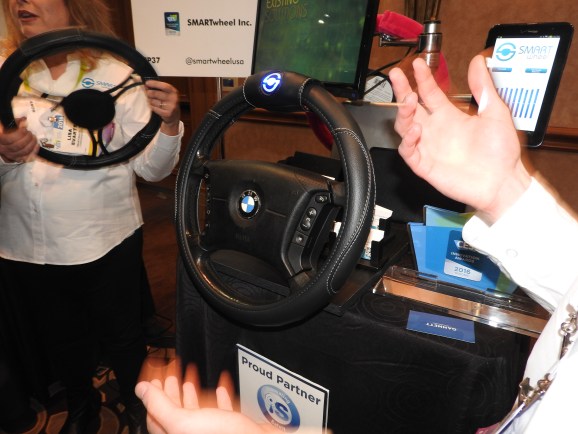 Smart Wheel teaches you to keep your hands on the wheel.

Distracted driving is an epidemic that makes us all want to move on to equally dangerous self-driving cars. But the Smart Wheel folks hope to change that with a smart steering wheel cover.

The device senses whether your hands are in a safe position on the wheel and delivers real-time reminders, if needed. Smart Wheel was on display at a party for the opening of the 2016 International CES, the big tech trade show in Las Vegas this week.

More than 424,000 people were injured in 2013 because of car accidents caused by distracted driving, according to a government study. Teens are four times as likely to get into a traffic accident as adult drivers. And they’ve grown up with more distractions, not least of which is texting.

So New Hampshire-based Smart Wheel created a tool that was featured on the reality TV show Shark Tank. It was pilot tested at the Massachusetts Institute of Technology and has been endorsed by President Barack Obama and the former U.S. Secretary of Transportation, Ray LaHood.

Smart Wheel is essentially a snap-on steering wheel cover that detects hand placement and uses an accelerometer to sense motion. It will be available in the U.S. in the middle of 2016 for $200.

It sends an alert if you have one hand off the wheel for too long, if you have both hands off the wheel at any time, or if your hands are too close together, suggesting you are holding a phone while driving. Used with an app, Smart Wheel can send a notification to a parent if you do something that triggers an alert.

For better or worse, Smart Wheel can’t take your car keys away. Only your parents can do that.