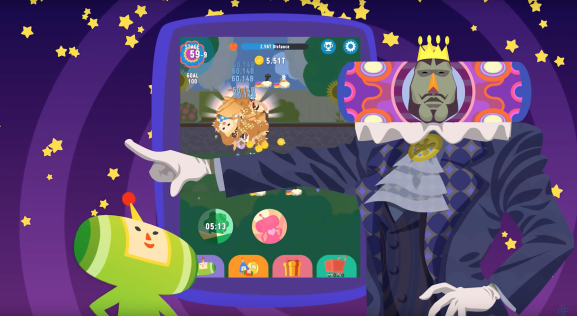 Look at how the King of All Cosmos is trying to block the game with his arm. It turns out that he can feel shame!

The zombie plague known as “mobile gaming” has bitten a console classic.

Tap My Katamari is the latest smartphone and tablet release from publisher Bandai Namco. But instead of trying to recapture the magic of the original 2004 PlayStation 2 game, Katamari Damacy, which had players rolling a ball around a 3D environment to collect trash and make a bigger ball, the company has made a clicker experience. This a game that has no skill.

In Katamari, all you do is tap the screen to move your ball. You can also purchase upgrades to make your clicks cover more ground at once. Or you can even purchase (with in-game currency) helpers that will click the screen for you. That’s right — the idea behind clickers, which are also known as incremental games, is to upgrade your character enough that you no longer have to play the game itself.

It’s insanity. These games reveal a dark truth about humanity, design, and the way our minds work. They show us that we don’t really care about challenge or improving. We just want numbers to turn into bigger numbers. That’s what gets the dopamine flowing.

Anyway, watch us play Tap My Katamari, which is out now for a short test period on iOS and Android in Canada and New Zealand: