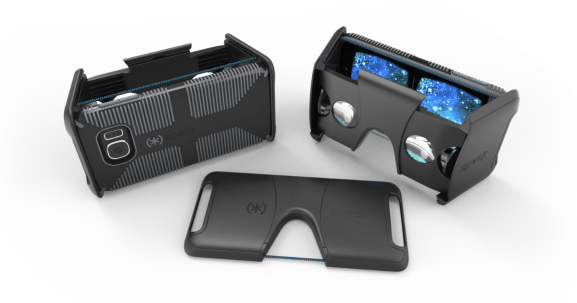 Everyone talks about how cool it is to have mobile virtual reality, but let’s get real for a second here: Google Cardboard isn’t the most durable or comfortable thing to have lurking in my pocket.

Mobile virtual reality faces a couple of design hurdles, and one of them is creating a viewing device that is both solid and portable.

Well, someone at CES claims to have figured this issue out. Speck, the Northern California mobile case manufacturer, has developed a hard, fold-out mobile virtual reality viewer called the Pocket VR.

The Pocket VR unfolds and attaches to a Speck CandyShell Grip case that is designed to fit an Apple iPhone 6s/6 or Samsung Galaxy S6 (no word on other mobile devices becoming compatible). Pocket VR is promising to be a much more durable viewing solution for Google Cardboard experiences than, well, Google Cardboard. Speck is bundling the Pocket VR attachment with the CandyShell Grip for $70 this coming Spring.

In order to show off the Pocket VR in action during CES, Speck has teamed up with virtual reality content producer Jaunt to create an exclusive virtual reality experience just for the show. We reached out for more details on what the experience is, but they seem to be keeping the specifics secret for now.