Influencer marketing is an area that is increasing in interest, and just as with other marketing tactics, new technologies are popping up to help you ride the wave.

And what a wave it is. Analysis by the likes of Burst Media and Tomoson show average returns of between $6 and $7 per $1 spent on influencer marketing.

With ad blockers causing all manner of issues for marketers, and consumers of any age becoming more reliant on social media than ever before, influencer marketing is an attractive alternative to traditional advertising and PR.

However, just as with any competitive landscape, each influencer marketing vendor entering the arena has a different approach.

Before I get into how it works, let’s break down the two primary routes influencer marketing platforms are taking right now.

Some tools focus on finding influencers by searching social networks for keywords and then scoring those who discuss those topics to help you find the most influential people. These tools sometimes offer messaging options to assist with contacting these influencers, but most leave you to manage that process yourself.

Then there are the influencer networks. These work in a similar way to affiliate schemes or advertising networks. On one side, influential people (and sometimes, noninfluential people) sign up. On the other, brands sign up. These platforms score the influencer and work out what they’re influential about, and then match them to brands that want to increase the reach of their offerings. If you’re a brand, instead of working to find influencers, you’re being matched with the right people, or they’re choosing you.

The jury is out on which approach works best. In theory, the latter is less work for brands but might not reach the very top influencers in your space. That could be seen as a benefit, since sometimes the magic happens when you reach out beyond the echo chambers that can exist with like-minded top influencers.

The latter is also where Buzzoole plays.

“From a brand perspective, Buzzoole identifies matches, engages the right and the most suitable influencers to a particular brand, making the process of implementing a campaign easier, cheaper, and faster,” Fabrizio Perrone, cofounder and CEO at Buzzoole, told me.

And what do the influencers get, according to Buzzoole? 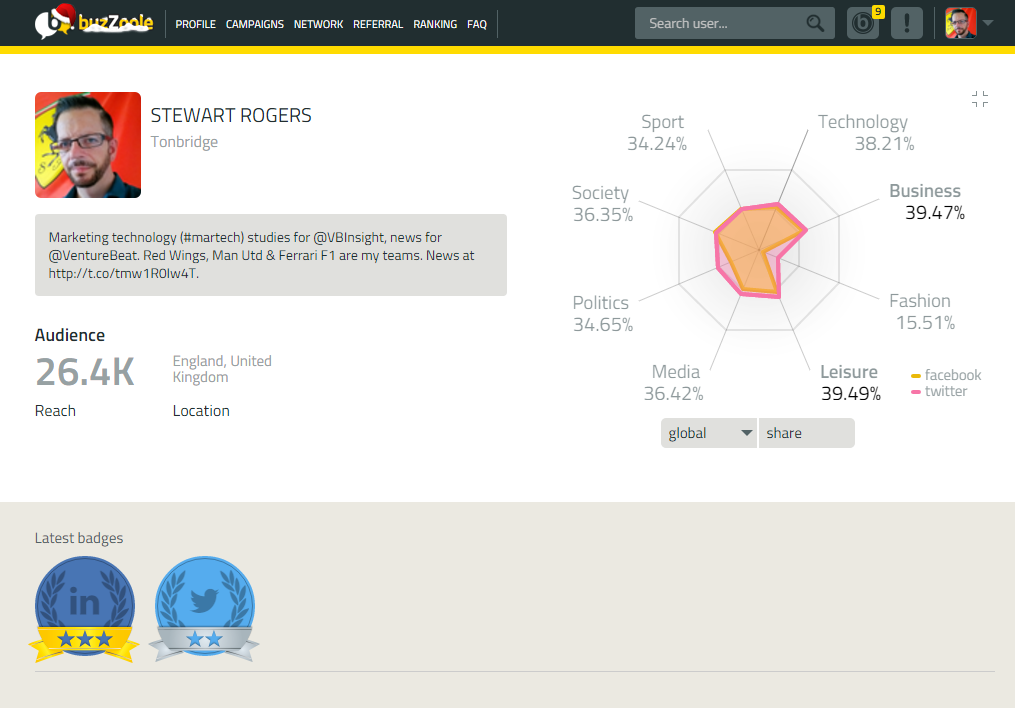 “Besides the fact that they can improve their social influence, they can easily be matched with brands they love to participate in their campaigns and spread the word about their products or services while at the same time being rewarded for it. We allow brands and influencers to have a single common space in which both can receive their own benefits,” Perrone said.

Buzzoole uses a unique algorithm that analyzes online conversations and identifies how influential users are within specific topics. The company claims that many other influencer marketing platforms measure social media users’ level of influence based on the number of likes and shares influencers receive, or simply allow the influencers themselves to define their topics of influence. Buzzoole attempts to do a better job by analyzing real-time social conversations, identifying what topics users are truly influential in.

I tried the service for myself. On Twitter, I have over 25,000 followers (a following that has grown through six years of tweeting). I also have various other networks of contacts on Instagram, LinkedIn, Facebook and more.

Immediately, I noticed that I’m not entitled to join any of the open campaigns, despite that sizeable Twitter following, which left me wondering what size of following is needed to use Buzzoole. Does the company run the risk of alienating influencers if it doesn’t allow them to be included in campaign opportunities?

“In order to participate in a particular campaign, a user has to be selected by our automated algorithm. A user is selected when he/she is deemed suitable for one or more campaigns in the platform. Meaning, the algorithm takes under consideration all of the requirements that a brand has asked for in its campaign brief, such as localization, category in which blogger/influencer is the most influential in, or level of his/her influence,” Perrone said.

So there’s a chance that, being in the U.K., I’m just not in the right geography. Many of the brands on Buzzoole, at this stage, are in the U.S. and Italy. That will no doubt change, with plans to open a London office early this year.

“If someone signs up to Buzzoole, it doesn’t mean that he/she will get his/her invitation email straight away. Rather, whenever there will be a suitable campaign for a particular user, Buzzoole will send the user an automatic invitation. There may not be a current campaign that matches your location or category of influence, but once there is, the system will notify you, and you can choose whether or not to participate. This algorithm is what makes Buzzoole’s system unique, because brands and influencers aren’t only matched based on numbers of followers, but rather when the match is relevant for both sides,” Perrone said.

Once accepted by both sides, the brand provides content to the influencer for use, in the hope they’ll spread the word on their social networks. Buzzoole assists brands in ensuring they provide the right kind of content.

“In terms of a campaign a brand, while filling its profile, inserts all the necessary information and materials, such as photos, videos, etc. We are always willing to help and advise our clients in order to make their briefs as interesting and clear (to influencers) as possible. We don’t provide full post examples, but we do provide guidelines that influencers are asked to follow. While we do want them to follow these guidelines, it is important for them to provide their honest opinions in their tone of voice that their audiences are familiar with,” Perrone said.

The jury is out still as to which of the two primary approaches will win the day in the fledgling world of influencer marketing technologies. Indeed, there is still time for other tactics and methodologies to be developed that will usurp these existing approaches.

Whatever happens, tools like Buzzoole are making headway with brands and influencers alike in a year that will see more companies dip their toes in the waters of influencer marketing.

Buzzoole is available today and is free for influencers to join. Brands pay on the basis of posts generated by influencers, the minimum budget being 500 euros ($540).