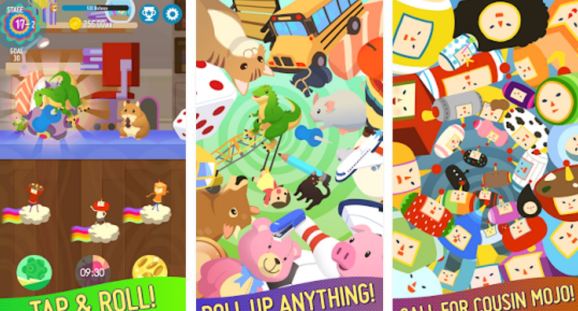 Go ahead. Install it.

I don’t know what you want when you play video games, but I bet it’s probably not a feeling of existential dread. If that’s the case, then you should probably avoid the newest mobile game from publisher Bandai Namco.

Tap My Katamari is an iOS and Android app out for testing now in Canada and New Zealand, and I’ve spent some time with it over the last few days. And by “spent some time with it,” I mean that I can’t stop playing it. This horrifies me because I hate this game. At the same time, no one is forcing me to play it. I can put it down whenever I want. Yet I don’t. And that’s because it preys on my weaknesses.

This realization that I lack the fortitude to put down something I hate because of the way it makes me feel has me doing some reflecting. I’ve started to think that it’s not the game that’s terrible — it’s me.

All of this led me to the conclusion that I can’t review Tap My Katamari until I review myself.

But before we get to that, let me explain exactly what Tap My Katamari is. It’s a “clicker” game, which some people also call an “idle” or “incremental” experience (read all about the rise of the genre right here). That means that all you do is click — or, in this case, tap the screen — to progress. For Tap My Katamari, each tap will cause your character to roll a ball of trash forward to collect more and make it bigger. As you tap, you’ll earn currency to spend on upgrades. These make your taps more powerful, which means you can roll your ball faster.

Of course, at the same time, the distance between objects begins to grow farther and farther apart. So you still need around the same number of clicks.

Think about that description for a second. Yes, I’m saying that the point of this game is to tap the screen repeatedly, and even as you “progress,” the gameplay doesn’t really change. The only difference you see is that the numbers that dictate the distance and the power of your taps will both grow over time. For example, I used to have to push the ball 10 meters to pick up a toy or whatever, and that would require around 50 taps. Now, at level 60-ish, I need to push it 10 trillion meters, which also takes around 50 taps. You see the difference? One of those numbers has the word “trillion” after it.

Oh, but it gets worse. Clicker games always give you the option to purchase certain upgrades that will click for you. In Tap My Katamari, you can hire your cousins. They will cause your ball to roll automatically, which means that you don’t even have to play the game to play the game.

Right now, as I type this, I can’t stop thinking about all the money my cousins are racking up for me. When I finish this — or maybe I’ll take a break from writing — I’ll have enough to afford so many upgrades. And now I’m excited to get back and do some tapping!

What is this? What is so broken about me that I get excited about playing this game that isn’t even a game?

Well, it’s time to find out in the world-exclusive review of GamesBeat reporter Jeffrey Michael Grubb.

Jeff is a top-notch taster of flavors. He’s not the best cook, and he’s usually too lazy to even try. But if you make him dinner or take him to Wendy’s, he’ll eat the hell outta some chicken or Tabasco sauce.

He mostly sticks to himself

Despite the way he may appear, Jeff doesn’t really want to bother anybody. You seem busy anyway — and he hasn’t really prepared any fun activities or humorous anecdotes to justify taking you away from the more important things in your life.

But Jeff recognizes that, and he’s going to let you get back to it.

Jeff is weak and delusional

Our poor Jeffrey pretends like he can see through a game like Tap My Katamari. He’s acting like this is all a joke, but that’s false posturing. The truth is that he really cannot stop playing this game, even though he wants to. He has deluded himself into thinking that he’s better than this game and the people who made it, but the truth is that Bandai Namco knows about his weaknesses and is happily exploiting them.

He is a terrible influence on others

To help cope with his weakness, Jeff has taken to social media to make jokes about Tap My Katamari. This is a defense mechanism to prevent himself from falling into a well of self-loathing. But this also has the unfortunate effect of causing other people to download and play the app.

@JeffGrubb Two of my coworkers just downloaded it and are blasting the audio.

Jeff is an awful person.

He gets agitated when you try to make him stop tapping

As evidence that his bond to this game has gone too far, let’s look at Jeff’s behavior around other human beings.

When his wife came home last night, she asked for some help getting things out of her car. This frustrated Jeff, who was actively clicking Tap My Katamari all through this conversation, because it meant he would have to stop “playing.”

He let this game, which he claims to understand isn’t a game at all, affect his behavior in a negative way around other people.

Finally, our frail-minded writer doesn’t care that he’s watching a game franchise that he adores wither and die in front of him. A game like this signifies that the publisher has given up on the series and is only interested in wringing as much money out of its fans as possible. This should offend Jeffrey enough that he puts the game down in protest. But he doesn’t.

On top of that, he doesn’t recognize the hypocrisy of complaining about the quality of Tap My Katamari while not having purchased any of the other entries in the series for almost the last decade — a franchise he claims to “love.”

Despite Jeff getting along famously with food, he really comes up short in other qualities we’d expect from a fully functioning adult. This is especially troublesome because he seems aware of his failings but doesn’t have the will to do much about them. Additionally, he doesn’t hesitate to shift the blame to outside influences that no one is forcing on him.

At this point, I can not recommend Jeffrey Grubb to anyone, and I would suggest waiting for a future update before thinking about becoming friends with him.

Jeffrey Grubb was provided to GamesBeat by Beverly and Michael Grubb for the purposes of review. He’s available now in Denver — although he’d rather you let him read his Star Wars books.