Parrot has created a unique drone that can fly for 45 minutes on a single charge and reach speeds up to 50 miles per hour. The Parrot Disco was unveiled at the 2016 International CES, the big tech trade show in Las Vegas last week. It is the Swiss company’s latest entry in one of tech’s fastest-growing markets.

About 2.9 million drones are expected to sell this year, according to an estimate by the Consumer Technology Association. Forecasts suggest civilian drones could be a multibillion dollar market in a few years. And Parrot’s booth was one of many in a whole section of exhibits for drone companies at CES.

The Disco is like a flying wing, but it has a motor. It can fly itself or follow instructions from you via an app. The drone can take off and land by itself, using its own autopilot. Using the Parrot Skycontroller, you can get a first-person view of everything it’s seeing on your tablet screen. You don’t need any training to fly the drone. 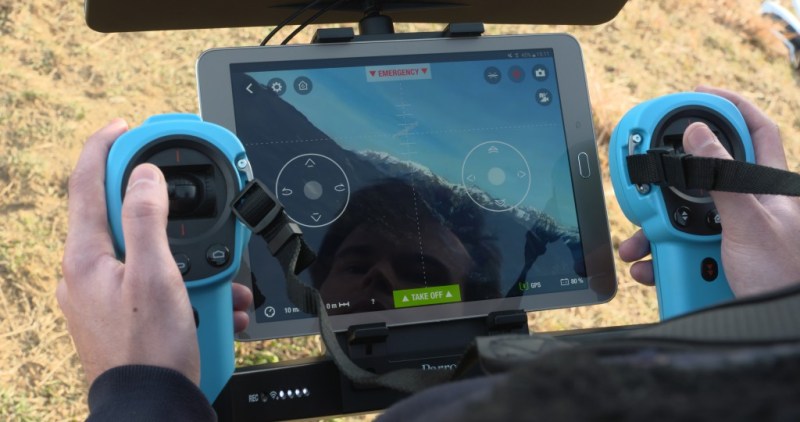 It has a wireless range of 2 kilometers. If it goes outside that range, it is smart enough to return on its own. It has built-in navigation that enables it to return to your location. When it returns, it can land in a linear way or circle in on a landing site.

To pilot the drone, you simply control the direction it flies, and the auto assist will keep the aircraft stable. The ultrasound sensor and camera on the bottom help keep the Disco stable, and it has a sensor in the nose that can slow it down if it goes too fast. The nose camera can take 14-megapixel images or record high-definition videos. You can record the video or stream it to another device.

“You can fly it to the ground yourself,” said Frederick Pirat, one of the designers of the drone, in an interview with VentureBeat. “Or it can land in a linear way or circle down.”

The drone can shoot video in 1080p video. You can wear 3D glasses and view the screen, which will make you feel like you are flying in the air. Parrot uses its own processor to power the drone and its camera.

While the drone is big, it is surprisingly light at 1.5 pounds.

“We wanted it to fly a long time, up to 45 minutes, and that’s why we needed the big wings,” Pirat said.

The Disco will debut in 2016, but the price hasn’t been set.

Check out the Parrot disco below, in a video with music that could win an Academy Award.