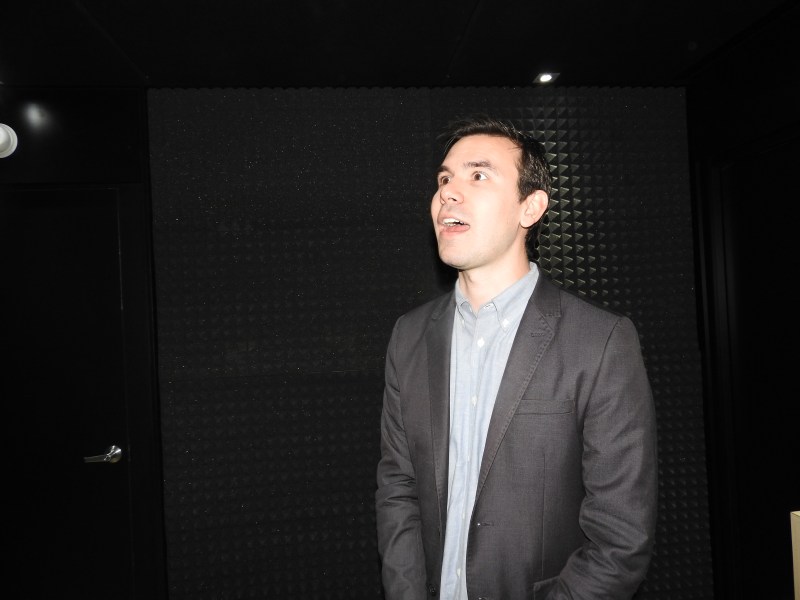 Above: Nate Mitchell of Oculus says high-end components will help deal with motion sickness from VR.

GamesBeat: So, there’s no dev kit anymore? I can just buy the consumer unit and start developing?

Mitchell: [Development Kit 1 and Development Kit 2] are sold out at this point. You can use this as your dev kit. We make the [software development kit], everything you need to get started, readily available.

GamesBeat: Why did you push Oculus Touch back?

Mitchell: We decided we wanted to take more time to get it right. As we’ve gone through more iterations, we released updated ID and ergonomic design pictures on the website. You can see some of the changes we made. It’s important for us to nail touch. Input is critical. This thing in your hand needs to feel great. It needs to track perfectly. It needs to be comfortable. We were already excited about where we were with Touch, but we made the call to go one step further. We felt like that was important.

GamesBeat: The business on top of selling the hardware, is it like the console razor-and-blades model? You make money on games, on store fees?

Mitchell: The app store has a pretty standard industry split between us and developers. We’re working with a huge number of developers to bring their content to the store and the platform. That’s just one element of the business. We have the Oculus Store available on mobile with Gear VR. It’s available on PC with Rift. These two areas are going to continue to grow, Gear VR probably a bit faster than Rift. There will be a huge number of users across the ecosystem that developers can engage with. You can build a pretty successful business on top of that.

GamesBeat: So, it is designed to be a profitable business?

Mitchell: Absolutely. [Laughs] We’re not going to be super profitable selling hardware with Rift, but this is just the beginning. Right now, one of the most important things is getting VR in the hands of as many people as possible. Developers want as many people out there they can sell to, so they can make their own profits and reinvest in the ecosystem. We’re committed to kickstarting the flywheel of the VR ecosystem in year one. 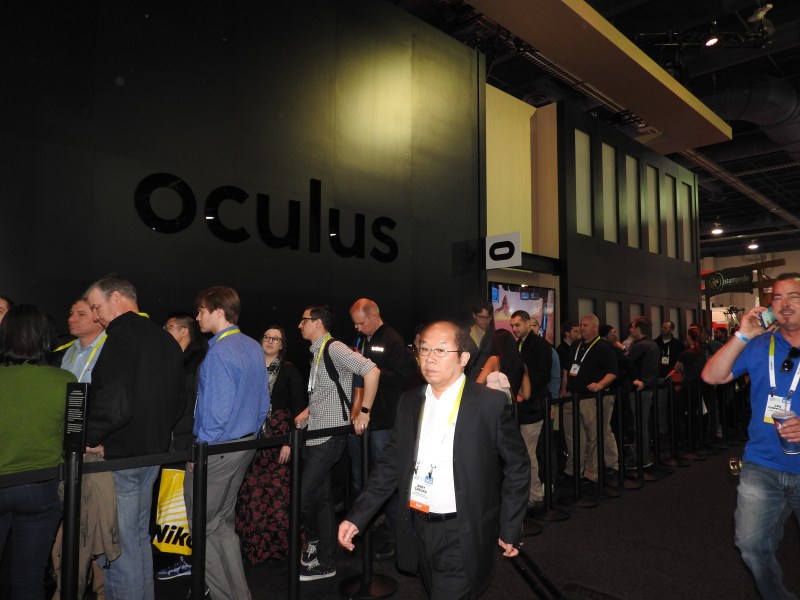 Above: There was a long line to try out the Oculus Rift at CES 2016.

GamesBeat: The console makers will sometimes take the extra step, because of their confidence in the rest of the business model, to sell hardware at a loss. Did you think about that?

Mitchell: We don’t want to sell hardware at a loss at this stage. That’s part of where we came from when we started the company. We wanted to run a profitable business on the hardware side, honestly. Right now, we’ve landed at this break-even point. That’s what we committed to. We felt like it was the right thing to do to kickstart this ecosystem. Maybe over time, we’ll decide to subsidize hardware. I’d much rather make a profit on the hardware, so we can reinvest that in our own team’s development to energize and speed up the overall VR road map.

We’ll see where it lands. For gen one, we’re at this break-even point. We feel good about that. Subsidizing costs more, especially as this thing goes up. We don’t want to dig too big a hole.

GamesBeat: How big have you guys grown now?

GamesBeat: Is there something special about the date, March 28? Was that the soonest you could do it?

Mitchell: We just felt pretty good about March 28, both in terms of the number of units we’ll ship and the number of pieces of content that will be available for launch. It felt like the right moment. It was about getting a substantial number of units so that it will go out to a good set of people who are excited about it. It’s about getting our software stack polished and ready. It’s about content. When you take this home and plug it in, you want there to be some awesome experiences in the store. A couple of developers announced today that their launch date will be March 28 as well. All those things just need to converge at the same time to have an awesome launch. It’ll be an exciting couple of months. 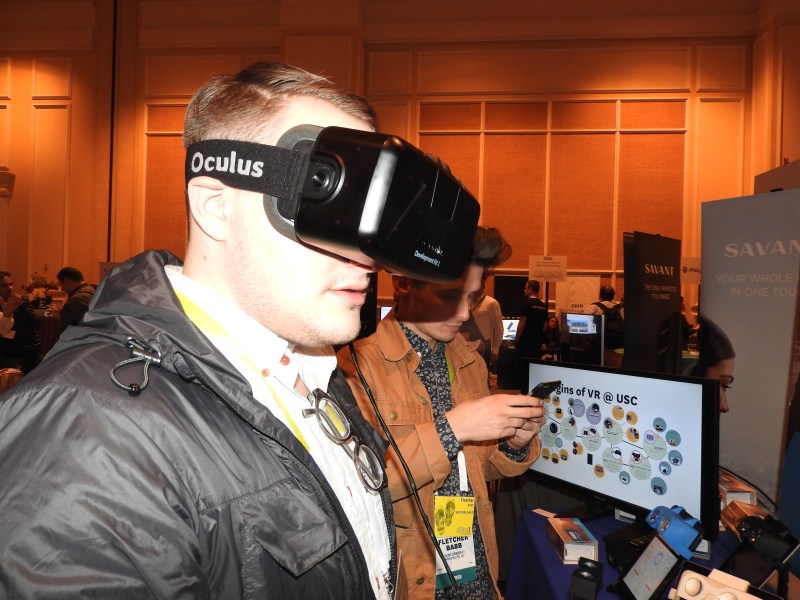 Above: Harrison Weber of VentureBeat tries out an Oculus Rift.

GamesBeat: HTC seems to be your biggest competition.

Mitchell: We’re in the VR section here at CES. [There are] a lot of VR headsets, VR input devices, VR software products here. Competition, we think, is good for the industry. We have our strategy. Other people have theirs. It means more headsets, which means more users, which means more developers, lower prices, and scaling the industry and the ecosystem. From that perspective, we want to see as much competition as possible. Obviously, we want to be the best, but competition helps all of us.

GamesBeat: What about other hardware, not necessarily headsets? One of the most impressive controllers so far is uSens, the hands-free controller. To me, that’s how VR input ought to be by default. Is there any barrier to other hardware working with Oculus?

Mitchell: We’re already seeing all sorts of people do crazy stuff. We’re not supporting it officially. We don’t have a good program to bring them in and make them a certified partner or anything like that. We’re focused on delivering our own product and making that awesome. But obviously, people are building all sorts of accessories for VR. Custom controllers, custom tracking devices … they can attach those however they want.

I would respectfully disagree with your assessment on input. There are three categories we have. We have remote, which is perfect for picking something up off a desk and watching a video … or playing a simple game. Or, I want to show you VR for the first time. You know what a remote feels like. Then, the gamepad for gamepad experiences, like Lucky’s Tale or Edge of Nowhere. Then, you have Touch, which is this natural hand presence. 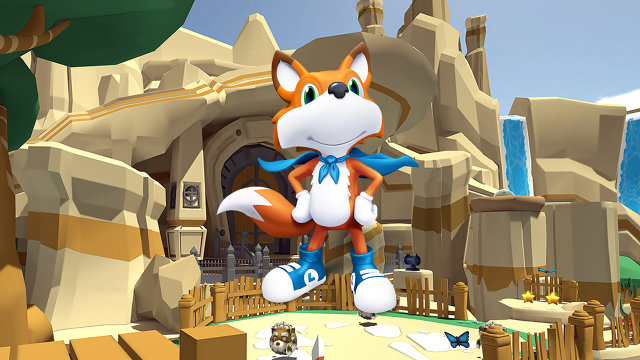 Above: Lucky’s Tale is an upcoming game that will work with Oculus Rift.

The nice thing about Touch is that you can’t have the experience you have in Bullet Train just with your hands. The lack of haptic feedback is limiting from a developer perspective in terms of the experiences you can create. Especially from a gamer’s perspective, you want something like Touch — with buttons, feedback, haptics, all the custom stuff — to enable the depth of the experience.

Just hand tracking is going to get a lot better pretty fast. For social, it’s the best option because then you can see what I’m doing. I can wave at you. You’ll get more tracking of faces in there. That will move forward quickly. In terms of social experiences, I think you’re right. Natural feature tracking of humans is going to be the way to go. But in terms of a game, it’s hard. You can’t feel what you’re interacting with. It’s a challenge.

GamesBeat: Do you have a sense of what the launch titles will be like?

Mitchell: We haven’t announced a full launch lineup yet. Lucky’s Tale and EVE: Valkyrie will be there at launch. I think we’re saying dozens of experiences at launch and roughly 100 experiences over the course of 2016 with 20 exclusive titles coming from Oculus Studios that we’ve funded and developed in tandem with developers like Insomniac. We’ll reveal the exact launch titles through our 30-60-90 day launch window over the next few weeks. A lot of developers have been waiting for us to announce our date. You’ll see more developers standing up this week and next to say they’ll be there at launch.

GamesBeat: It’s crazy that you got EVE: Valkyrie to be essentially a pack-in.

Mitchell: I’m pretty excited about Valkyrie. We’re doing the whole Founder’s Pack, which includes all these in-game goodies. CCP is announcing all the details on that. 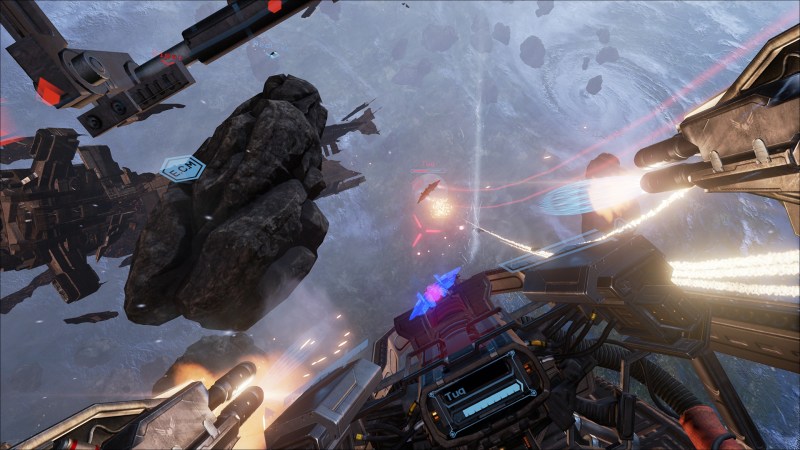 Above: CCP recognized early on that space combat is a perfect fit for the Oculus Rift.