Ford plans to launch 13 electric vehicles by 2020 (a $4 billion investment) and is creating its own fleet of research vehicles that will be able to drive themselves. The modern car company sees itself as not just a part of the $2.3 trillion auto industry, where it has a 6 percent market share, but as a member of the $5.4 trillion transportation market.

We attended Ford’s press event at CES, the big tech trade show in Las Vegas last week. At the event, Ford CEO Mark Fields said the company would triple the number of autonomous vehicles it is testing and adopt Velodyne’s solid-state hybrid Ultra Puck auto sensor for precision mapping. Ford is partnering with drone maker DJI to develop drone-to-vehicle technology for emergency services. And it is also working on ways that you can send voice commands to your car to get its motor running in the morning.

After the press event, we sat down with Don Butler, executive director of Ford’s connected vehicles and services, in an interview. Here’s an edited transcript of our conversation. 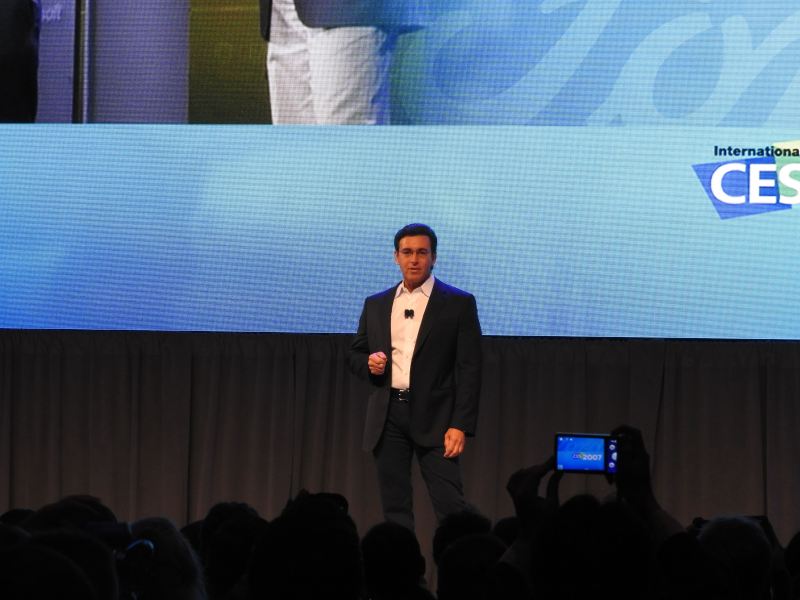 VentureBeat: If you have a bunch of electric vehicles coming, what sort of percentage of the whole is that, and at what time?

Don Butler: Electric vehicles, for us, represent a means of attaining some of the efficiency requirements we have. Either fully or partially electrified vehicles will represent up to a quarter of our lineup within the next five or so years. Now, part of that will depend on consumer appetite for those vehicles. We have to make sure that they’re desirable, that they meet consumer expectations.

Also, when we look at fuel prices, we need to make sure we get, at least within the U.S., the chance for the government to reassess the standards and understand what’s feasible. We can make [the cars], but we need people to buy them.

VB: On autonomous vehicles, some people thought you were going to talk more about Google and some kind of alliance?

Butler: Did they? [laughs] Not sure why they’d have that opinion. We work with a number of partners, as our CEO has described, underneath this umbrella we call Fort Smart Mobility. Whether you’re talking connectivity, or some of the mobility experiments and services we’re looking at, the overall customer experience — We used to say our customers’ digital lifestyles are connected lifestyles. That’s understood now in autonomous driving and big data and analytics.

We recognize that we will need to work with partners in the space, because as we look at the vehicle as more than just a piece of hardware that moves you from A to B, we’re increasingly looking at the vehicle as a platform for the delivery of services. Some of those services we’ll be able to deliver end to end. Financing. That’s a good example. Ford Credit, we can do financing for you. Other services we’ll connect with partners that are already developing their own ecosystems. We’ll take advantage of that development without having to do it.

What we’re doing with Amazon is a good example. Amazon, the Echo device, and the Alexa cloud platform, they’re already in the home, in many homes. They’re already connecting with other smart things in the home. Rather than us stitching together that network, why don’t we partner with someone who already is putting that network together and create a way of seamlessly interacting with them?

When we look at autonomous vehicles, we’ve been working on that for more than a decade. It’s not as if we need a partner to come help us. We are open to working with partners together to create autonomous vehicles, but it’s not a situation where we become a contract manufacturer for someone. We talk about news when it’s ready to be talked about. What you saw today, we talked about our partnership with Velodyne, our work with the University of Michigan. We’re continuing to advance on the autonomous front. As developments occur, we’ll be sure to communicate about those.

VB: I’ve read a bit about some of the challenges for self-driving cars. I wonder what you think is the state of things in that field, how far the research has gotten.

Butler: The research has advanced quite a bit. That’s one reason we’ve moved from the pure research phase to what we call the “advanced engineering phase.” The pure research phase is one around just feasibility. Is it feasible to have a car drive itself? Now we’re in a stage where we’ve proven that. Now the question is, how would you implement it? That’s why we’re expanding our fleet, moving from about 10 vehicles to about 30.

The technical side is coming along really well. The thing we need to work on is continuing to refine the algorithms and our sensor technology. You see an example of that with Velodyne, working with them to shrink the size of the LIDAR [Light Detection and Ranging] sensor. Our goal is what we call level four autonomy, which is fully autonomous, driver out of the loop, but only in known geographic locations and known conditions. That’s what we’re aiming for. From a technical standpoint it’s very much within reach, within the next four years.

What we need to work on at the same time are some of the regulatory and liability issues. Some of the societal issues in terms of autonomous vehicles interacting with vehicles that are being driven. It’s a situation where the landscape continues to evolve. We’re evolving and adapting with it. We’re focusing on the technical challenges and working with other partners, like universities and governments, on the regulatory, liability, and societal sides. 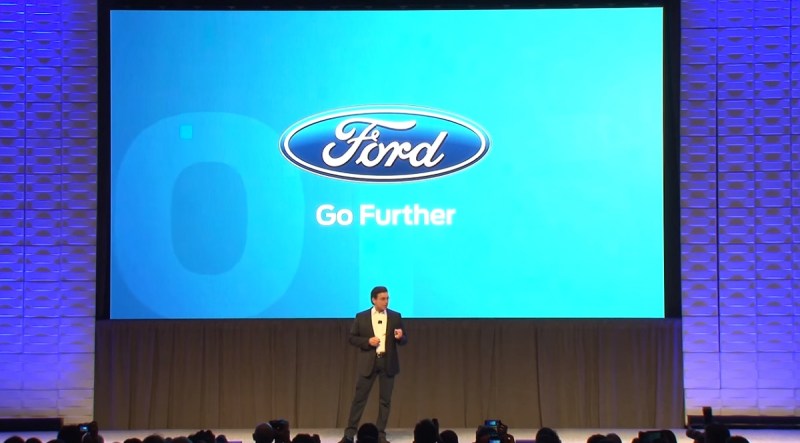 Above: Ford CEO Mark Fields says people searching for parking cause 30% of congestion.

VB: Things like LIDAR, are they the likely path for tackling that problem?

Butler: From the exposure I’ve had, LIDAR and its ability to, first of all, do 360 degrees, and then the ability to do precise 3D mapping –That’s critical. And then for the vehicle to have a really clear sense of where it is within that environment. We think you can’t just rely on cameras or radar or other sensors. We think it’s a combination of all of those that’s going to be necessary.

One of the challenges is those unanticipated or unexpected things. It’s fairly easy to map a static environment, and even to map the roadway and expectations of what happens on it. There’s no way to map pedestrian behavior, or the behavior of the bicyclist right next to you and what happens if they don’t obey a stop sign.

Encountering those situations and understanding the parameters that lead into that will impact and affect those deep learning algorithms. But we’re all exploring similar territory. We’ll be working partners where it makes sense, bringing our own knowledge and expertise to bear.

VB: And then the other big problem of just waking up the human.

Butler: That’s why we’re focusing on level four. There are two different paths happening. What we call the semi-autonomous path, levels one through three, the driver will still need to be engaged, but we’re doing things to assist in the driving experience, like adaptive cruise control or panic stop braking. But we believe that when you’re in autonomous, you need to be in a situation where the vehicle can drive itself.

We’re looking at what that means. How do you operate in a situation where you have to hand control back to the driver? That’s a tough area. Other than saying, “You need to keep your hands on the wheel.” It’s interesting to look at companies like Tesla and what they’re doing with autopilot. It’s funny. It even says “Beta” on the screen, and yet it’s out in production. Our goal, though, and what we’re working on with our autonomous fleet, is level four, driver completely out of the loop. 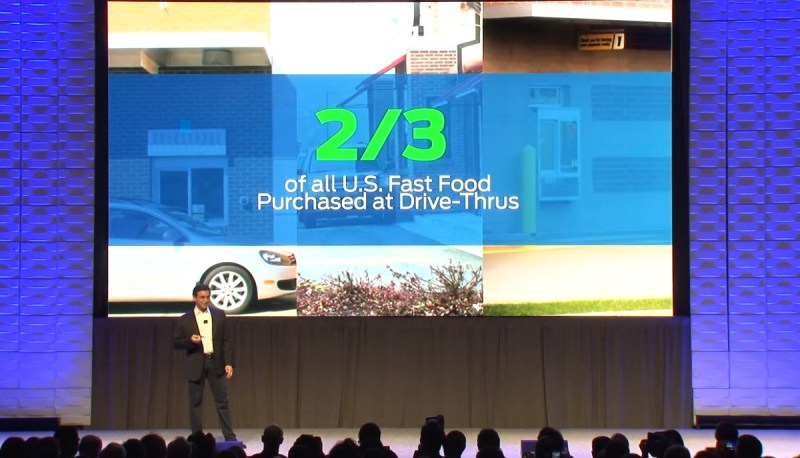 Above: Ford CEO Mark Fields has stats on how the roads are getting more congested.

VB: It still seems like the problem that Mark painted about how crowded cities are going to get isn’t all that solvable with smarter things.

Butler: It’s certainly more addressable. The smarter things are, the more connected they are. Then we have the opportunity to do things much more efficiently – things like route-planning and logistics. We have a partnership with a fleet services company called Telogis. They work with other companies that have large fleets of vehicles. They help them manage those fleets. Most of those vehicles happen to be Fords, so we’ve worked with them to provide telematics capability within vehicles to do things like managing and monitoring fuel consumption, logistics planning, map pathing, and planning for those vehicles out in the market.

If everything can become that much more efficient by being connected, you reduce congestion. You reduce traffic. Things become more efficient. We’re also working with cities. Even our Go Drive pilot, we’re working with the city of London on understanding their goals and how we can participate with them in helping to achieve those.

Certainly the challenges that Mark outlined are daunting. We also recognize them. We’re not hiding from them. We’re taking steps to address them. The more connected our world is and the more willing we are to work with partners, I think we will find solutions.

Butler: Another great example of working with partners is, again, what we’re doing with Amazon. The point of this whole notion is, we understand that the vehicle is no longer just a piece of hardware that gets you from A to B. We are no longer just in the vehicle hardware business. That represents, if you saw the presentation today, $2.3 trillion of revenue. The transportation services business is $5.4 trillion. Even beyond that, the commerce that’s conducted while you’re traveling represents an even bigger and broader opportunity.

For us it’s about interacting and intersecting with those areas of opportunity and understanding how we can put enablers in place — like App Link inside our vehicles for connecting with smartphone apps – to help create this new future. The important part is, we’ve been around for 113 years. I think we’ll be around for many more years beyond that. We’ve demonstrated resilience. Things that have been disrupters in the past, we’ve looked at as opportunities, and we look at today in a similar way.

VB: It’s like railroads and the transportation business. Which are you in?

Butler: We’re definitely in the mobility business. That’s what we’re in.

VB: It made me think of Ford Airways, Ford Tollways…

Butler: Or working with partners in those areas, for sure. 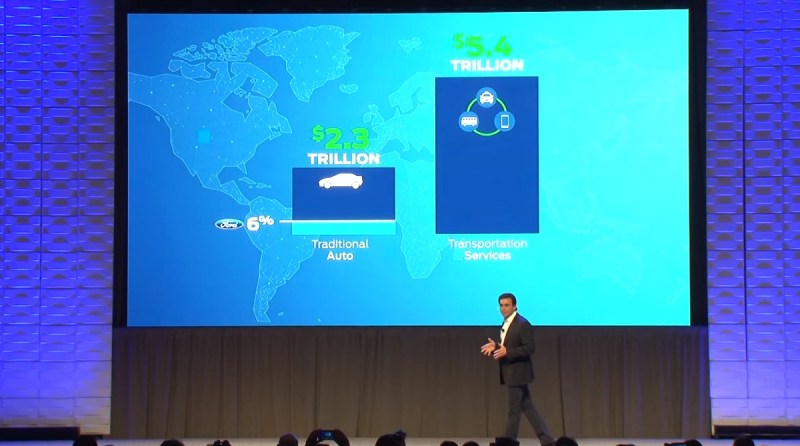 Above: Ford CEO Mark Fields wants to move beyond cars into transportation services.