Tharsis is about humanity’s first manned mission to Mars — and all of the ways it can go terribly, terribly wrong.

While on its way to investigate a mysterious signal originating from the red planet, the spaceship Iktomi suffers damage from a micrometeoroid storm. Its four surviving crew members must then battle various mechanical issues, food shortages, and bad dice rolls to reach their destination alive.

Tharsis is, at its heart, a board game from indie developer Choice Provisions out on January 12 on PlayStation 4 (reviewed) and Steam (PC and Mac).

The Iktomi has eight modules — Flight Control, Greenhouse, Life Support, Medical Bay, Maintenance, Operations, Pantry, and Laboratory. During each of Tharsis’s 10 turns, one or more of these areas will experience a disaster — an oxygen leak, a bent antenna, meteoroid strikes, fires, etc. How the player deals with these catastrophes depends on rolling dice. Each astronaut has a number of dice they can roll per turn, which are spent to make repairs, harvest food, or complete research projects. For example, if a repair costs 15 to fix and one astronaut roll three 5s, they can make the repair successfully. If they roll a combined total of, let’s say, 11, they can use it to pay down some of the cost of the repair, but another astronaut will have to complete it. You can also spend these rolls on the aforementioned research projects, which provide a temporary boost, or on other bonuses to your food supply, stress levels, astronaut health, and more.

From there, Tharsis becomes a game of careful micromanagement and decision-making. Do you fix that oxygen leak and prevent the crew from taking damage? Or do you try to prevent damage to the ship instead? Do you spend dice to grow food in the greenhouse, or do you use them to activate some of the astronauts’ special skills? If you’re lucky, you will accomplish a few of these tasks, but doing all of them is impossible. You’ll have to make some tough decisions if you want to complete your mission, including whether or not to chow down on a dead crew mate to survive.

Tharsis will draw obvious comparisons to Subset Games’ excellent 2012 space simulator, FTL: Faster Than Light. Both are about the unyielding brutality of space and the many ways you can die there. And Tharsis can be brutal, even unfair. Poor die rolls can doom the Iktomi early, ending the game by the second or third turn. Three types of hazards — injury, void, and stasis — can prevent you from making necessary repairs and potentially kill astronauts. Neglecting your scarce food supply will leave you without dice to roll, forcing you into cannibalism to progress.

As a fan of games like FTL and From Software’s Souls series, I enjoyed Tharsis’s challenge. It took me 28 tries over more than five hours to successfully reach Mars on Normal difficulty, and I probably owe that victory to luck as much as to strategy. But finally achieving that victory felt pretty damn sweet. 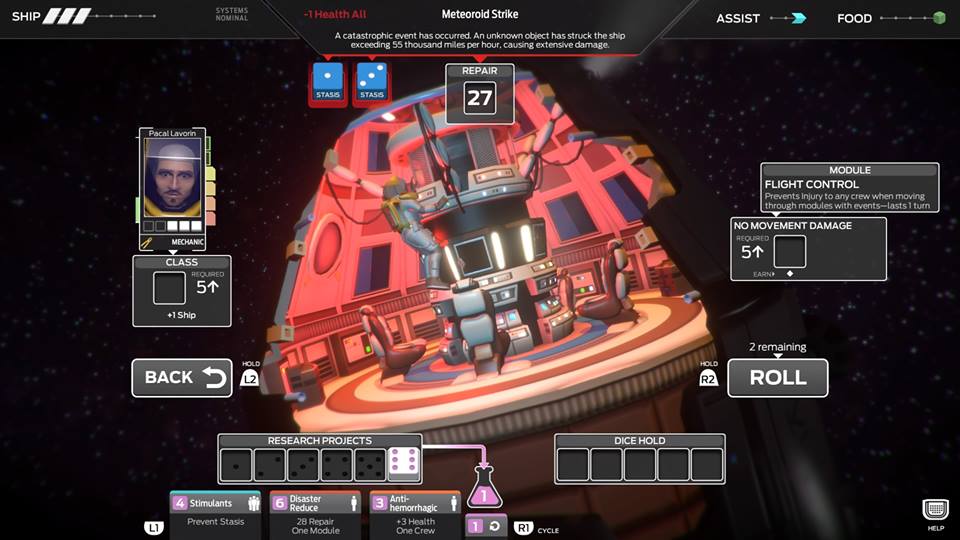 Above: There’s a lot going on in Tharsis, and not all of it is explained well.

Tharsis has a lot of things going on, and it doesn’t explain some of them well enough. The tutorial covers the basics, but it could take hours to fully grasp all of its mechanics. It took me a while to figure out exactly how Research Projects worked, while Stress is still a bit of a mystery. Each astronaut has a Stress meter, and certain actions cause it to rise or fall. I ended my first successful mission to Mars with 70 percent Stress, but I couldn’t tell if it impacted anything more than my final score. While everything clicked eventually, Tharsis could do a better job of explaining the rules.

Unlike FTL, which has many random scripted events to help keep it fresh, Tharsis suffers from repetitiveness. Once you’ve reached the red planet, you’ve seen most of what the game has to offer. Its sparse story is told through some lovely hand-drawn cutscenes and voice acting, but after you’ve seen those cutscenes a few times, you’ll likely just skip them. It has a Hard difficulty setting for people who really hate themselves, and it also has a few unlockable astronauts to earn, but that’s pretty much it.

How you feel about Tharsis probably depends on how you feel about board games, soul-crushing challenges, and shorter gaming experiences. If you love tabletop games, repeatedly dying while learning, or heavily micro-managing resources, Tharsis is a worthwhile way to spend an evening.

Tharsis is available on January 12 in North America on the PlayStation 4, PC, and Mac. The developer provided GamesBeat with a copy of the game for this review.