After four days of journeying through some of the 2.47 million square feet of exhibit space at the 2016 International CES, I felt like I had a good download on the patterns and trends that I was seeing over and over again. My Intel Basis Peak smartwatch told me that, over four days at CES, I walked 73,376 steps, or 18,344 per day.

That set me up for this post on the top trends of the tech industry’s biggest North American trade show. These are the trends that affect more than one company, or send a signal that a new category or sub-industry is rising around this trend. Revolutionary products, of course, may be one of a kind. And we didn’t really see anything obvious on that front. But trends indicate that something that has been talked about for a while may finally be at the point where it’s becoming real. Many of these trends develop over multiple years, starting as ridiculous or too expensive, and eventually graduating to smart and useful.

So what did we find? Forget about TVs and smartphones. There’s more innovation happening in previously dumb objects, thanks to the Internet of Things, and in virtual reality devices. I would like to say that the tech industry is becoming more inclusive and tolerant of diversity, but the keynote speech by Intel CEO Brian Krzanich was the only place where I saw evidence of that. So it doesn’t really count as a trend, even if the world’s biggest chip maker is behind it.

For the sake of comparison, here’s our top trends from CES 2015 and CES 2014. And without further ado…

The Internet of Things has become useful 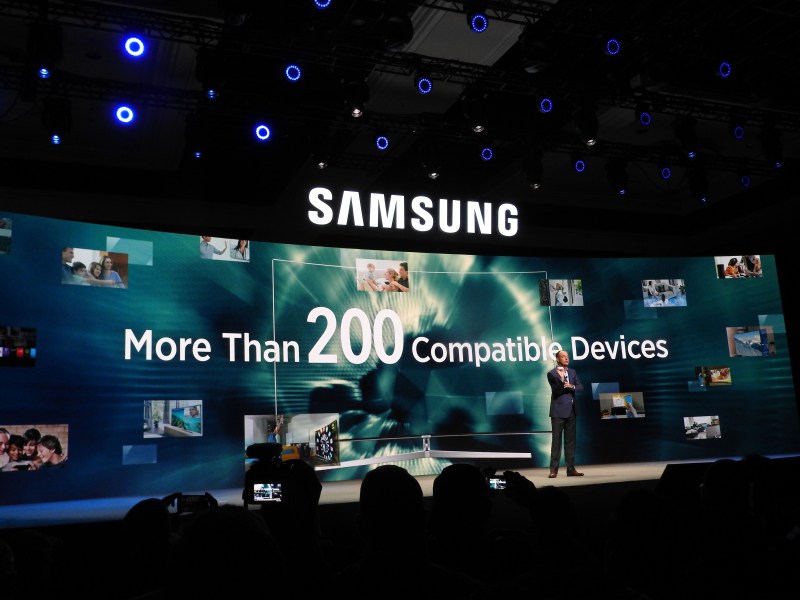 Above: SmartThings has 200 compatible devices for Samsung’s version of the Internet of Things.

In years past, the Internet of Things has been touted as the savior of the technology industry. It simply means making everyday objects smarter, by adding a computer, and connected, by hooking it up to the Internet. These smart things can generate data that becomes more useful, and they can operate without human intervention. In the past, we thought many of them were funny and silly, like the $250 pet feeder for people who are too lazy to feed their pets with a 50-cent plastic cup.

I’m still not into $99 flowerpots (sorry, Parrot). But the prices for these smart objects are coming down as companies like Intel, Samsung, and many others make components that are more powerful and inexpensive. Intel said its Curie embedded devices chip will cost less than $10. Moore’s Law is helping on this front.

The technology actually has to be smarter as well. Cypress has come up with processors that can handle sensor input and operate in the field — with no batteries. These devices can operate on kinetic, solar, or thermal power. That means we won’t have to replace 20 billion batteries. The smart devices are better when they are connected, too. To connect devices together, Panasonic announced an Internet of Things platform dubbed Ora, while Samsung said it has more than 200 devices in its SmartThings platform. More than 900 companies out of 3,800 at the show said they had Internet of Things products. The Internet of Things is a giant ecosystem. It still needs standards that ensure that cross-vendor solutions work together. But the ecosystem is getting better.

The ideas do have to be clever too. We will pay some money to do something that we’re too lazy to do. Samsung’s Family Hub Refrigerator looked refreshingly useful, in contrast to its web-connected fridges in the past. The new one has a calendar you can update via a mobile app, and it has three cameras that show you what’s on the shelves on the inside. That lets you know what you need to buy at the store. This gives you a reason to have a smart fridge. We don’t know exactly how much these things will cost yet. But examples of smart things — like the Netatmo security camera that can discern people, pets, and cars in your driveway — were plentiful at CES 2016. The best ideas combine inexpensive sensors, computers, connectivity, and big data analysis to produce insights on behavior. 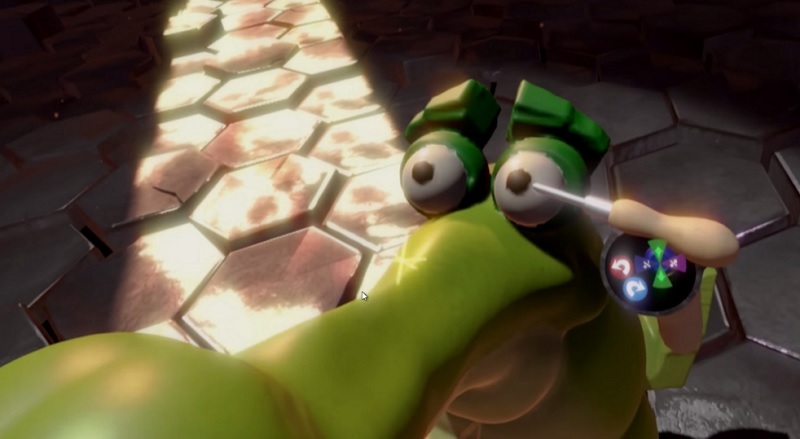 Above: Medium for the Oculus Rift virtual reality headset

Digital art is going to be one of the big beneficiaries of virtual reality. I was blown away by the quality of some tools for artists in the new medium of VR. Oculus VR showed off Medium, a “paint app” for VR. This app makes you feel like you are inside the 3D sculpture that you’re creating. It takes a couple of minutes to learn how to use your virtual hands to create sculptures, paintings, and other 3D objects. You wear the Oculus Rift headset over your eyes and grip the Oculus Touch controllers in your hands. You can make sweeping brush strokes by moving your hands. It’s easy to repeat patterns, erase mistakes, or rotate the sculpture in 3D so you can see it from another view. The HTC Vive also has a cool painting app from Google called Tiltbrush, where you can step inside a digital space and paint with your hands.

I also felt the artist in me smile when I looked at Media Molecule’s newest game, Dreams, coming to the PlayStation 4. Dreams is blank slate, where you can use Sony PlayStation Move controllers to craft your own video game space with a minimum of effort and some very cool visual effects. Microsoft has also shown off a version of its HoloLens augmented reality technology for makers of user-generated content in Minecraft. I’m pretty sure that, once all of these 3D art tools are out there, you’ll be able to use 3D printers to print them out in the real world. If you add all of this up, I think that the tools for making digital art are going to take a big leap forward. VR is going to have many different applications, and it will have the potential to transform the way we do things. This is just one of its surprises.

Household appliances are getting an overhaul 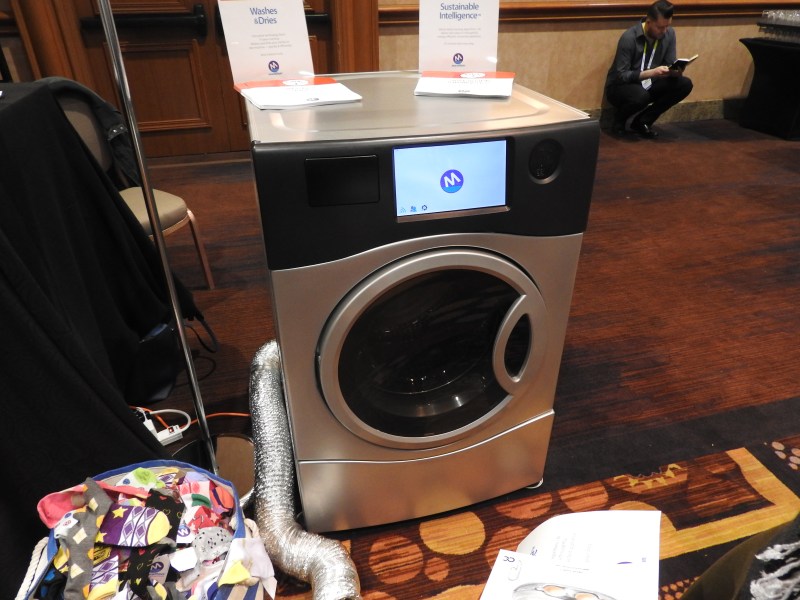 Above: Marathon Laundry combines washing and drying into a single cycle, and it connects to the Internet.

Marathon Laundry came up with a side-loading machine that combines both washing and drying into a single cycle. It also connects to the Internet, but the combo washer-dryer seemed more interesting to me. Samsung also came up with a feature, AddWash, for a side-loading washer. It lets you add forgotten clothing to your washer, even after the load has started. And LG had a washer that could automatically dispense the right amount of detergent.

Samsung of course had its Family Hub Refrigerator, which has three internal cameras that take pictures of the food shelves whenever you close the door. That way, you use an app to check to see what is still in the fridge while you are shopping. You can also order groceries using a MasterCard app.

LG had a fridge where you can knock on the glass to make it turn transparent so you can see inside without letting the cold air out. LG also showed off the LG Styler, which can steam and shake your shirts so that the wrinkles go away. Panasonic showed another version of its “magic mirror” from last year where you can see how you might look with a different hair style.

I’m not sure I’d pay extra for any of these features, but they make sense. Now if somebody could just combine all of these ideas into one product, that would be something. 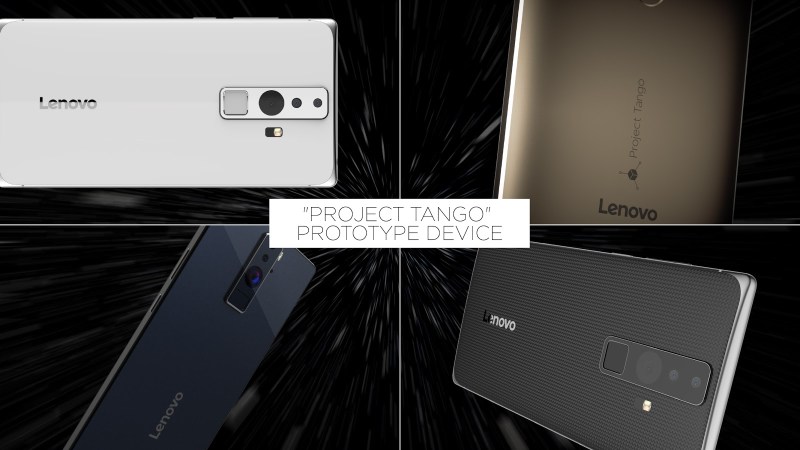 Above: A Lenovo smartphone model that uses Google’s Project Tango.

The smartphone industry has been skipping CES in favor of Mobile World Congress. But even with that change, I was surprised at how little new there was to see in smartphones at the big tech trade show. There are more multi-network or multi-SIM smartphones available, but that’s not exactly rocket science. Some of the new phones come with multifunction connectors to take advantage of USB Type-C for a faster data transfer rate of 10 gigabits a second.

Perhaps the biggest new twist we saw was the Lenovo smartphone that uses Google’s Project Tango, which uses multiple cameras and sensors to detect the environment around you. It builds a 3D image of the space and lets you measure objects or play games. Sadly, Lenovo merely announced a collaboration — it didn’t have a smartphone on display using Project Tango. Given what I saw, I was disappointed that the tech gadget that is most pervasive in our lives isn’t changing very much. It made me long for the days of pseudo innovations, such as curved screens and “phablets,” or hybrid phones and tablets.

Cars are getting smart, but not smart enough 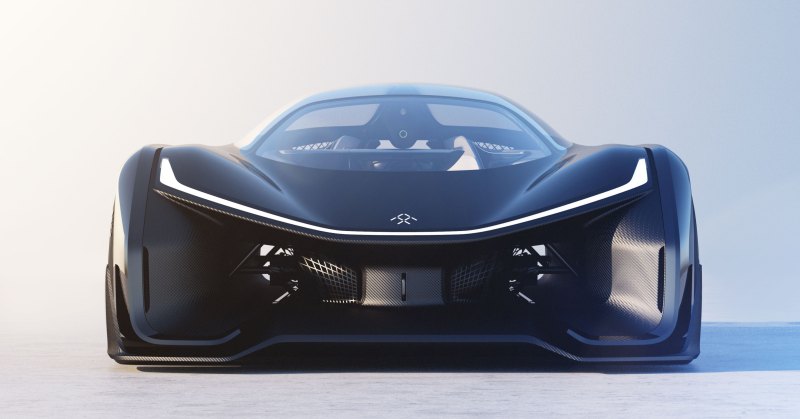 Car makers from Ford to General Motors showed up to tout electric vehicles, new ridesharing innovations, and driver assistance technologies. But the self-driving car is still pretty elusive. Ford said it was tripling the size of its self-driving car research fleet — but that only meant it was putting 30 test vehicles on the road instead of 10. Nvidia showed off its Nvidia Drive PX 2 supercomputer for the car, but it also spelled out all of the difficulties that a self-driving car must deal with. What happens, for instance, if a driver violates traffic laws and runs a red light? What happens if a kid kicks a ball in the street? What if someone with a left-turn signal turns right instead? There’s still a lot of human error to deal with, but no real way for a self-driving car to immediately turn over that car to the control of its human owner. The human, lulled by the autonomous technology, may very well be asleep or texting. At CES, we saw plenty of cool technology, like Faraday Future’s FFZERO1 electric sports car. But the toughest problem facing the car industry, and perhaps the tech industry, hasn’t been solved yet.