Simulators are getting serious 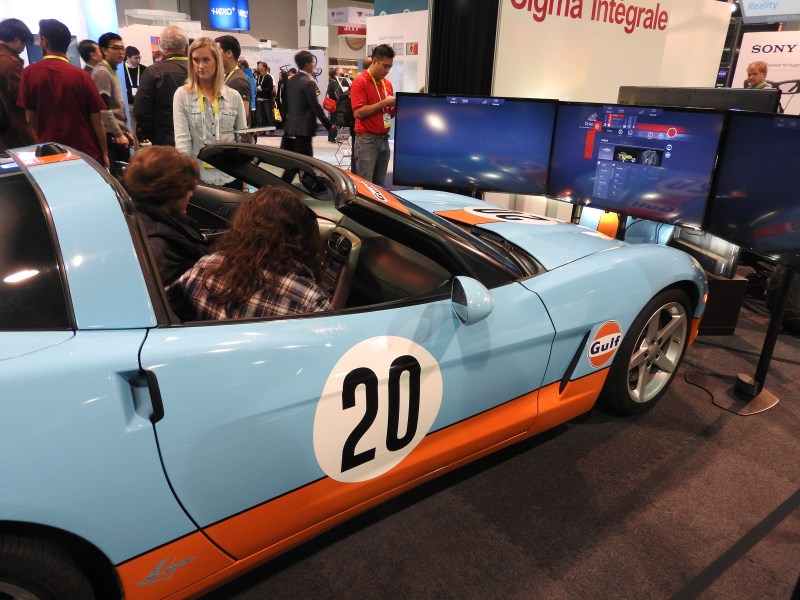 Virtual reality and augmented reality are about to introduce us to a wonderland of virtual worlds and simulations. But that means that the creators of real-life simulators have to up the ante. That’s what we saw with Sigma Intégrale’s new racing game product that includes an actual Corvette. Former VB research head John Koetsier gave it a whirl and thought it was great. You get a 180-degree view of the world as you drive while viewing three 50-inch LCD screens.

There were other simulators out there from car makers and video game companies. BMW’s Motorrad Heads-Up Display Simulator put you on top of a motorcycle to train you how to ride your bike. Krush also showed off its Moveo flight simulator, where you wear a VR helmet and view 360 degrees around you. The Moveo sits atop a giant mechanical arm. It lifts you off the ground and allows you to move in any direction, even upside down. These simulators aren’t for your home, but they give you a taste of what simulations could be like in the far future. More likely, they’ll be cool attractions at theme parks and location-based entertainment. 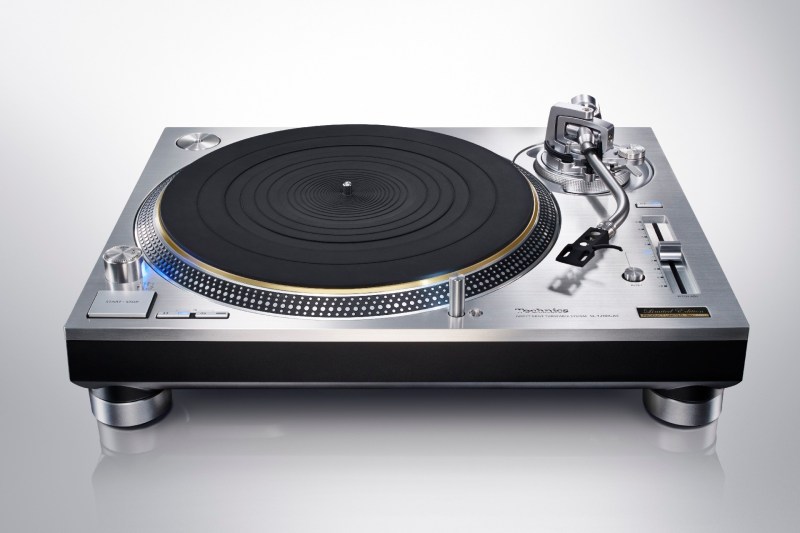 My kid loves playing with typewriters, old film cameras, and record players. She would fit right in at CES.

The retro trend is still going strong as tech-savvy baby boomers get older. Polaroid, Sony, and Panasonic all showed off vinyl record players at CES. Panasonic brought back the Technics brand in 2014, and it launched the classic-style SL-1200 record player. Sony also launched its PS-HX500 record player, which allows you to rip albums into Hi-Res Audio files. Polaroid’s turntable can also convert records into digital music. Crosley has also been selling its vinyl record players in Urban Outfitter stores. I’m not sure everybody is going to go out and invest in old record albums, but the trend was echoed in a lot of corners of the show, from nostalgic Stern pinball machines to the old VW Microbus of the 1960s.

Drones are getting more extreme 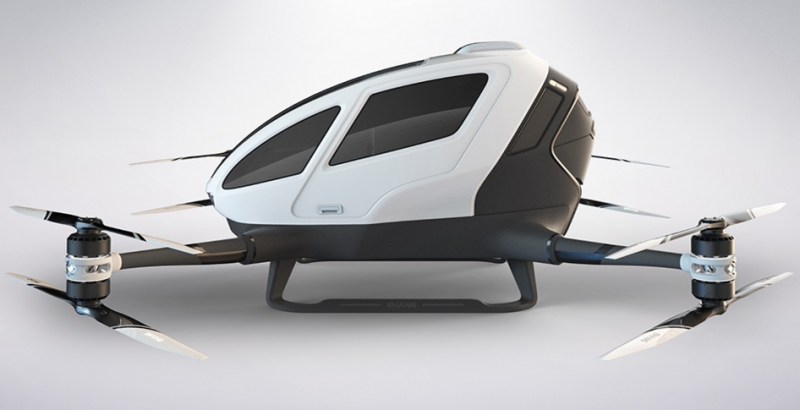 Above: EHang184 drone can carry a human passenger.

A year ago, it seemed like drones were getting to be old hat. But at CES, I saw drones that could find fish underwater. They had odd designs, like the flying wing look of the Parrot Disco, which can stay in the air for 45 minutes and fly at a speed of 50 miles per hour. And there was even one “manned drone,” the EHang184, from Chinese drone manufacturer EHang.

The EHang is a 5-feet-tall, 440-pound drone with gull-wing doors and a top speed of 62 miles per hour. Of course, other people would call a manned drone a helicopter. But EHang has a strange answer to that: You can fly it using a tablet, or a smartphone, but there’s no in-cockpit controls in case you want to take over manually. You have to trust in its batteries.

With this kind of innovation — or craziness — still in full gear, it’s not hard to believe the sales forecasts for drones. In 2016, 2.9 million drones are expected to be sold in the U.S., according to the Consumer Technology Association. Sales growth for 2017 is expected to be 53 percent.

4K TV has a growing ecosystem

Above: LG’s OLED TV was just 2.5 millimeters thick, or about the width of four stacked credit cards.

It’s hard to get excited about TVs, but that’s what a ton of real estate is dedicated to at CES. This year, the floor models included a 2.5-millimeter-thick organic light-emitting-diode (OLED) TV from LG. The 4K TV was finally dominant at the show, even if it still accounts for just 20 percent of overall TV sales. 4K TVs have about four times the number of pixels of 1080p, or high-definition TV.

Consumer electronics companies have now introduced a full ecosystem of gadgets around 4K, such as 4K Blu-ray players. To help boost sales, TV makers introduced UltraHD Premium, which includes a feature dubbed high dynamic range (HDR), for displaying high-contrast images with the blackest blacks. There’s also a small but growing amount of 4K  content on everything from YouTube to Netflix. Prices of 4K TVs dipped below $1,000 during the holiday selling season, and you can expect them to fall again during the next year.

Samsung tried to differentiate its TVs with “quantum dot” technology, which offers better colors. Samsung even assembled a 170-inch 4K TV from a bunch of smaller modular TVs. Of course, TV makers won’t want to keep us put at 4K: They’re already showing off 8K TVs, with 16 times the pixels of HDTV. LG showed off a 98-inch 8K TV. 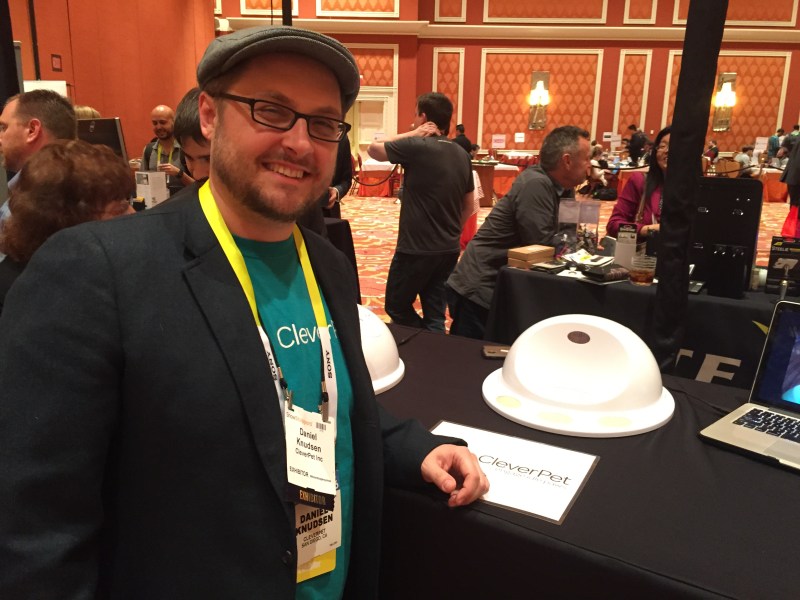 Above: Dan Knudsen is the cofounder of CleverPet, which makes a game console for dogs.

The attention-grabbers of CES were still the weirdest, not the most practical. This, in itself, is one of the enduring trends of CES. People make deliberately goofy products to stand out from the crowd. We saw everything from a wagging tail for humans to CleverPet’s video game console for dogs. The wacky list includes the funny Segway robot (which you get to move forward by squeezing its head between your legs), and a smart bra that was paraded across the stage during Intel’s keynote. (See more of this stuff in the post from Fletcher Babb.) Dan Knudsen, cofounder of CleverPet, told me, “The hard part for now is convincing people that a game console for dogs is not a ridiculous concept.”