CES isn’t only about refrigerators with 4K OLED displays built into the doors. It’s also about people.

While everyone was excited about virtual reality devices like Oculus Rift and HTC Vive, it’s easy to forget the industry has a number of humans responsible for creating and fueling that hype. That has led digital marketing company ScribbleLive to compile a list of the most influential people in video games during CES. These important people include Activision executives that made news in esports as well as people who are bringing us the first pieces of VR hardware and software. And this data shows the importance of having a strong, charismatic leader to handle consumer-facing messaging. 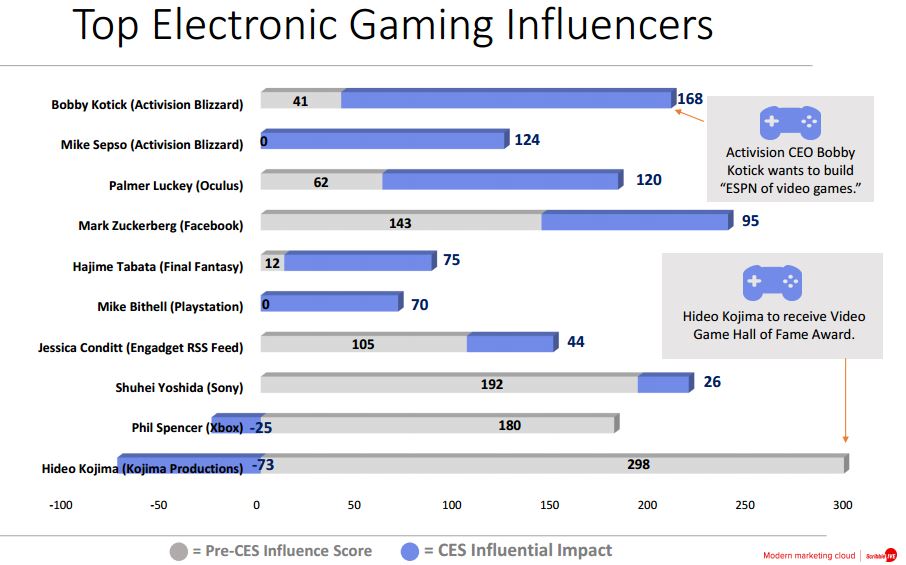 Activision seemingly made the biggest impact when chief executive Bobby Kotick and esports boss Mike Sepso announced that the acquisition of Major League Gaming. Following up those two were important virtual reality personalities, like Facebook chief executive and Oculus VR owner Mark Zuckerberg, as well as Oculus VR founder Palmer Luckey. Oculus was in the news a lot after announcing the $599 price for Oculus Rift, and Luckey took point on a lot of the messaging surrounding this.

But the realm of VR influencers expands beyond Oculus. PlayStation VR helped Sony Worldwide Studios boss Shuhei Yoshida get into some headlines as well as developer Mike Bithell (Thomas Was Alone), who is working on games for that device.

Finally, Xbox boss Phil Spencer and Metal Gear creator Hideo Kojima round out the bottom of the list alongside Jessica Conditt, a reporter at Engadget.

ScribbleLive explains that it came up with this list by analyzing “over 100 million articles from news, blogs, and social media sources.” The company then uses an algorithm to attribute an “attention score” to each mentioned person.

Of course, ScribbleLive didn’t focus only on gaming executives and developers. The firm tracked all tech fields and found that Palmer Luckey was the most influential when you take all of CES into account.

The company did the same for gaming brands. This helps illustrate how big-name leaders can help get people talking about their brands as well: 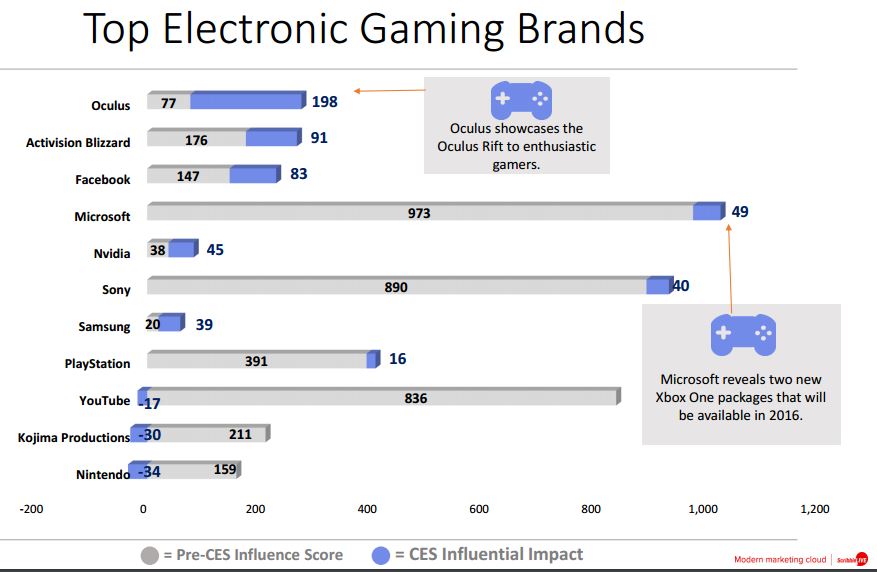 Unsurprisingly, Oculus was the big winner here, but Activision was able to grab some attention as well by revealing the breadth of its esports strategy.

This is a strong start to 2016 for these companies as they aim to take their momentum into product launches and other, more gaming-focused trade shows like June’s Electronic Entertainment Expo in Los Angeles.