We’re still very much in the early stages of the self-driving car revolution, and early results are generally positive. But a new report submitted by Google to the California Department of Motor Vehicles reveals some interesting insights into potential outcomes if the cars weren’t required to have human drivers on standby.

The disengagement report covers a number of automobile companies, and records instances where autonomous driving mode is deactivated for various reasons, either due to mechanical fault or a perceived danger.

Google revealed that between September 2014 and November 2015, there would likely have been 13 crashes had a Google driver not intervened, according to its post-incident analysis.

“Of the 69 reportable safe operation events, 13 ‘were simulated contacts’ — events in which, upon replaying the event in our simulator, we determined we determined that the test driver prevented our vehicle from making contact with another object,” the company wrote in its report. 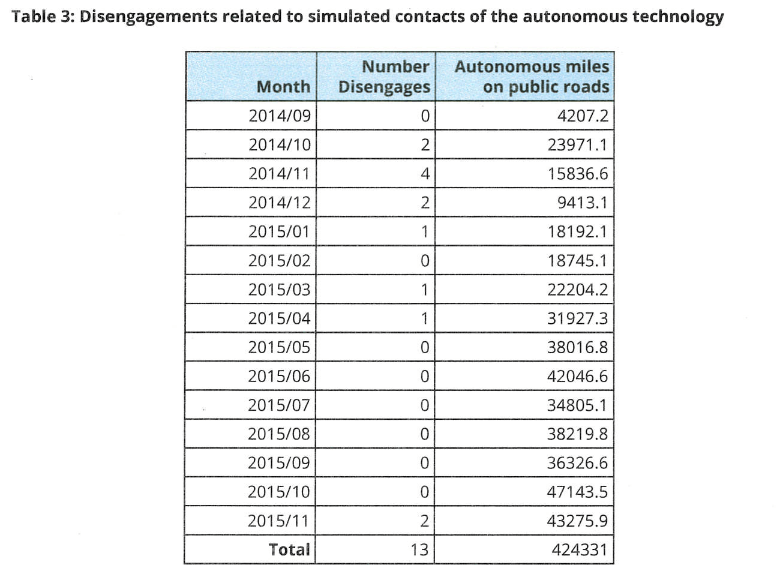 Above: Disengagements to avoid crashes

Google added that 10 of the 13 events would have been caused by an action from the Google car itself, while the other three would have been due to other drivers on the road. It’s also worth noting that Google doesn’t really break the incidents down into severity, though it does mention that two incidents involved potential contact with traffic cones.

Up until November 2015, Google said its autonomous cars had traversed more than 1.3 million miles, around a third of which had taken place on open roads within California.

There’s little question that autonomous cars will be commonplace in the future, with the likes of Lyft, Uber, Apple, and Google all throwing their resources into various projects. The ultimate goal at Google and elsewhere is to build cars without any kind of manual control functionality built in. But until disengagement numbers are driven down to zero, there will always be a resistance to handing full control over to the machines.