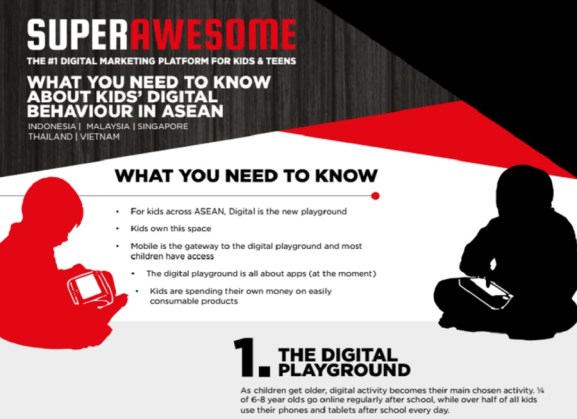 U.K.-based startup SuperAwesome found in a survey that children ages six to 14 in Southeast Asia are 20 percent more active in mobile usage than U.S. kids.

The report examined markets such as Indonesia, Malaysia, Singapore, Thailand, and Vietnam. The finding is interesting because, despite the big impact these kids have on family purchase decisions, there is very little detailed analysis for the age group, according to SuperAwesome. The results showed that, in terms of mobile, the children in these markets are among the most digitally engaged on the planet.

The study found that 87 percent of kids in the region use smartphones, with half owning their devices. By comparison, U.S. kids in the same age group own less than 30 percent of their phones. U.S. kids, however, own more tablets, at 47 percent.

For Asian kids, the mobile device is the core way to consume media. Smartphone usage is rapidly catching up to TV viewing in the market, and mobile gaming is the third most-popular activity for kids in their spare time, only slightly behind TV viewing. Of kids who watch TV regularly, a quarter use a smartphone at the same time.

SuperAwesome CEO Dylan Collins said in a statement, “The under-13 audience is one of the most influential in the world, yet there is very little direct data on their digital media behavior. As we have done in the U.S. and U.K., we’re pleased to bring one of the first comprehensive studies of what kids’ digital behavior actually looks like across the [Southeast Asia] region. This has been at the top of almost every agency and brand wish-list for some time, and it will make for fascinating reading.”

SuperAwesome interviewed 1,800 kids in the region for the report.

London-based SuperAwesome has created a digital advertising platform that the company says can safely target children without running afoul of privacy regulations. The digital ad market for kids represents a big opportunity, with industry estimates saying the market could grow to $2 billion by 2018.

“That being said, there is no official measurement of the digital ad market for kids, and it is one of the more difficult markets to leverage thanks to the high level of regulation – an area SuperAwesome knows well,” said Stewart Rogers, analyst at VB Insight. “Advertisers will need to be cognizant of various restrictions, including those applied by the FTC, IAB, and other worldwide bodies.”