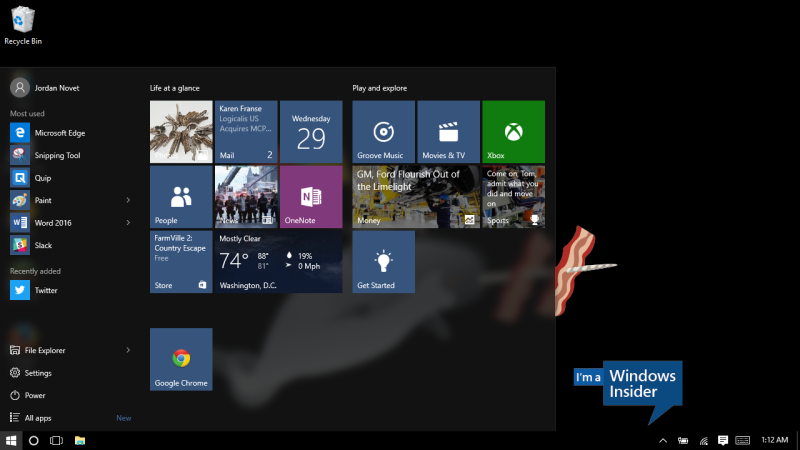 Above: The Start menu on Windows 10.

Question: You used the phrase “existence proof.” Are you talking about proof of viability, of longevity?

Su: Everybody wants to see, in that price point, does the product sell? The PC market segmentation is always good, better, best. What sells at that price point? You’ll see that the OEMs are moving AMD up the stack. Where AMD used to only be in the very low price point machines, we are moving up the stack. We’ve proven, with our A8s and our A10s, that we can compete. Certainly with our commercial business, we can compete.

HP is willing to launch its new Windows 10 commercial system exclusive with AMD. We’ve also been, not just on the consumer aspect of being able to get an SSD type system that you guys would want to use, but also the enterprise accounts that we’re winning are significant. We’re talking about accounts like Brinks, like Dr. Pepper Snapple Group, all these Fortune 500 and Fortune 1000 companies. Never before, in all the years you’ve been covering AMD, were they rolling out thousands of AMD-based notebooks. That’s where we are today.

We have a nice position the team’s achieved where we’re number one in thin client. Now we’ve got real momentum in enterprise-class notebook designs. That’s a big one for us to build on going into seventh-generation APUs and Zen-based APUs after that. Success there allows us to build that into the consumer side as well — SSDs, beautiful displays, and all the rest.

Question: In terms of form factors, we’re seeing a resurgence in desktops as people move forward. There was a push away from desktops and into laptops. Have you seen that as well, that desktops are having a bit of a resurgence?

Su: I do think so. There’s an attraction to interesting desktop form factors. They’re not all big towers. Some of them are now much smaller, sleeker boxes. The all-in-one category as well, as far as what can be offered there.

Question: Can you comment at all on what you’ve seen as far as Windows 10’s effect on the PC market?

Su: More generally, we’d all say that Windows 10 is a great product. Microsoft did a good job with it. As far as a transformational thing in the PC market, I don’t think we’ve seen that. We believe it’s a steady refresh cycle that will come with Windows 10.

VB: So it’s not necessarily affecting hardware sales at this point?

Su: It’s not inflecting hardware sales up, if that’s what you’re asking.

Question: Is there anything else you think is affecting PC market demand right now?

Su: We have some macro effects in the PC market. China is weaker, obviously. The markets have been pretty rough. With Europe there’s still some instability with the exchange rates. Those things do affect the PC market overall.

There’s a general view that there are a lot of older PCs that do need to be replaced. It’s about finding the new and interesting machines that will unlock that. I am a believer that the PC market has a lot of room for innovation, still. As the top guys — HP, Lenovo, Dell — look at innovation within their systems, and certainly Microsoft with Surface and Surface Pro, that’s what brings customers to the PC market.

Question: Is there some delay in that refresh because people are spending money on other new things — wearables, drones, robots?

Su: I don’t necessarily get that. I don’t know what other people say. You saw some cannibalization by tablets and smartphones at a point. That’s leveled off. Now it’s about, OK, good cycle, you have Windows 10 out there. You have a potential commercial refresh coming up with Windows 10. You have new two-in-ones. You have much sleeker form factors coming out. That stabilizes the market a bit. 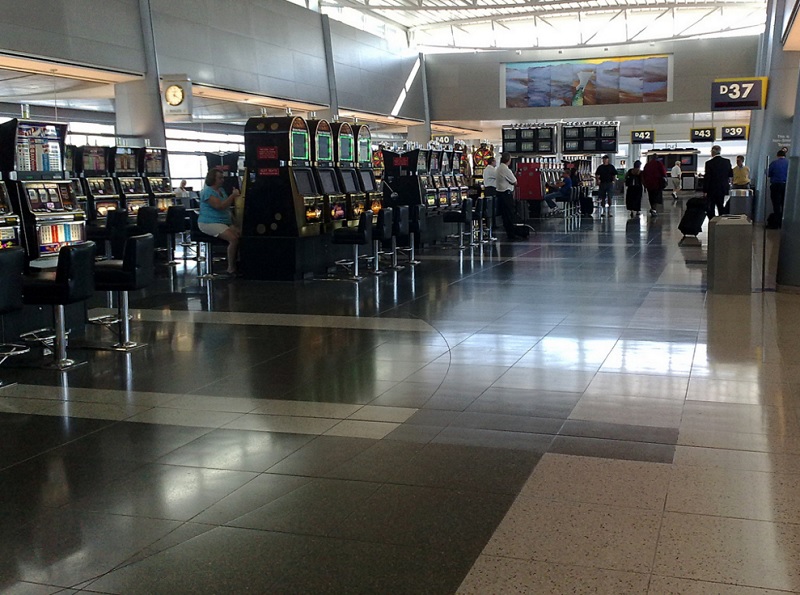 Above: Slot machines in Las Vegas.

Question: There’s so little that’s genuinely blow-your-mind exciting in the tech market right now. We had a period of lots of major shifts that were really exciting, but everything’s steadying down now. We’ve gotten so used to these big “wow” moments. Another one of those would be great. We saw that briefly with the Nano and some of the PC designs around it.

Su: I think what you’re saying, if I can rephrase it to how I would think about it, is bringing the technology to life. The fact is, the technology is phenomenal. Really. I sit around and look at this stuff and it’s unbelievable what we can do. Now how do you translate that into something you can take a picture of, or have a soundbite that ends up becoming —

Question: I feel like it’s less your job to blow us away than your customers, though. I’d like to see AMD maybe fully exploit how it’s different with semi-custom.

Su: I do believe that the customer innovation we can enable, or that we do enable, is underappreciated. There’s something to be said there.

Question: Semi-custom right now is enabling game consoles. It’s not enabling some new kind of thing. Here in the middle of Vegas, aren’t you trying to get into the slot machine business?

Su: Yeah, actually. We have a number of them. As I was walking through some of the casinos, I thought, “I wonder if that has our chips in it?” It did cross my mind. Maybe we’ll put an AMD banner on those machines.