The hoverboard market has been a mess, with litigation over the invention of the devices and videos of knock-offs catching on fire going viral.

Razor is one of the big companies that hopes to bring some sanity to the emerging market for the new kind of motorized, self-balancing, two-wheeled scooters that let people traverse sidewalks in a speedy way. But there may litigation for some time to come, as Razor itself is getting sued too. We’re sorting out the market as much as we can, as we saw a bunch of hoverboards at the 2016 International CES, the big tech trade show in Las Vegas last week.

Hundreds of knock-offs hit the market in the last year, but some of them were pulled off the market after bursting into flames. Viral videos of burning hoverboards have likely hurt demand for the boards.

Bob Hadley, director of research and development at Razor, said in an interview with VentureBeat that the maker of scooters signed a licensing agreement with Shane Chen, the inventor of the hoverboards, back in October. Chen’s design had gyro sensors built into them, which allow riders to glide forward, backward, around corners, or in a spin based on a shift in their feet. 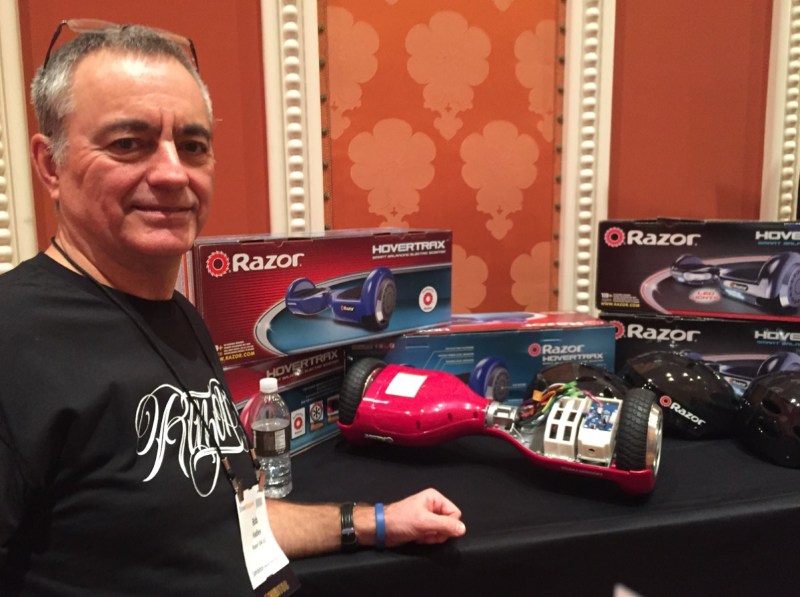 Razor managed to get its boards out just before the holidays. The company’s Hovertrax models sell for $600 and $700, with rechargeable lithium ion batteries.

“Our introductory models are the same as what has been out on the market,” Hadley said. “We cleaned up the details, with quality components and Samsung batteries.”

Chen is in litigation with IO Hawk, another company that started marketing a hoverboard a year ago. Chen and his startup Inventist launched a Kickstarter project to get the Hovertrax hoverboard to the market. He teamed up briefly with billionaire Mark Cuban in litigation against IO Hawk, but Cuban has since gone his own way.

Razor itself faces a lawsuit from Segway, which introduced its Segway Robot at CES 2016. Back in September, Segway and its parent company Ninebot, along with research firm DEKA, sued Inventist, saying that the Hovertrax (which doesn’t actually hover above the ground) violated DEKA’s patents. Segway added Razor as a defendant during CES.

Segway showed off its Segway Robot hoverboard-like device during the opening keynote at CES. Brian Krzanich, CEO of Intel, rode one out onto stage. The device has a self-balancing board, as well as a half-height post with a robot head. You steered the device by squeezing the robot’s heads with your legs. That device was very different from other kinds of hoverboards, which lack the big post in the middle.

The Segway design might be easier to control. I tried out the IO Hawk hoverboard a year ago and it was very tricky. They’re not easy to learn, and I saw one guy fall flat on his back because he couldn’t balance. The models in the videos below, Kailey Maurer and Kellianne Stankus, are clearly well trained to balance in acrobatic ways. You have to pay attention when you ride a hoverboard.

Fletcher Babb, one of our VentureBeat writers at CES, saw one hoverboard vendor selling a product for just $90. Bloomberg also witnessed U.S. marshals raiding a hoverboard booth at CES for allegedly infringing a patent for OneWheel, a single-wheeled board product.

As for the knockoffs, Hadley said, “They use some battery made in some guy’s backyard. There’s no inherent technical issue. It’s just using good quality components and assembling it in a way in which the wires don’t chafe. If you get cheaper and cheaper, they leave components out.”

And where is the market going?

“If I could predict where the market is going, I’d be at the gambling tables,” Hadley said. “We own the patent rights. We are in the process of trying to get the knock-offs off the market. We are trying to work with legitimate competitors through a licensing agreement or something else. I don’t really know. A year from now, we hope the major player.”