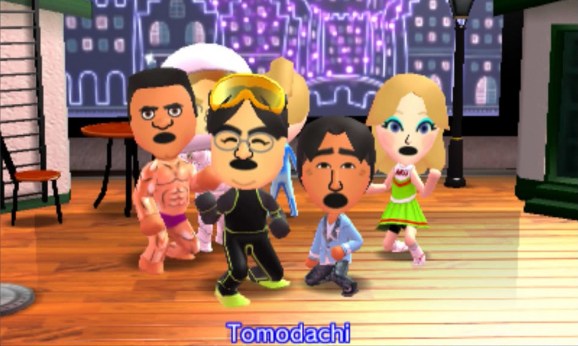 Tomodachi Life puts your characters into dozens of strange situations. And it could help put cash in Nintendo's pocket.

We’re a matter of weeks away from seeing Nintendo software on non-Nintendo devices.

The publisher’s first smartphone game is coming in March, Nintendo president Tatsumi Kimishima wrote in an editorial for Japanese newspaper Mainichi Shimbun (via industry analyst Serkan Toto). Kimishima wrote this piece to detail his plans for the company over the next 12 months. The president explained that he wants to generate $855 million in profit in “several years” — which means that he is trying to steadily build the company to a point where it is generating four times the profits it did last year. And the app for Android and iOS smart devices is a big part of that. That’s especially true when you look at how Japan is one of the top three markets when it comes to spending on the $30 billion mobile-gaming market. And while most of that Japanese revenue goes to the duopoly of Monster Strike and Puzzle & Dragons, Nintendo could have the clout to grab some of that money.

4) He says it’s vital for Nintendo to experiment with new business models. He confirms the first smartphone app will be rolled out in March.

In October, Kimishima and Nintendo detailed that first mobile game for investors. It’s Miitomo, and it’s a social toy that is similar to the company’s Tomodachi Life release for 3DS. In this app, players build their Miis, a cartoon avatar that Nintendo has used since the Wii, and connect with friends. Those Miis will then go on to perform actions and develop personalities on their own. This could lead to moments where your Mii goes to say hi to a friend for you without you controlling it.

Nintendo specifically said that it wants to design Miitomo for people who do not like talking about themselves. And while that might seem like a small market in the age of Instagram and Snapchat, Nintendo has a history of developing fun gameplay around strange understandings of social interaction — that includes the Animal Crossing games as well as Tomodachi. From the earliest entry in the Animal Crossing series, which are games that have players leading mundane lives performing chores and trying to pay off their mortgage in a village full of wild beasts, Nintendo has referred to these games as “community simulators.” That’s not only truer because of how you need to interact with the computer-controlled players to keep them happy or liking you, but also because you could correspond with and trade with your friends living in the same or different towns.

But while Miitomo may serve as another fascinating social tool, Nintendo could clearly also position it as a money-making hit. If the company finds a way to get people excited about spending real money on cosmetic items, people could get into the habit of spending a lot to make sure their Mii always looks fashionable before going to visit someone else.

If that’s the route Nintendo takes, it could find itself on the road back to $855 million in profits before it realizes it.