It’s easy to mistake Tom Clancy’s The Division as a multiplayer-only game. Most of the previously released trailers just show people grouping together. However, developer Ubisoft Massive says solo players have nothing to worry about.

You can play through The Division (out March 8 for PlayStation 4, Xbox One, and PC) by yourself. But it was the team-based cooperative gameplay that was shown off at a recent hands-on demonstration in Los Angeles. During that event, creative director Magnus Jensen assured journalists that the open world shooter “is an excellent single-player game, should you choose to play it that way.”

It’s hard to trust Jensen’s words. After all, it wasn’t that long ago when another developer (Bungie) said something similar about its open world shooter (Destiny). Destiny shares a lot with The Division in terms of their non-linear structures and multiplayer focus. But when Destiny came out in 2014, we quickly learned it was almost nothing like what the studio promised. 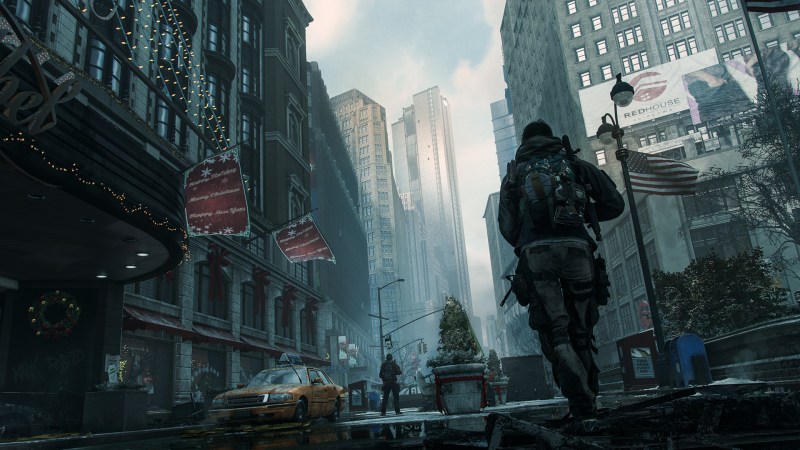 Above: Tom Clancy’s The Division is one of the big 2016 games.

Of course, Bungie and Ubisoft Massive are different developers operating in different situations. But after the huge disappointment of Destiny, The Division’s single-player component was just something I couldn’t ignore. So when I interviewed associate creative director Julian Gerighty, I asked him how it will differ from teaming up with other people online.

“It’s very different. I’m more of a single-player kind of guy, too, so the [role-playing game] systems, the storytelling, the flow, the structure of the game has to make sense,” said Gerighty. “But what I found is that when I’m playing with other people, what we can do is specialize [our skills] much more. … Whereas if you’re playing by yourself, you’re going to have to switch up those roles. They’re both great experiences. They’re just very different.”

So how different is it? I didn’t get much alone time at the preview event, but based on what I’ve seen and what the developers told me, here’s a basic idea of what to expect. 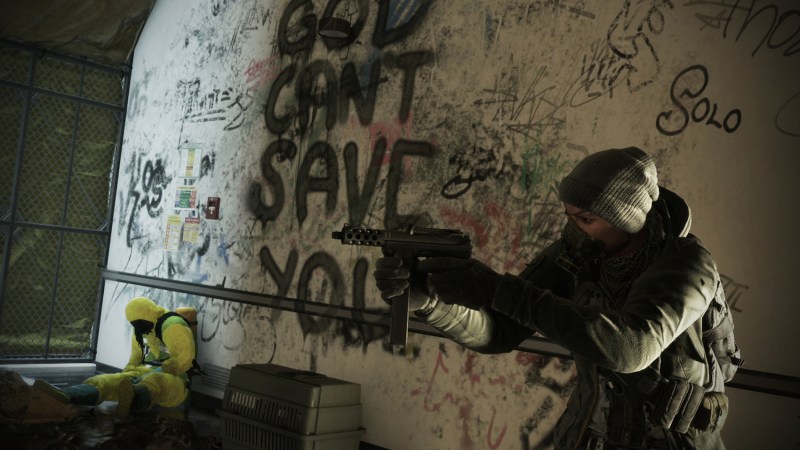 Above: Just another typical day in New York.

In The Division, you play as a sleeper agent who has to help New York City get back on its feet after a fatal virus killed a large chunk of the population and crippled the city’s infrastructure. Dangerous gangs and other enemy factions formed in the aftermath, stealing the few supplies that are left and terrorizing any survivors.

When you’re playing with others, the situation doesn’t seem so bad. As Gerighty said, each person can play a different role, like a long-range sniper or a close-quarters attacker. When you’re by yourself, you’re a one-man army. You have to make sure you have the right equipment and skills (like deploying turrets that spew flames) for the different foes you’ll face.

The difficulty changes based on whether you’re playing with others or not. So the dozens of bad guys my three-man team fought against in Madison Square Garden — a tough fight where we almost died — isn’t representative of what a solo player might see in the same area.

But the story is the same no matter how you play. Your agent (who you can customize with different faces, scars, hair styles, and more) is silent the entire time. Other characters you meet handle all the talking instead, and collectible pieces of intel scattered around the city reveal more about the collapse of NYC. Above: These data-mined memory fragments also help tell the story.

Ubisoft Massive split the story into three main narrative threads: medical, tech, and security. They’re also the names of the three different departments you can upgrade at your base of operations (which Jensen said is almost like your “second character” in the game). Once you secure this vital location in Manhattan, you’ll go on specific missions for each wing to earn resources that’ll help you upgrade them. In doing so, you unlock more skills for your character to use. Over time, the rundown former post office will look cleaner, attract more people, and even get Christmas decorations.

Each of the threads covers a different topic. The security storyline, for example, starts out with rescuing Captain Ray Benitez, a former cop. After that, you can do missions for Benitez that’ll help you understand the enemies in the world. Playing medical missions will uncover more details about the mysterious plague that spread across the city. And the tech department will help you figure out what happened to a missing group of Division agents.

“One of the big challenges we had in development was to create a compelling story that could be told in a completely non-linear open world. So one of the choices we made there was every mission you do gives you a piece of the narrative puzzle,” said Gerighty. “Doing all of those missions — putting those puzzle pieces together — you get a payload at the end that will tell you the whole story in that thread. 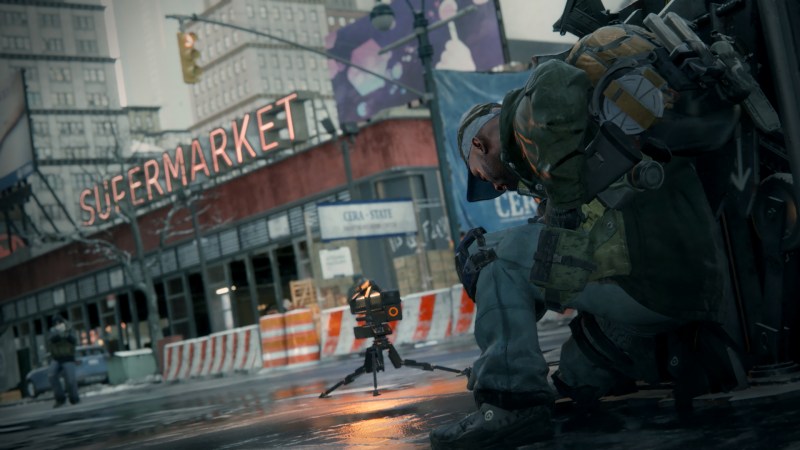 Above: The turrets may be small, but they’re invaluable in a crowded fight.

If done right, I can see The Division being a much scarier experience if I’m playing it by myself. The missions my team went through were fun, but it was hard to pay attention to the story because we were constantly chatting and figuring out where to go next. The idea of a lone agent going into this dangerous city without having that kind of backup sounds really cool.

For more on The Division, you can read about the cooperative multiplayer experience here.