When Frank Azor, the cofounder of Dell’s Alienware gamer PC division and the general manager of XPS, saw a demo of Oculus VR’s virtual reality headset for the first time, his first question was, “How can we help?” That was awhile ago, and at the recent 2016 International Consumer Electronics Show, the big tech trade show in Las Vegas, Alienware showed how it would help.

During CES, Palmer Luckey, the founder of Oculus, had to apologize for saying that the newly announced price for the Rift, which goes on sale formally on March 28, was “cheap” — even though, at $600, it costs more than Oculus originally expected.

Dell, meanwhile, said that it would price its VR-ready Alienware machines at $1,000, or about $100 or $200 below the usual price of its gamer PCs. Alienware also made it easy to order an Oculus-ready PC from its website. VR on the PC isn’t going to be cheap, and a very small percentage of PC owners will be able to run VR on their machines. But over time, Luckey and Azor are confident that VR will reach the masses.

Azor and Luckey teamed up at a Dell event at CES to talk about the alliance between the PC maker and the headset maker. Azor said that Luckey’s single-handed effort to revive virtual reality for the modern age reminded him of cofounding Alienware two decades earlier. They talked about the push and pull between hardware and software and how the dawn of a new gaming and entertainment system could drive demand for the entire hardware industry.

Here’s an edited transcript of their geek lover’s conversation.

Azor: Can you give us a recap of all the big announcements you guys have made this week?

Luckey: We announced that we’re finally taking pre-orders for the consumer version of the Rift. We shipped DK1 and DK2, our development kits, before that. We’ll be shipping more than 20 Oculus Studios titles and many more third-party titles in 2016. We announced that we’re going to be bundling Lucky’s Tale with every sale of the Rift, and EVE: Valkyrie with every pre-order.

Azor: It reminds me of where we were 20 years ago. We were in a similar place as far as some of the challenges and opportunities we see today in VR. If you can remember the world back then, some folks were playing PC games in 16-bit and 32-bit architectures. You had Windows. You had DOS. You had to do a lot of work to get some of this stuff to run. There was an unfair balance of trying to get a game to work versus actually playing it. That was the genesis of how we started Alienware. Our goal has been to keep people focused on their games. Don’t worry about supporting the tech. If you want the turnkey system, we’ll provide it to you and support it for you.

I feel like VR, in a lot of ways, is in need of that same opportunity. You guys have produced an amazing product. The experience is phenomenal. But there’s a decent amount of hardware requirements coming with it. How are you finding that folks who are pre-ordering the system—Are they equipped for the system performance that’s necessary to run the experience?

Luckey: The short answer is that they are not. But the longer answer is that we’ve been telling people you need a high-end PC to run VR for a long time. Earlier last year, we really started pushing this message, that virtual reality was going to be at least a $1500 all-in investment, for the PC and the Rift. A lot of people don’t have PCs like that. PC gamers do, people who build their own PCs or buy high-end PCs, people who play games that use high-end GPUs. But the majority of people out there do not have high-end PCs. That’s the reality. A lot of them have never owned one. A lot of people buying the Rift, I don’t know if they’ve ever had a reason to own a gaming PC. They might not even be buying the Rift for gaming, but that doesn’t change the fact that you need a high-end graphics card.

Azor: It’s more than just the graphics card. It’s the memory, the CPU, the way it fits together in general. You can’t have 15 apps running at once. It compromises the experience.

Luckey: VR is one of the least tolerant applications on the PC as far as applications running in the background. Rather than just losing a couple of frames once in a while, your entire view of the world will jerk and shake in a way that can make people really uncomfortable, even people like me who’ve adapted to anything. It’s very annoying. 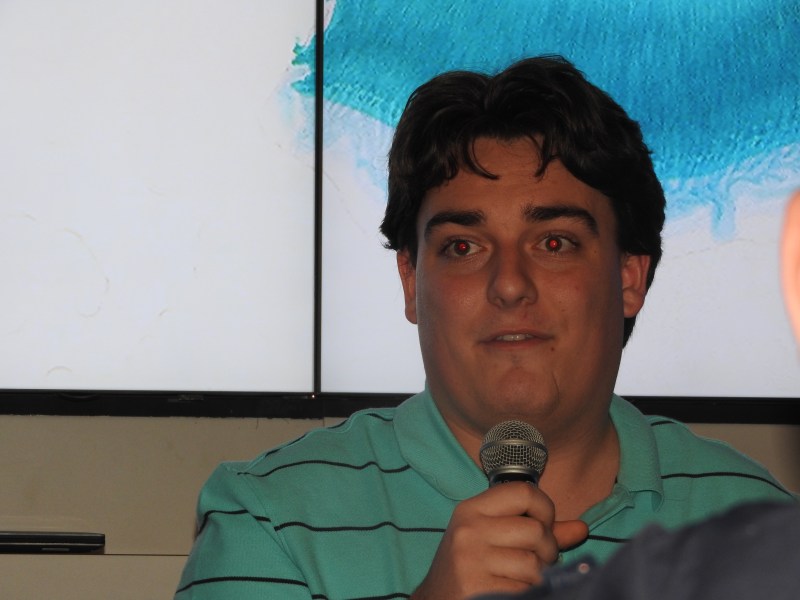 Azor: Why is the performance requirement so high?

Luckey: It boils down to resolution and frame rate, and the fact that you’re rendering multiple views. You’re not rendering one 2D view. You’re rendering two very wide field of view, very high resolution, very high framerate images. Even the most basic scenes in virtual reality can bring a system to its knees compared to relatively rich graphics that can run at 30 frames per second in 2D.

Unlike film or games or any other medium, there’s not a lot of tolerance for low frame rate or latency in the rendering pipeline. Every bit of the rendering pipeline has to be working properly, or the entire illusion falls apart. It doesn’t slightly degrade the experience. When it breaks, it breaks in a very bad way.

Azor: We’ve been working together for several years now, Oculus and Alienware and Dell. We share a common vision around driving the VR revolution. I remember meeting with Brendan Iribe a few years ago, when you were still a Kickstarter.

Luckey: It wasn’t just you. Multiple people within Dell and Alienware reached out to us, all in their own channels.

Azor: I remember talking to Brendan in this tiny little room down a hallway in E3. He put DK1 in front of me and I said, “That’s it. What do we need to do? How do we work together?” Ever since then we’ve been working on how we can make this vision come true. We want to put VR in as many homes and in front of as many people as possible.

I’m proud to announce today that we’re investing with Oculus in making this possible. Oculus has come to the market and said it’s going to be a bit more than $1500 to get this experience. The truth is, today it’s a lot more than that. It’s a few hundred dollars more. But we want to make that vision a reality. We’ll be taking our XPS 8900 and our X51 systems that meet the Oculus VR specification and are in the Oculus certified program, and we’ll invest in those platforms so that consumers can get them at a price point of about $1600.

Those machines typically run $1200 alone. Then you have to invest in the headset as well. You’ll be able to get one of those systems, starting today, bundled with a Rift headset, for $999 plus the headset.

We have believed in this vision of VR for a very long time now, all the way back to Michael Dell, who flew over to your offices and you met with him. I remember he sent me a note when he was done with the demo. “This thing is amazing. We have to work with these guys.”

Luckey: Both Dell and Alienware have often worked in new markets and places where they can make unique stuff in the computing space. Both of you have a pretty solid credibility in the gaming market. The products I’ve bought – an Inspiron 5200, a Latitude D420, an Alienware M11X – I have experience with high quality machines. They’re robust. They survived me being a teenager.

Azor: You’re not the typical PC user, I would imagine.

Luckey: I’m not. I was bringing them to school, and then I was just trashing them when I was working, especially the D420. But Dell has a good reputation. Alienware has a good reputation, among gamers and the general consumer market. Every step of the way that we’ve been working with these guys has been awesome. They’re committed to the future of this as much as we are. They know that virtual reality is the future of computing in many ways. They want to help us make sure we get this to as many people as possible.