The private SpaceX Falcon 9 rocket was supposed to return to a drone platform in the Pacific Ocean after launching the Jason-3 ocean monitoring satellite into orbit. The Jason-3 satellite weights 1,124 pounds and is about 3.3-feet on each side. The rocket took off from Vandenberg Air Force Base in California, using Space Launch Complex 4E, the launch pad that was used for Atlas rocket launches from 1962 to 2005. (SpaceX took over that pad starting in 2011.)

The launch, which was SpaceX’s second from Vandenberg, was shrouded in a deep fog. It went off without a hitch, however, and the first stage booster was expected to return to the drone platform. Touchdown was expected to take place within minutes of the launch.

The livestream recorded the takeoff fine, but the video cut out as the team was awaiting the return of the first stage to the launch pad. SpaceX ended up tweeting that the landing had failed:

Although the vehicle made it to the ship, one of its landing legs broke. This is the third time the company has failed to land its rocket on the floating ship. The satellite was successfully deployed into low-earth orbit, but it’s not clear how much damage the rocket booster sustained.

SpaceX, based in Hawthorne, California, was founded in 2002 by Tesla Motors CEO Elon Musk. The goal was to develop the technology to reuse rocks, thereby reducing the cost of sending them into space and (eventually) enabling the colonization of Mars. The company developed both the Falcon 1 and Falcon 9 launch vehicles specifically to be reusable. The company launched its first Falcon 1 into orbit in 2008. On December 21, 2015, it managed to successfully return a first-stage booster back to the ground at Cape Canaveral. 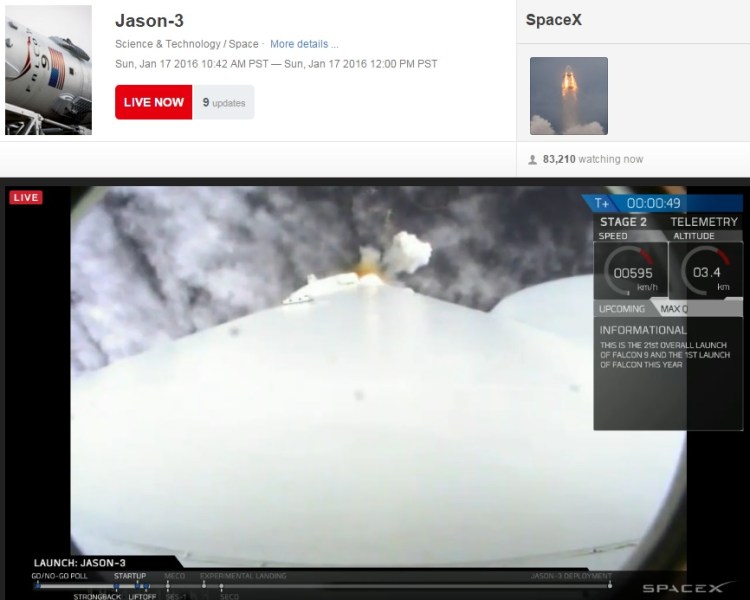 Above: View from SpaceX rocket as it heads into space.