The rental car companies pissed off the wrong guy. Luke Schneider and his friends had a bad experience renting a car for a golf weekend. So Schneider started Silvercar, a next-generation car rental company that takes the hassle out of renting a car at the airport.

Last week, at the 2016 International CES, the big tech trade show in Las Vegas, Silvercar announced that it had turned on its concierge-like service for renting cars in Sin City. It also announced that it had raised another $28 million from car manufacturer Audi to expand into other cities.

Las Vegas is the 12th market that Silvercar has moved into. Austin, Texas-based Silvercar uses valet-style greeters to meet you at the airport with your car. You no longer have to take a shuttle and wait in a long line at a car rental desk. You simply drive the greeter to a nearby location, and then you’re on your way. The company offers just one kind of fully loaded car: a silver Audi A4s.

Silvercar said it saw its business triple in 2015, an has opened in three new cities in the past six months. Started in 2012, it now has 150 employees and has raised a total of $60 million.

I took a ride with Schneider in one of his silver Audis while I was at CES. Here’s an edited transcript of our conversation. 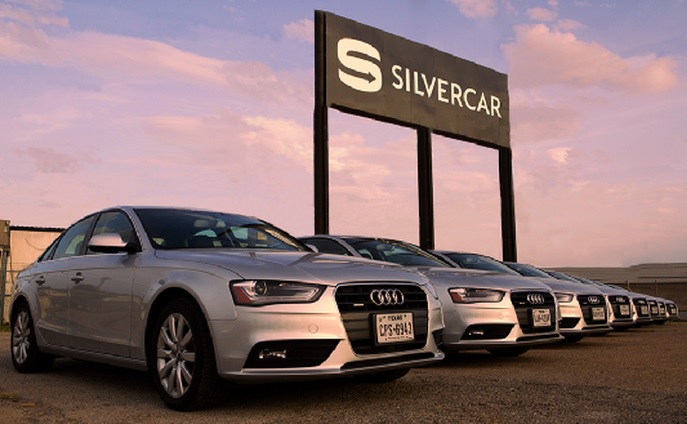 Above: Silvercar is a new kind of rental car company.

Luke Schneider: The whole experience is app-based. That’s what the iOS app looks like, as well as Android. Soon we’ll have the mobile web one, too. You do it all on your phone. You pick the location that you want, make a reservation, and when you’re done, it pops up with what to do upon your arrival. You scan a QR code in the car, and the next-generation hardware — which is beginning to launch now — uses Bluetooth low-energy between the phone and the car to validate your reservation and unlock it. You jump in and go.

The technology makes the whole thing seamless. Your phone pairs with the car, so you can use hands-free audio and things like that. When you bring the car back, the car calls us, essentially: “I’m back. Here’s how much fuel is left. Here’s where I am.” The customer is charged for the fuel they use, plus a flat five-dollar service fee.

VB: I used to go to the Black Hat conferences, and every year there’s a talk on how to hack Bluetooth. I wonder how you get around that.

Schneider: We’re about to call for a patent on it. It’s essentially AES encryption, the same that’s used in Wi-Fi, 128-bit, but it’s keys that you download when you make your reservation, shortly before it starts. Then they expire if you don’t use them. The only way someone could hack it is if they were somehow able to acquire both the private key and the public key and come through our backend servers to get through the car. If that happened, obviously we’d know about it long before anyone got in the car.

Bluetooth is a funny thing. It’s come a long way. iOS’s stack has gotten a lot better. iOS and Bluetooth are a component of a bigger system — hardware that mounts in the car, a cloud server that’s accessed by a GSM, and the mobile technology that customers use. We have a toolkit our own concierges use.

VB: Do you always use the phone, or is there something on the dashboard as well?

Schneider: We tap into the control network of the car, which is in the trunk here. We plug straight into it — takes about four minutes to light a car up on the grid.

The whole reason behind Audi taking a lead in this round…When you combine the web, wireless, and mobile pieces, you create a platform. That platform is extensible. The use case that it works with here is for airport car rental, but as people consume personal transportation more and more like they consume any other category, having that platform distributed throughout vehicles so that people can use them on demand becomes more important. This is a foundational technology for them to begin a deeper foray into mobility. 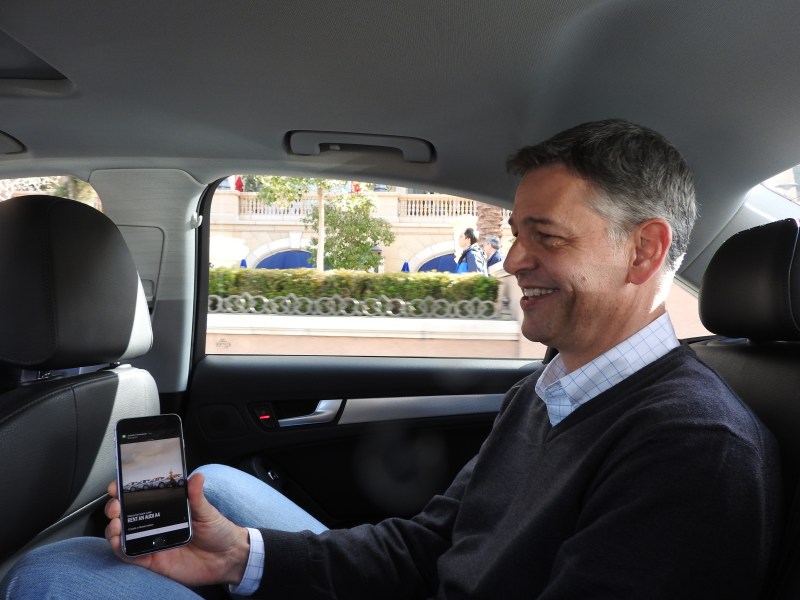 Above: Luke Schneider shows how easy it is to rent a car with Silvercar.

VB: What’s involved as far as the people who work with you, who have to drive back and forth to where you keep the cars? How do you try to make that work better than the rental car business?

What we try to do is twofold. One, we design the customer experience to minimize the time between when you head off the jetway and leave the lot. A lot happens in the car rental experience there — everything from transportation to the car, going to the counter, going to a floor in the garage, waiting in line for a check as you go out, whatever. That’s where we start.

In the first delivery model we bring the car to you and you scan it right there at the curb. We either have our guy jump on a shuttle back or we send a chase car if we have to. Second model is you get off the plane and get a notification from us — “Welcome to SFO. Tap here when you’re ready to be picked up and we’ll meet you here.” You do that and it dispatches our car to come and get you. You jump in and we take you to the lot and you scan the car there, if the airport requires us to do that.

The third way we’ve just begun piloting — the new hardware allows us to do this – is probably the fastest way you can get out of the airport. I got out of SFO in exactly four and a half minutes. We’ll stage your car in short-term parking. You get off the plane and it says “Your car is in short-term parking outside terminal 2, level D, space 18.” Get off the plane, walk out the door, down into short-term parking, see your car, scan it, jump in, and head out. The toll passes we have work with the gates at SFO and most places so you don’t have to pay to get out. You just exit the airport and you’re on the [highway] 101 in minutes.

The app detects what airport you’re at and customizes the experience for SFO versus LAX or anywhere else. When we design customer experiences, that’s half the battle. It’s trying to figure out how to remove all the uncertainty and inconvenience. How we differ from conventional car rental companies is you do the whole thing on your phone. We help you wayfind through the airport to your car. It’s not just, “Good luck, follow the signs and it’ll be out there.”

That’s kind of why the customer satisfaction for the service is so high. We have about five times the net promoter score as the rest of the industry. That’s largely because we take the uncertainty out of it. You always know what you’re going to get. Another big piece is you’re not wandering around, waiting in lines, trying to fend off the agent who’s upselling you.

VB: Do you calculate the average time saved?

Schneider: Yeah, but it’s such a wide variance. You could get in at a bad time and there’s a guy with an Eastern European driver’s license they’re trying to validate. Or you could be the first guy off the bus. You notice people just run to the counter now. There’s Hertz Number One Gold and other competing services on the loyalty front where you go straight to your car, but you still don’t know what kind of car you’re going to get. If you’re okay with whatever they give you it’s fine, but then you have to wait in line to get out of the parking area again. If you don’t like what you’ve got—The guys who founded the company got a white minivan on their golfing vacation. They might have gone back to swap it out, but that’s just added time.

VB: Before this, was the net promoter score [from -100-100] for the rental car industry pretty low?

Schneider: Yeah. Airport car rental averages about 18 on that scale. If you add in the off-airport stuff, it goes up to about 26. Half the industry is airport and half is off-airport. Ours averages somewhere between 85 and 90, and it has done for three years as we’ve tripled our business each year.

I learned early about customer experience design. I always felt like net promoter score is the one thing you keep your eye on. It’s created a loyal customer base. That’s one of the amazing things about this company. Without a loyalty program, people still love coming back.

VB: Are you any more or less labor-intensive than the rental car industry?

Schneider: My guess is we’re less. It’s harder to pull those out of their public filings, the ones that are public. But generally speaking, yeah. Our ratios are a lot more favorable. We do so much more through technology. We don’t have to staff counters, or have people constantly running back and forth. We don’t have people with hip-mounted printers checking you back in when you pull into the return lot. The car does all that work. From an economics perspective, we look a lot better.

The cool thing about it is, because we’re focused on a particular segment – we’re not competing in the $9.99 a day rental space, we’re up in the full-size and premium range – we can make this business perform very well at a relatively small scale.

VB: This particular market, was it easy or difficult to get started?

Schneider: In Las Vegas? It was pretty simple. One of the big pivots we made in the early days was to streamline the way we select real estate and design the experience for the location. We can get a location launched in a matter of weeks. We just decide where we want to go and go do it. It’s really a matter of where to go. That’s the question. We listen to customers about that. Las Vegas was the most-requested new location. As a result, it got the nod.

The value equation is what people are starting to look at. That’s what we realized. The time you save is one thing. Number two, especially in the full-size segment, the difference in the car you get — This car has a Wi-Fi hotspot in it. You can do pretty much all your connectivity stuff through it. It has satellite radio, which is kind of nice. It’s also got the in-dash. It uses embedded Google multimedia interface with Google maps. You get turn-by-turn directions if you want, or just overall view. The price at the pump for gas also makes a big difference — the convenience of not having to try and find a gas station in a place you’re unfamiliar with.