AlerSense is launching a smart sensor that serves as an early warning system for allergy and asthma air quality alerts.

The product demonstrates how the mobile device, big data, and Internet of Things trends are converging on the science behind detecting air quality for asthma and allergy sufferers. As particles and toxins in the air build, AlerSense gives you alerts when you are at home, at work, or on the move. If it works, it could be a popular item, as the global allergy diagnostic and treatment market is projected to increase to nearly $35.3 billion by 2015 from $31.5 billion in 2014, according to market researcher BCC Research. And the U.S. Centers for Disease Control and Prevention (CDC) estimates that one in 12 Americans have asthma and 17.6 million Americans experienced hay fever in the past year.

The Burlingame, California-based company said it can take accurate readings of the environment, giving people the cue to remove themselves from the area, take medicine, or even alter the environment.

AlerSense measures airborne contamination and toxins such as pollen, mold, dust, dust mite waste, volatile organic compounds (organic chemicals such as formaldehyde), and animal dander. All of those can cause allergy or asthma attacks.

The company was founded by a team of people who are determined to change the way we look at allergies and asthma caused by airborne contaminants.

“For the longest time we have accepted the fact that allergies and asthma attacks ‘just happen,'” said Skip Sanzeri, founder and CEO of AlerSense, in a statement. “We wanted to work on a project that would help people throughout the world understand when contaminants are building in the home so that they can make the appropriate adjustments.” 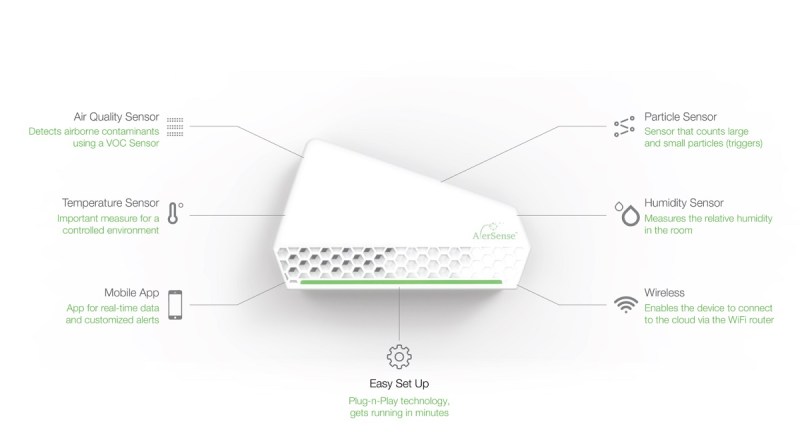 Above: The AlerSense smart sensor for detecting air quality.

He added, “We’ve combined some of the world’s most advanced sensors with a smart mobile app and extensive software algorithms that will allow users to record allergy and asthma symptoms at the time when they first noticed the symptoms. Our goal is to give consumers enough time so they have a change the environment. And the system gets smarter as it learns each family member’s sensitivities based on user input. Airborne contaminants are usually invisible to the naked eye and therefore attack unannounced. Well, we’re here to make the announcement.”

AlerSense said it will start shipping units in the spring of 2016. It is available for preorder now. The company has offices in Silicon Valley and Dublin, Ireland. Self-funded AlerSense has 10 employees and was founded last year. There are no direct competitors with a mobile device, but there are general air quality sensors on the market already.

“We differentiate significantly in the fact that first, our algorithms are tested against particles and toxins that are known to cause allergies and asthma,” Sanzeri said. “Our smart app learns as attacks happen so when similar conditions arise again, that user is warned earlier, and third, we expect over the next 12 months to actually differentiate particles which means we will be able to identify specifically what might be causing allergies, asthma or other breathing issues. This will be an unbelievable breakthrough.”

Sanzeri got the idea from similar sensors used to detect dust motes in chip manufacturing clean rooms. A few specks of dust can ruin an entire chip. Sanzeri figured that if that level of technology was available for clean rooms, he could eventually take it into a consumer device.

“I founded the company because I have been an allergy sufferer for most of my life,” Sanzeri said. “Whether spring allergies or animal dander, I, like many, have allergy attacks. My biggest problem with the situation is that I can never tell when I’m going to have an allergy attack. For instance if I come over to your house, and you have a cat, even though I have not seen the cat I will know within about 25 minutes as my eyes will become red and itchy, and most likely I will have to leave.”

Regarding how it works, Daniels said in an email, “The unit uses an array of miniaturized sensors based on semiconductor devices that are tuned to measure environmental parameters only within the range of interest to domestic users. By limiting the range to the most relevant levels we can enhance sensitivity and minimize device footprint. Each unit has an on-board miniature microprocessor to extract specific features from the raw sensor measurements.”