The Deadly Tower of Monsters has an inventive premise, but it feels like a pastiche of a much better game.

Developer ACE Team cooks up a charming title that parodies and mocks B movies and Hollywood. It lacks substance, however, employing mostly trite gameplay mechanics and poor level designs. It’s a 3D, top-down shooter with a fixed camera. The Deadly Tower of Monsters’ biggest strength lies in its presentation and clever ideas … and nothing else. You can play it now on PlayStation 4 and PC.

It begins with the pretentious, funny, and moronic director Dan Smith starting his commentary for the VHS and DVD release of his failed action film The Deadly Tower of Monsters. It’s designed exactly like a VHS or DVD version of the movie, replete with the capability to fast-forward cutscenes, rewind when you die, and Smith’s mostly amusing narration. The director definitely loves to voice his nutty opinions.

It stars three characters: Dick Starspeed, Scarlet Nova, and a robot named, well, The Robot. You can play as either of the three protagonists, and you can change between the three by simply using a special machine you can find throughout the game. They’ve to climb a giant tower and take down the evil emperor while fighting a panoply of outlandish enemies including dinosaurs, a giant gorilla, and dogs with vacuums for heads.

Don’t worry — Dan Smith has a somewhat reasonable explanation for the vacuums.

As a self-proclaimed film buff, I love what ACE Team is going for here. The Deadly Tower of Monsters is heavily inspired by plenty of B horror and action movies like Frog, The Toxic Avenger, and Starship Troopers. From the goofy creatures to the charmingly awful dialogue and villains, it pays a lovely homage to low-budget cinema.

I appreciate that The Deadly Tower of Monsters is self-aware. It knows it’s dumb and that it makes absolutely no sense. How can one film have dinosaurs, crazy monkeys, and huge ants? What the heck was Dan Smith going for? It doesn’t matter because, according to him, he made a masterpiece. I disagree, but don’t try arguing with the “artist.”

Dan Smith is the man 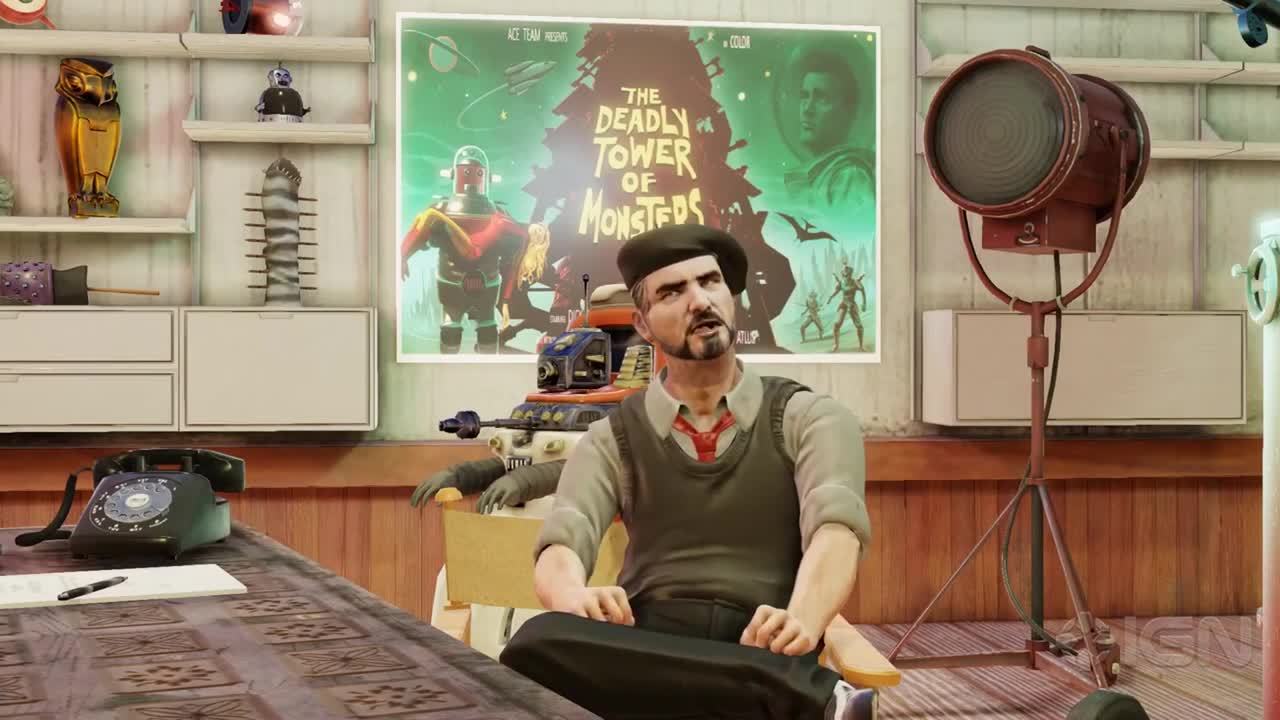 Above: Ladies and gents, Dan Smith himself.

Dan Smith is often a source of clever jokes and has plenty of passionate criticism for Hollywood, especially its producers, fans, and actors. He’s easily given the best and most dialogue lines out of the characters. I particularly enjoyed his bits about not showing up on set half the time, and giving all of the responsibility to his cinematographer, and putting vacuums on actual dogs because of budget reasons.

He made me chuckle quite a few times, and his constant acknowledgement of how ridiculous and ugly-looking his movie is surprisingly came off as sincere and brutally honest. He did his best, I think. The Deadly Tower of Monsters would be a lesser experience without the character’s presence.

You can shoot enemies using various projectile weapons and engage in melee combat with a bunch of goofy-looking swords, whips, and hammers at your disposal. While you’re constantly given new weapons, they all feel the same. You never get to learn cool new combos with any of them. Instead you’ll repeatedly press the square button to use your short-range weapons, and the right trigger to fire your guns. It’s far too streamlined.

It’s a repetitive, shallow affair that lacks depth. ACE Team should’ve taken a good look at DmC: Devil May Cry, as that game is a good example of how to pull off hack-and-slash combat and keep it fresh throughout a 10-hour campaign. You need to make the player continually learn new combos and moves. 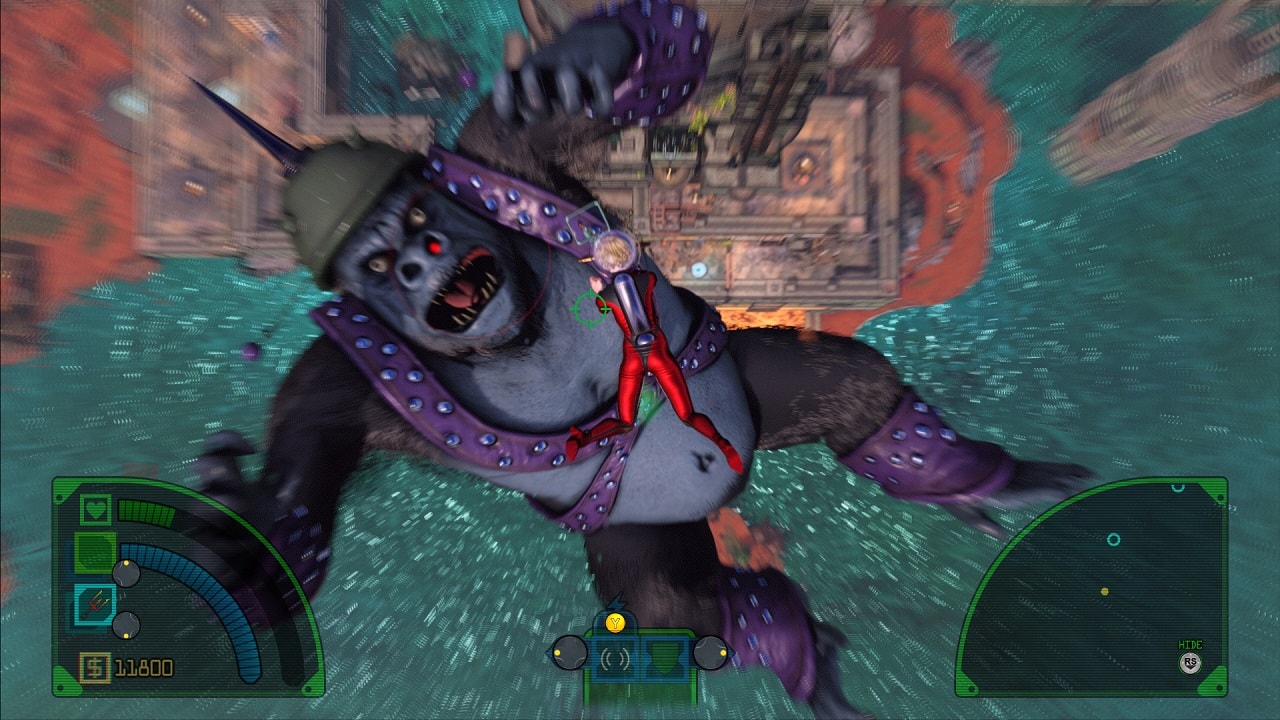 Above: You’re gonna have to kill this giant ape.

Also, battling enemies quickly becomes a chore, as The Deadly Tower of Monsters loves to throw large waves of baddies at you every five minutes. You have to kill every single one of the monsters in order to unlock barriers and doors, which is a lazy and outdated gameplay design I’m tired of. It has a few bosses as well, but killing them is an easy and dull affair.

The actual tower itself, which is where the game takes place, is poorly designed. It contains awkward paths and is a pain to navigate. It’s a complicated maze, one that forces you to regularly look at the minimap displayed at the right corner of the screen.

The fixed camera makes it worse, as it didn’t let me comfortably examine my surroundings. I would often find myself stupidly retracing my steps far too often, trying to figure out where I should go next. The only thing that saved me was the helpful yellow, subtle arrow emitting from the minimap, which doesn’t excuse the poor levels at all. I’d rather look at the world the developer made rather than a tiny, ugly minimap.

I commend ACE Team for trying to come up with something that’s authentic and clever. But the developer only got The Deadly Tower of Monsters halfway right. The excellent premise and likeable characters outshine the streamlined gameplay. ACE Team has something promising here, but it needs to nail the mechanics next time.

The Deadly Tower of Monsters is available now on PlayStation 4 and PC. Atlus provided GamesBeat with a PS4 digital code of the game for the purposes of this review.