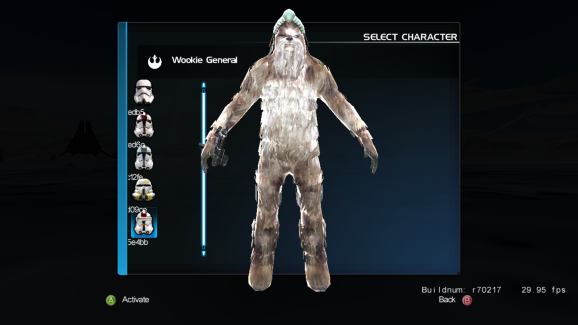 Revenge of the Sith-era wookie in Battlefront III.

Star Wars: Battlefront III, a shooter from the late 2000s from developer Free Radical, never saw a release, but you can download what looks like a legitimate version of the game and play it if you have a modded Xbox 360. You can find the download link on the Reddit thread about this leak. Publisher LucasArts cancelled Battlefront III around the time of 2008, but since then, numerous reports have shed light on the development of the game. That includes leaked screenshots and art. But now fans finally have the opportunity to try out a prototype copy of the game. This is different than the Star Wars: Battlefront that publisher Electronic Arts and developer DICE released in November. That was a spiritual successor to the LucasArts games, but it came from different companies, and it had none same people working on it.

We reached out to former Free Radical boss Steve Ellis, who now is director at studio CrashLab, and he said that this looks like the real thing.

“Yes, that looks familiar,” he told GamesBeat. “I’m not sure when the build was created, but it certainly seems legit.”

At least one person has downloaded the game and booted it up on their modded Xbox 360, and you can see it in action in the video below:

To play this, you’ll need either an Xbox 360 development kit, an XNA kit, or test kit. Those are all rare versions of the Xbox 360 hardware meant primarily for developers and some media outlets. But you can also use a modded Xbox 360 with the RGLoader homebrew software. This treats the 360 like a development kit, and it’ll load this prototype Battlefront III into a playable state.

If you do get it running, this is what you’ll see.

The game does not run on the Xbox 360 PC emulator Xenia. If you try to boot it up, the software will crash.

But this prototype is consistent with what we’ve heard about Battlefront III in the past. Free Radical cofounder Steve Ellis said in a 2012 interview with GamesIndustry.biz that the game was essentially complete. He says it was cancelled because LucasArts didn’t want to put money into promotion.

“LucasArts’ opinion is that when you launch a game you have to spend big on the marketing, and they’re right,” Ellis said. “But at that time they were, for whatever reason, unable to commit to spending big. They effectively canned a game that was finished.”

But now, it seems like at least some people will get the chance to finally play it.

Updated at 3:15 p.m. Pacific time with comment from Steve Ellis.