When the creator of Valiant Hearts: The Great War sets out to touch people’s hearts with a rhythm game, you hope for good things. When Grammy Award-winner Wyclef Jean signs on to provide an original track, the hype really starts to build. Digixart Entertainment didn’t hold back when it came to setting our expectations for Lost in Harmony.

The studio also didn’t hold back when it came time to produce results — the iOS title achieves much of what it set out to do. Through the language of music, art, and a bit of traditional narrative, Lost in Harmony tells the emotionally affecting tale of Kaito and his friend Aya.

Nothing is so important to a music game as its soundtrack, and Lost in Harmony comes through. Twelve of its 13 levels rely on arrangements of classical and traditional music by Holst, Wagner, Bach, and others, occasionally joined by modern composers. Together, the tracks do a wonderful job of hitting the right emotional notes at the right moments.

One track doesn’t follow this classical trend: Everlasting Reverie, an original song written and recorded for the game by Wyclef Jean. I’m not generally a fan of the artist, but I have to admit that it’s a beautiful song, used to beautiful effect.

Part of that effect comes from the visual presentation. Kaito skateboards through each level, boosting Aya on his back. The environments they travel through really sell the music’s emotional messages. Each level is built from hand-painted backdrops, obstacles, and props that come together like little music videos set in all sorts of locales, from calm forests to refugee camps. In one, you might swipe to avoid mines and biplanes. In another, you might tap the stars in the night sky.

Wyclef Jean’s Everlasting Reverie sets the mood for an intimate trip down the beach with someone you love, and that’s just what its level’s visuals and interactions provide. Above: A typical chat between Kaito and Aya.

That trip down the beach is part of the emotional arc, which is supported with narrative moments between songs. These are presented like they might be in a visual novel, capturing messages that travel back and forth between Kaito and Aya. Months fly by between levels, bringing you closer to the end of a story that carries genuine weight.

Some moments fall flat — a little too predictable, or too awkwardly worded. But the music ties it all together, and it more than covers for the times that conversation falls apart.

A community for level sharing

If the story isn’t to your taste or you’ve gotten all you can from it, Lost in Harmony also offers a robust level editor. With a little care, you can create levels just like those in the game – obstacles, backdrops, stardust, beats and all. SoundCloud integration means you have a huge library of songs to choose from, and there’s some support for importing your own tracks, as well.

The editor can be a little fussy, but that’s only because it needs to support so many different elements. When it comes time to share, Lost in Harmony has nearly everything you could need: play count tracking, replay recording, leaderboards–it’s only missing a search interface and the ability to rate levels.

Lost in Harmony still tries to fit the high-score mold popular in other rhythm games, and that’s where it falters. When you aim for three stars in an arcade rhythm game, you want a steady beat, a consistent experience and precise controls.

Lost in Harmony throws all of that out the window for the sake of emotional resonance.

The music is evocative, but it isn’t usually catchy. The classical arrangements travel through emotional highs and lows, and the beat goes with them. This is not a bad thing in itself, but without many hooks to dig into, it’s hard to keep repeating levels in the quest for perfect scores. 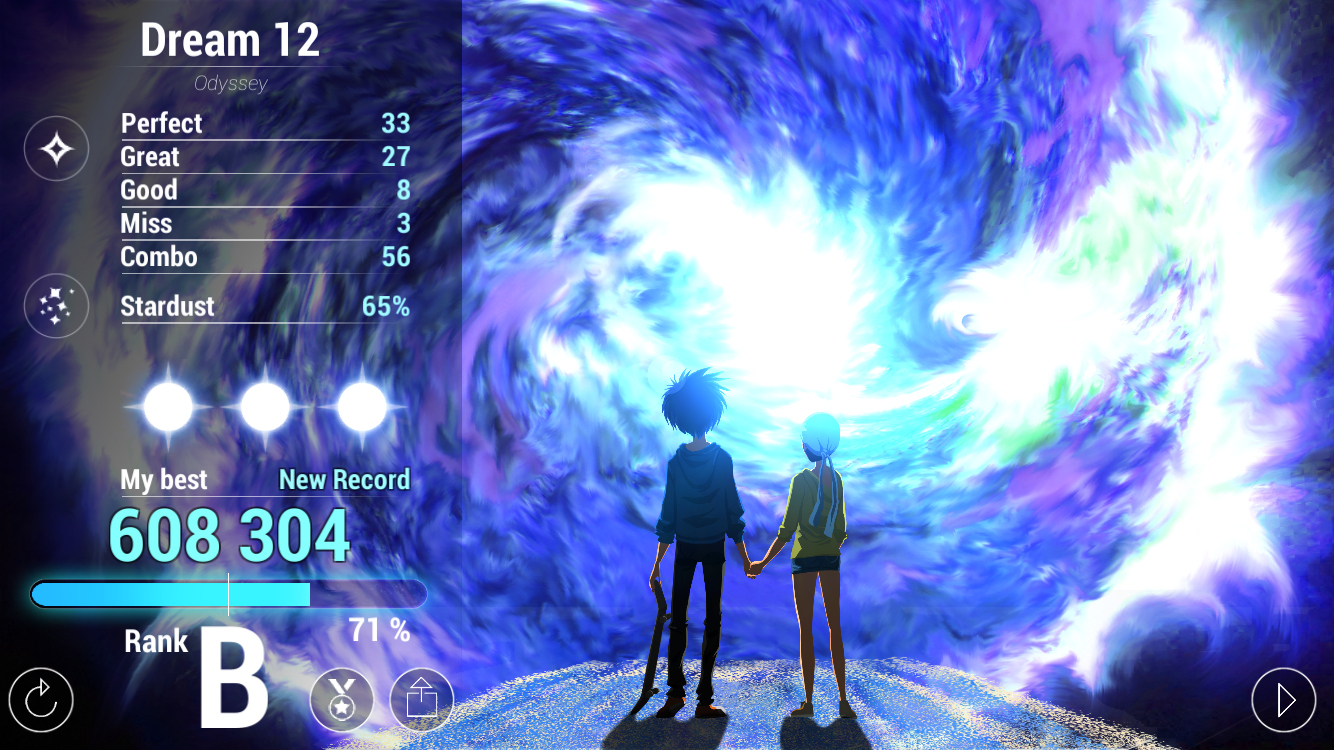 Above: High scores are possible, but they aren’t the most rewarding part of the experience.

It may also be better not to try. With each level full of so many different interactions, the path to 100 percent is far from obvious. You have to master the beat, follow a stardust trail precisely, and complete a running platform challenge — three tasks that don’t always mesh well. Arcade-style rhythm games ask one thing: did you hit the right note at the right moment? Lost in Harmony gives you a lot more to keep track of and a lot less feedback.

New devices have an extra obstacle, too: 3D touches register as jumps, and the difference between a long press and a 3D touch is just too subtle to work in the player’s favor consistently.

Since there’s so much going on at all times — beat markers popping up across the top of the screen, stardust leading your path below, and obstacles coming from all sides — Aya serves as an early warning system. She hollers when trouble approaches, and points out when beat markers appear. She nudges you when there’s nothing else going on. She groans when you smack into obstacles, which is not the best accompaniment to a growing sense of frustration.

Hypothetically, these calls might be helpful, but when Aya peppers the soundtrack with tinny exclamations, “Hey!” “Oh!” and “Uh!” just blend together into so much noise. Does an hour of “Hey, Listen!” sound good? If not, Aya’s contribution will get old pretty fast.

Not Aya herself, though. She’s a good friend to have along for the ride.

Lost in Harmony certainly tries to be too many things at once – a platformer, a rhythm game, a visual novel, and an emotive musical experience simultaneously. If it mastered any of those forms, it could be brilliant. It’s just not quite there. But it’s also not far. The interactions between characters might be stilted or flat at times, but other moments feel genuine and heartfelt. The levels’ themes don’t always fit the narrative, but each is a fascinating little diorama that has a story to tell. Lost in Harmony is weakest when you chase high scores, and strongest when you let yourself get lost in the music.

Most of all, it’s ambitious. Mobile games and music games both tend to get short shrift when it comes to emotional narrative arcs. Lost in Harmony commits to one, and does its best to bring that through in level design, musical selections, and even small details like costume picks.

It also brings us a new Wyclef Jean single, but don’t assume that means it’s just a rhythm game wrapper for an upcoming hit. That may be the best evidence that Lost in Harmony works: an original track by a well-known artist doesn’t feel like a gimmick. It feels like a perfect fit.

Lost in Harmony is available on iOS. The developer provided GamesBeat with a prerelease copy of the game for the purposes of this review.