Mario & Luigi: Paper Jam could have used a pair of scissors.

It’s an almost magical, Mario-meets-Mario adventure, and it had the potential to be one of the 3DS’s finest offerings. The comedic, cameo-filled tale brings together two of the plumber’s RPG franchises to near-great — but not perfect — success, creating a self-referential adventure that is not only a lot of fun but also suffers under the weight of new gameplay elements that don’t jam well with everything else.

What could have been an amazing start for the 3DS’s RPG-heavy lineup this year instead is simply a good game otherwise marred with frustrating sections. The result is something that could have been really special, and instead suffers under its own excess and implementation of bad ideas and gimmicks.

After Luigi accidentally finds the book containing the Paper Mushroom Kingdom and releases its inhabitants into the three-dimensional Mushroom Kingdom, both the Mario & Luigi and Paper Mario parallel universes (that’s canon now, baby!) collide. This means two copies of each character (except Luigi, who is an odd omission that’s never addressed), including two Bowsers … and two Bowser armies to fight. Mario and Luigi team up with Paper Mario in an attempt to stop Bower and Paper Bowser from combining their powers and, well, you know, being evil and doing evil things. This is a Mario game, after all.

Mario & Luigi: Paper Jam offers plenty to like. The mashup premise successfully brings together two different Mario universes in mostly humorous ways, and it brings new life to a franchise that Mario & Luigi: Bowser’s Inside Story crushed my love for. The two-worlds-together idea is a strong foundation that is just crazy enough to work.

The writing is full of silly moments, poking fun both at itself, and the larger Mario universe. At one point Peach has a conservation with her Paper counterpart about how she’s sick of being captured — but actually secretly enjoys Bowser’s Clown Car rides. She then mentions how she wants to change her hair style and signature dress but “someone” keeps talking her out of it. It’s funny stuff, and it shows a flexibility, humor, and side of Nintendo that isn’t often seen in its games. It’s cute and clever when it needs to be while also coming up with some awesome lines, like the Goomba war chant: “Our bodies may be stomped, but our will cannot be crushed.”

The series’ turn-based combat system is great, and this hasn’t changed much. It manages to address the fatigue one can get from playing other turn-based RPGs — you always have to be active, even during enemy turns — and your capability to learn the moves impacts your success at performing them. Unlike other turn-based RPGs, you have to be ready to press a button at the correct time to do more damage or to successfully counter or dodge a move, making you feel directly responsible for every action.

Throughout the 30-hour adventure, you’ll transform enemies into giant kites, launch rockets, throw paper ninja stars, fold into an airplane, all while frantically pressing buttons trying to do as much damage as possible. For most of the length of the story, it successfully balances being challenging with being rewarding and fun. Many of the early boss battles have interesting and unique twists, and the cast of characters is full of familiar faces and fun cameos from throughout Mario’s various adventures. 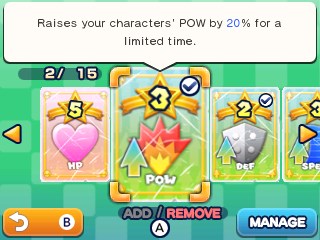 Above: The Battle Card system is a great new addition to the game’s battle system.

A new Battle Card system, once unlocked, makes use of the 3DS’s lower screen to create an interesting addition, as well as bringing in deck-crafting and card-collecting mechanics. It’s a welcome new feature, and this adds another layer of depth to battles. It not only gives the lower screen of the 3DS a use, but it also gives the game a fun collectible card game flavor, which is always a good thing. I really hope Battle Cards stick around and become a permanent part of the franchise, and are further expanded upon in sequels.

While enjoyable, a few aspects of Paper Jam just drag. While it may seem to weird to say cutting content would make a game better, this is very much the case here.

The main one is the obnoxious Paper Toad quests. At various, and mostly mandatory, points in the story, it locks you in a closed-off quest area where you hunt around for hiding Paper Toads. Yawn. Nobody wants to play hide-and-seek in an RPG. It’s not fun, and at times it’s downright frustrating. I was stuck wandering an area several times, searching for a cheaply hidden Toad with no indication where to look or what to expect. One Toad was hidden by a really awful camera angle, and it’s only because of luck and much frustration that I finally found it.

Another later Toad quest is timed, making things even worse, and some of the late-game quests get downright infuriating. It’s poorly designed filler content that’s unnecessary, and it kills the story’s momentum. Get rid of them — forever.

Paper Craft Battles is another new addition to Paper Jam, and they’re also unnecessary. Sloppy aiming and camera controls, mixed with pretty much infinite health and energy, ruin what could have been fun Godzilla-style giant battles. It’s another new gameplay element that takes away from the core RPG battles that Paper Jam does so well. These side sections and quests just don’t fit, and Paper Jam relies too heavily and forces them too often. Remove them all, and the resulting experience is not only streamlined, but greatly improved. 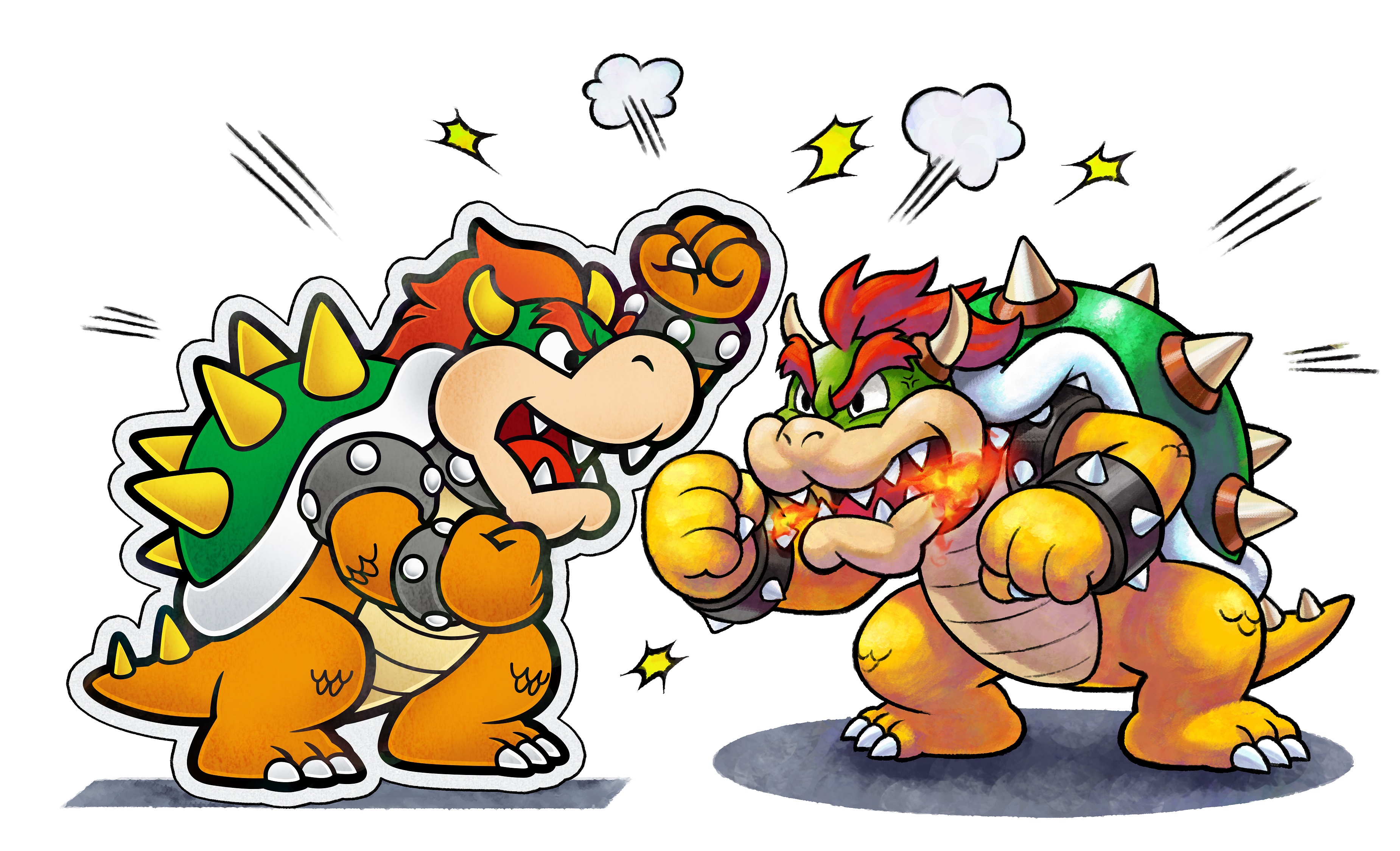 Above: Bower meet…Paper Bowser. Get ready for these two to fight…a bunch. Yeah, it gets old.

The finale compounds most of Paper Jam’s problems, with a lot of unnecessary backtracking. One timed quest was especially frustrating, with long battle animations making it even worse. I failed it several times, and once Paper Jam allowed me to skip it, I did. It also has a really cheap timed boss and a chain of rehashed Paper Craft battles and boss fights. Much to the cost of my pride, I finally had to switch to easy mode just to make it through some of the final stretch for the review.

The difficulty starts to fall on the wrong side of the fun/challenging balance, with the boss fights getting longer and harder — and they were long to begin with — all the more frustrating when almost all of them required two attempts to beat. I like that the battles, especially for a Mario game, have teeth, but it pushes that balance too far toward extreme.

The Amiibo functionality lets you create more cards to use in battle, but for some reason, in order to actually use these cards you need to scan the Amiibo each time. This means you need to be carrying your Amiibo around with you to use one of the cards you make for them. That’s something that just isn’t going to happen with a portable game. I stopped using it after the first try.

And while I’m at it, the Mario & Luigi graphics design still needs work. It’s gotten better, but it just looks ugly jutted right next to the Paper Mario aesthetic. The 3DS is more than capable of better graphics than this.

My time with Paper Jam was great early on, and I was thoroughly enjoying what I was starting to think may be one of the better 3DS games in recent memory. But the longer it went on, the more its problems became apparent. Somewhere in Paper Jam are trappings of a great game.

Some games suffer from not enough content, but a few simple reductions in Paper Jam could have gone a long way. The inclusion, and reliance, on the weaker elements bring down the overall experience, creating something that, ironically, is quite the jamming of ideas its moniker implies.

Mario & Luigi: Paper Jam is out now for the Nintendo 3DS. The publisher provided GamesBeat with a copy of the game for the purpose of this review.