Exploding Kittens kaboomed its way to the top of the paid-apps category in its first few days on the Apple iTunes App Store. That was an auspicious debut, coming after the tabletop-card version was a big hit last year. And it owes it all to a brilliant name and a concept of playing a Russian roulette card game with kittens that blow up.

But does it really live up to its billing? We’ve had a look at the iOS game now, as I have squared off in many matches against my 12-year-old kid. We’re still playing it during our free moments, but it’s not as explosively addictive as I would have hoped for a $1.99 release, which is a rarity in an app store full of free-to-play titles. The title is fun, but I expected more. It isn’t quite there yet.

Exploding Kittens had so much going for it. I wonder how it could have fallen short. The tabletop version certainly seems hilarious enough. But Paul Rush, CEO of developer Substantial, acknowledged in an interview that it’s not easy to adapt a card game to mobile. The devs have succeeded in creating outstanding sounds to go with cards that let you “kitty slap” other players or give them diarrhea. The cards will make you laugh out loud. But, I can understand why the app only has 2.5 out of 5 stars so far in the player ratings. 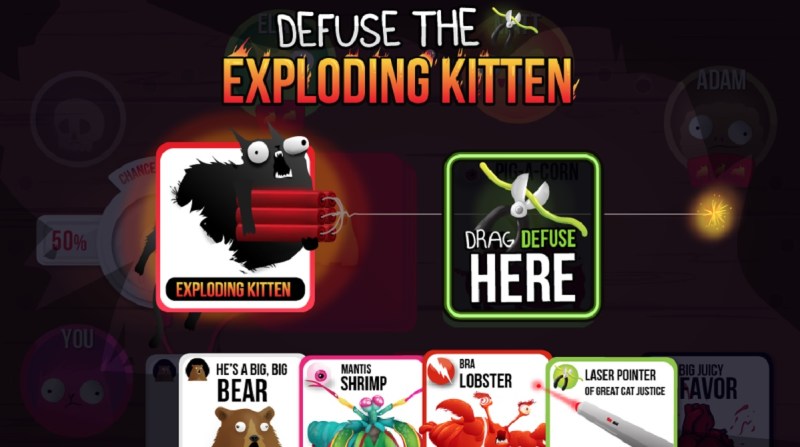 Above: Uh oh. Time to use a defuse card in Exploding Kittens.

It’s a disappointment because the tabletop card game was the most funded game in Kickstarter history, raising more than $8 million from 219,382 contributors. Its creators are Elan Lee, the creator of Edoc Laundry; Matt Inman, the creator of The Oatmeal online comic; and Shane Small, the former principal art director at Xbox Entertainment Studios. The game’s zaniness, the Oatmeal’s involvement, and its viral status on social media helped propel it into the stratosphere.

For the mobile release, the Exploding Kittens founders teamed up with Seattle-based digital product studio Substantial to create an iOS app that would not just replicate the original game but evolve and improve it for old and new fans alike. Two to five players can play it as a multiplayer title, but they have to be in the same room. The digital experience has new cards that the paper one doesn’t, and it has sound effects. The app is built in Unity, and it uses art from The Oatmeal.

In the table edition, you put the deck of cards face down. You take turns drawing cards, and if you draw the “exploding kitten” card, you are out — unless that player has a “defuse” card that can neutralize the kittens with laser pointers, kitten therapy, and catnip sandwiches. You can also deploy a tacocat, Abracrab Lincoln, magical meat bikini, and a catterwocky. Action cards do things like remove or mitigate the kittens. You can deploy the thousand-year back hair, peek at cards by rubbing the belly of a pig-a-corn, skip a turn by wearing a portable cheetah butt, or seek out the wisdom of a goat wizard. You have to decide which cards to play, when to play them, and which of your opponents to target. Every card you draw increases your odds of drawing the exploding kitten, making things more tense as a match progresses.

A catty sense of humor 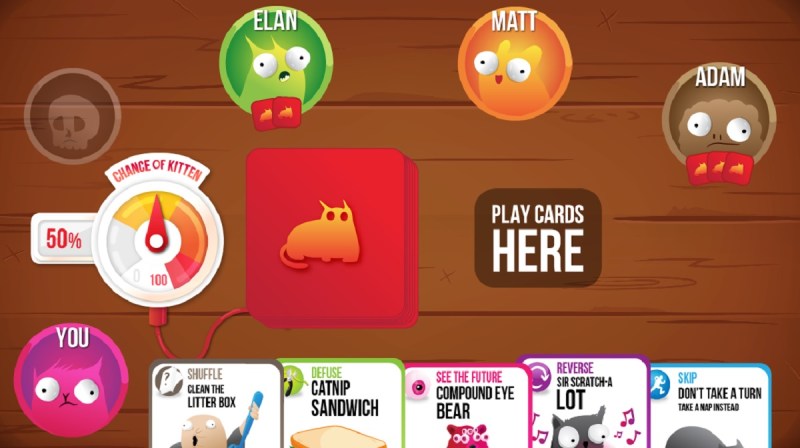 Above: A match in Exploding Kittens.

OK, it’s more than catty. The game has an uproarious sense of humor. I laughed just looking through the cards that I received in the very first hand. The card for skipping a turn says, “take a nap instead,” and it shows a napping cat. The card for seeing into the deck shows an image of a bear with a “compound eye.” You can defuse an exploding kitten card by distracting the cat with a “laser pointer” defuse card. The “draw from the bottom” card shows a picture of a baby and adds, “like the little scared baby that you are.”

This stuff just makes you giggle, and it carries the point of the cards home so that you remember their purpose. When you play these cards against your friends and family members, you’ll howl with laughter.

The strategy for every player is to put off the inevitable. Like in Russian roulette, someone has to draw the exploding kitten. But, you can put that problem off in a variety of ways. You can skip your turn and make your rival (up to four other players) draw a card instead. You can freeze another person’s card with a “diarrhea” card. You can steal a card. When you get stuck with the exploding kitten, you can defuse it maybe once or twice. Then, you can add it back to a part of the deck where you choose, and your opponents won’t know your choice.

All of these cards give you a variety of strategies to pursue. You can screw over a player or make an alliance with another. I can see why the creators chose to focus on in-room multiplayer because the reactions you can get when you screw other people over are so funny. If this happened over the Internet, it wouldn’t be as fun.

I used a card to see through three of the top cards. The exploding kitten wasn’t in those cards, so I knew I could keep drawing new ones, which gave me abilities like a chance to skip a turn or steal a card.

But, I laughed out loud when I played a card that turned my opponent blind. The “nothing but cat butt” card made my kid’s cards turn around and show nothing but cat butts. So, my kid couldn’t see which cards to play. That made things much easier for me to win.