Apple’s earnings each quarter are easily more scrutinized than those of any other company in the world. That’s part of the price you pay for being the world’s most valuable company.

Still, the earnings report due to be delivered tomorrow has taken on an even more epic feel than usual. The reason is simple: Some analysts are betting that sales of iPhones year-over-year will fall for the first time ever.

For my part, I’ll believe it when I see it. But I understand that for most people, this promises a simple, unmistakable narrative. The company’s flagship product is stalling, and Apple’s best days may be behind it.

There is certainly a symbolic significance to the moment (if it happens). Since its debut in the summer of 2007, the iPhone has had a remarkable run of sales increases. But that was always bound to end at some point. And we may now be at that point.

But that hardly spells disaster for Apple. The company has been close to this same point before, and not that long ago. In fact, on this same day two years ago, I wrote a story with the headline: “Exxon surpasses Apple as world’s most valuable company.”

Then, as now, Apple’s stock was getting hit hard. In fact, much harder. It had been shaved almost in half in the preceding four months. And when Apple released the same holiday earnings report in January 2013, its stock plunged more than 10 percent on disappointing iPhone sales and weaker-than-expected guidance.

Two years later, Apple will report that it sold almost twice as many iPhones as it did in January 2013. Only in Wall Street Land could this be considered an unmistakable “disappointment.”

Of course, going back to October, Apple has never hinted that this quarter would be anything other than flat-ish.

Executives guided to between $75.5 billion and $77.5 billion revenue for the last three months of 2015. A Yahoo survey of 36 analysts generated an average expectation $76.61 billion for the quarter.

That’s not up much from a year ago when the company reported $74.6 billion. The “problem” for Apple is that $74.6 billion was up massively from the $57.6 billion it reported the previous year.

That huge bump last year came courtesy of the new iPhone 6 and iPhone 6 Plus, which helped the company sell 74.468 million units — up 46 percent from 51.025 million the year before.

Now, CEO Tim Cook has said he expects the company to sell more iPhones this holiday quarter than it did a year ago. It’s a tough comparison for sure, and several analysts think the company won’t make it. But Philip Elmer-DeWitt, writing for Fortune, notes that his poll of analysts indicates an average expectation of 76.5 million units.

If he’s right, iPhone units sales would be up 2.7 percent for the quarter. That’s not so bad, considering Apple only released modest updates to the flagship phones this year. When it did the same two years ago (with the iPhone 5s and 5c), unit sales were up only 7 percent.

This is hardly sky-is-falling stuff.

But, whether iPhone sales increase or drop, it’s worth remembering that the exact sales number can easily be tweaked by Apple.

Or maybe Apple won’t care, and is willing report lower iPhone sales and weather the hue-and-cry of a down quarter just to get it over with it.

That’s all just to say, don’t get too hung up on a slight increase or decrease. It matters less than you think. Either way, the company is selling a monster number of iPhones that are generating gargantuan sums of cash.

Now, part of the doomsday scenario being floated involves Apple being downgraded from a “growth” stock to a “value” stock. This recent New York Times story is pretty representative of this fear:

“Investors have long relied on Apple to deliver one crucial attribute: growth. Now they are beginning to wonder whether Apple’s days as a growth stock are coming to an end.”

This story points out that “the era of the company’s producing 50 or 60 percent annual revenue growth may be on the wane.” Yes, about three years ago.

Before 2012, the company had a few years of around 50 percent growth. In FY 2012, it was just under that mark. Since then? Mostly well below, with the exception of last year when the iPhone 6 drove some big numbers. But overall, the trend of slowing growth has been clear for several years. 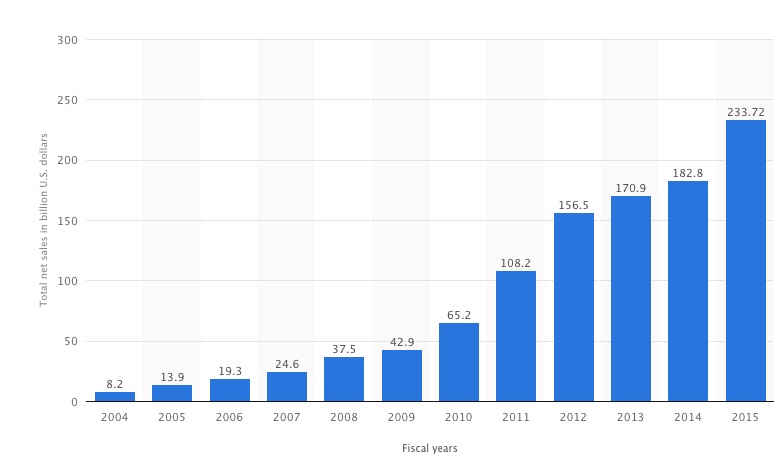 Why is this shift from “growth” to “value” stock terrible? The NY Times says it could result in stronger efforts by growth investors to unload its stock to value investors, which would drive the price down for a long stretch. And then there is the perception that Apple would be lumped in with fuddy-duddy tech companies like Cisco Systems and Oracle.

It’s hard to address the “perception” argument. I’m not sure how much that will impact consumers’ decisions. But again, brand-wise, Apple lost its status as the rebellious outsider years ago.

As for the investor shift, that has been happening for several years. That’s why, in 2012, the company announced it would pay out its first dividend in almost two decades and initiated a massive stock buyback program. And it’s why the stock, two years ago, attracted the attention of the ultimate value investor, Carl Icahn, who hounded Apple into increasing those stock buyback and dividend programs to record levels.

Even while the shift was underway, Apple has seen its stock rebound. And now it’s getting knocked again. It’s seen iPhone sales slow, and then boom again (and now maybe slow again).

Throughout all of this seeming turbulence, the company has just kept on doing what it has done for most of the past 15 years. It’s still hiring like mad. It spit out several new products last year. It’s still building a new palace to call home in Cupertino (allegedly ready later this year). And it’s still generating more cash every year than any other company (and some countries) could imagine.

So it’s hard to believe that much will change in the coming year or two, no matter what the earnings tell us tomorrow. And it also seems just as reasonable to bet that a new round of refreshed phones later this year will juice sales again. Or, maybe not.

But none of this, obviously, is as much fun as drawing hysterical conclusions about what Apple’s earnings mean for the company, the tech industry, and the little green man who lives in the moon.

As such, I will predict that shortly after the markets close Tuesday, we can expect it to start raining nonsense with scattered absurdities.