Esports, where professional gamers play video games in competition with others, have grown to a big spectator events, driving big companies such as ESPN, Activision Blizzard, and Electronic Arts to form esports divisions in recent months.

The audience for esports has grown to 131 million enthusiasts (up 27.7 percent) and another 125 million occasional viewers who tune in mainly for the big international events, Newzoo said.

“In 2016, North America will strengthen its lead in terms of revenues with an anticipated $175 million generated through merchandise, event tickets, sponsorships, online advertising, and media rights,” said Pieter van den Heuvel, esports analyst at esports, in a statement. “A significant part of these revenues flows back to the game publisher, but across all publishers, more money is invested into the esports economy than is directly recouped by their esports activities.” 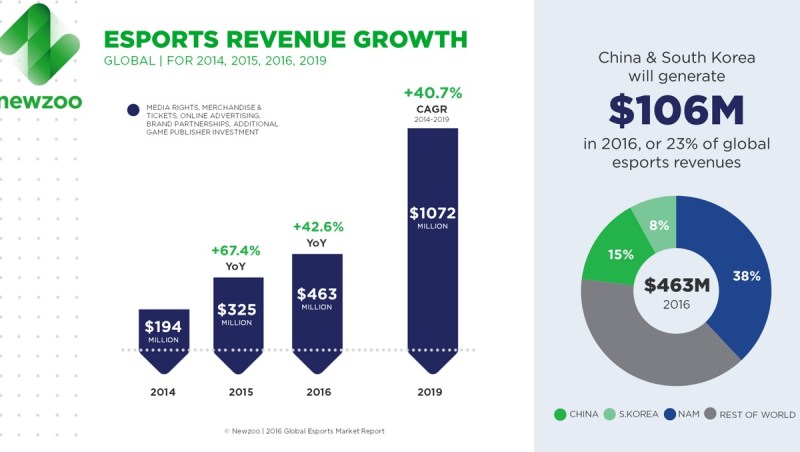 Above: China and South Korea are fast-growing markets for esports.

Peter Warman, CEO at Newzoo, said in a statement that 2016 will be a pivotal year for esports.

“The initial buzz will settle down, and the way forward on several key factors, such as regulations, content rights and involvement of traditional media, will become more clear,” Warman said. “The collapse of Major League Gaming (acquired by Activision) was a reminder that this market still has a long road to maturity and we need to be realistic about the opportunities it provides.”

He added, “In that respect, it is in nobody’s interest that current market estimates differ so strongly. Luckily, when zooming in on the highest market estimates of more than $700 million, the difference is explainable by an in-depth look. This estimate only differs in the revenues generated in Asia (Korea in particular) and by taking betting revenues into account. At Newzoo, we believe betting on esports should not be mixed into direct esports revenues as the money does not flow into the esports economy. Similarly, sports betting is not reported in sports market reports.”

Newzoo said that the past year was dominated by the sheer number of investors who have gotten involved in esports. That has increased the value of the esports sphere. All major publishers have increased their investment in the space, thanks to the convergence of online video, live events, and the games themselves.

“The role that mobile screens play in this is crucial,” Newzoo said. “We believe the uptake of mobile games as esports will accelerate in 2016, particularly in Asia, as many start-ups intensify their efforts and global mobile players get involved. Supercell’s most recent title, Clash Royale, is the ultimate example.”

There were 112 major esports events in 2015, and they generated $20.6 million in ticket revenues. The total prize money of all esports events held in 2015 reach $61 million, up 70 percent from a year ago.

Online advertising is the fastest growing revenue segment within esports, up 99.6 percent on a global scale compared to 2014. Average annual revenue per esports enthusiast was $2.83 in 2015, and that is expected to grow to $3.53 this year.

By comparison, basketball generates revenue of $15 per fan per year. The esports audience is a valuable demographic, skewing toward consumers with  full-time jobs and high incomes. 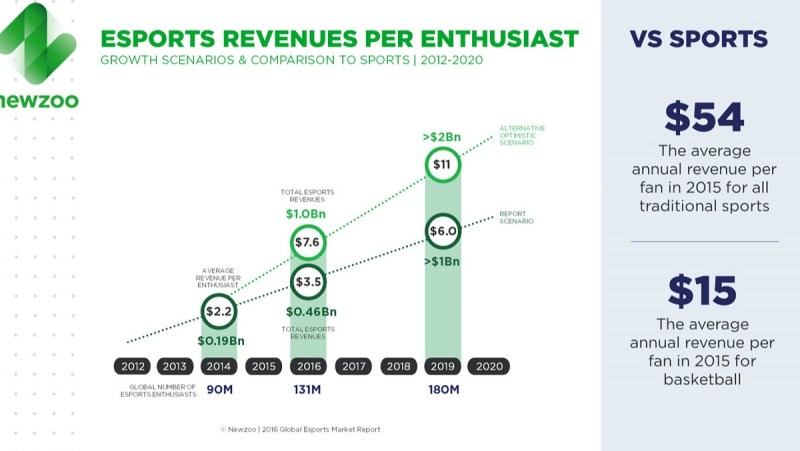 Above: Esports revenues per enthusiast are at $2.83 per year. Basketball generates $15 per year.