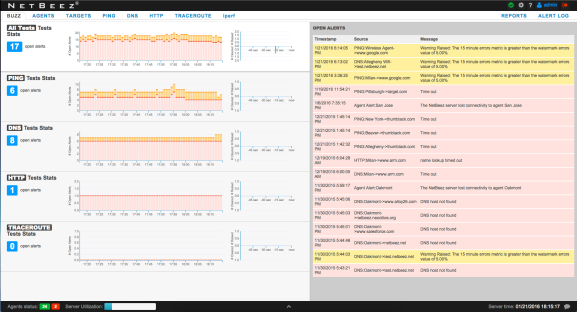 Considering how vital a company’s Internet connection is, finding out that your network is down can be a crisis for engineers, who often are notified about outages from the end user. Not having access to servers and applications could cost a business in productivity, revenue, and likely all facets of its operations.

NetBeez, a Y Combinator startup, has developed a system it says lets companies be proactive in identifying and resolving performance issues around enterprise infrastructure and cloud applications. Today it has launched a free tier version aimed at non-enterprise users and developer operations teams with few locations.

“In multi-site companies, network engineers rely on calls from the end users to detect and troubleshoot network and application issues,” said NetBeez CEO Stefano Gridelli. “This has two major downsides: First of all, network troubleshooting is a long and costly process that requires skilled engineers that use the command line interface of routers and switches to gather the data; also, this is a reactive method that takes time and involves sometime even the end user in the process. Second, network downtime can be expensive in terms of productivity lost and customer services downtime.”

While NetBeez’s customers have on average 30 remote offices across markets like higher education, financial services, health care, and retail, it’s now looking at a larger market: network administrators who manage fewer than five locations and devops teams that support distributed services running in the cloud. It’s likely that the focus is on the fast-growing startup and medium-sized business space, especially those that are just starting to branch out into multiple offices, but which may not have as big of a need as Fortune 500-type companies.

Founded in April 2013 by Gridelli, chief technology officer Panickos Neophytou, and chief operating officer Panos Vouzis, NetBeez utilizes hardware sensors such as Raspberry Pi to monitor a company’s network. Its goal is to reduce the amount of effort network administrators and IT teams will need to fix an outage.

NetBeez deploys network monitoring agents that simulate a real user on the network. By doing so, engineers and devops teams will be aware of potential problems that could affect the end user. Information is displayed on a browser-based dashboard so companies will know what needs troubleshooting. NetBeez claims that its network sensors can monitor wired or wireless networks, data centers, and cloud infrastructure like Amazon Web Services, Google Cloud, or Azure.

Using low-cost hardware in its solution, NetBeez continuously runs transactions with web services and distributed applications, testing the programs to see if a user would encounter any errors. “The NetBeez distributed agents perform the checks and measurements from multiple points, like remote offices where business users sit,” Gridelli said. “This provides quick detection and fault triage of complex network and applications.”

He also cited his company’s strength in looking at both wired and wireless agents: “An increasing number of companies have large portions of their user bases connected wirelessly. One example is universities, where even up to 80 percent of the users are wireless. In these environments, troubleshooting performance issues is challenging because external factors (microwaves, water, other wireless networks) can impact the quality of the wireless signal,” Gridelli said. “With NetBeez, it’s possible to monitor a WLAN from the wireless client perspective and compare that performance with a wired agent.”

The company sells its network monitoring service on an annual subscription basis starting at $3,600 for up to five hardware or virtual agents. Gridelli said that the price per unit will drop based on your needs thereafter. It competes with SolarWinds, Riverbed, PRTG, Zabbix, and others.

The network monitoring service has also sparked interest from investors. NetBeez announced that it has raised a $545,000 seed round from Y Combinator, Carnegie Mellon University, Innovation Works, angel investors, and AlphaLab. It also includes funds that the company raised over the past three years from other programs. The new capital will be used to broaden user outreach and improve its product.

Update on 2:30 p.m. PT on Monday: This post has been updated to reflect that NetBeez’s seed round included funds raised to date.