The game industry is full of interesting real-life characters. Street Fighter V producer Yoshinori Ono is one of them.

The charismatic caretaker of the Street Fighter series isn’t like a lot of developers I run into. He contains this intense fun, lighthearted energy of someone that really enjoys being where he is and doing what he does.

If there is ever a time to not be full of fun energy, it’s during a cold, rainy morning in a downtown San Francisco office. Ono is sitting at one end of a conference table with his trademark lucky Blanka figure flanking a banana and a coffee. Across from us is Mike Dahlgren, director of marketing and esports at Capcom of America.

I notice that Ono hasn’t taken a sip of coffee yet, but his energy is radiating throughout the room. He is by far the most awake and alert person at the table.

Yoshinori Ono: I’m sorry, I’ll be eating breakfast here. [Gestures towards the banana] We tried to get here earlier, but there’s no anticipating this level of rain and wind.

[I think about Ono’s Twitter account, and how he seems to update it daily either from an airport, on a plane, or at an event. The man seems to be in constant motion throughout the globe.]

GamesBeat: You know, I’ve always wondered … how do you have all this energy? I know you travel the world constantly. How can you always be so bright and wide awake?

Ono: …but you guys in the media are coming to all these press interviews on time despite the weather. We have tournaments at night and fans always come. It’s an opportunity to connect with people, that opportunity is what gives me energy. Even toward Capcom internally, toward fans and the media, almost everybody is very friendly and sociable.

Some people do give us some very difficult questions, but for the most part everyone’s nice. I appreciate them all … these opportunities, I’m always very thankful for them.

[He finally takes a sip of coffee. …] 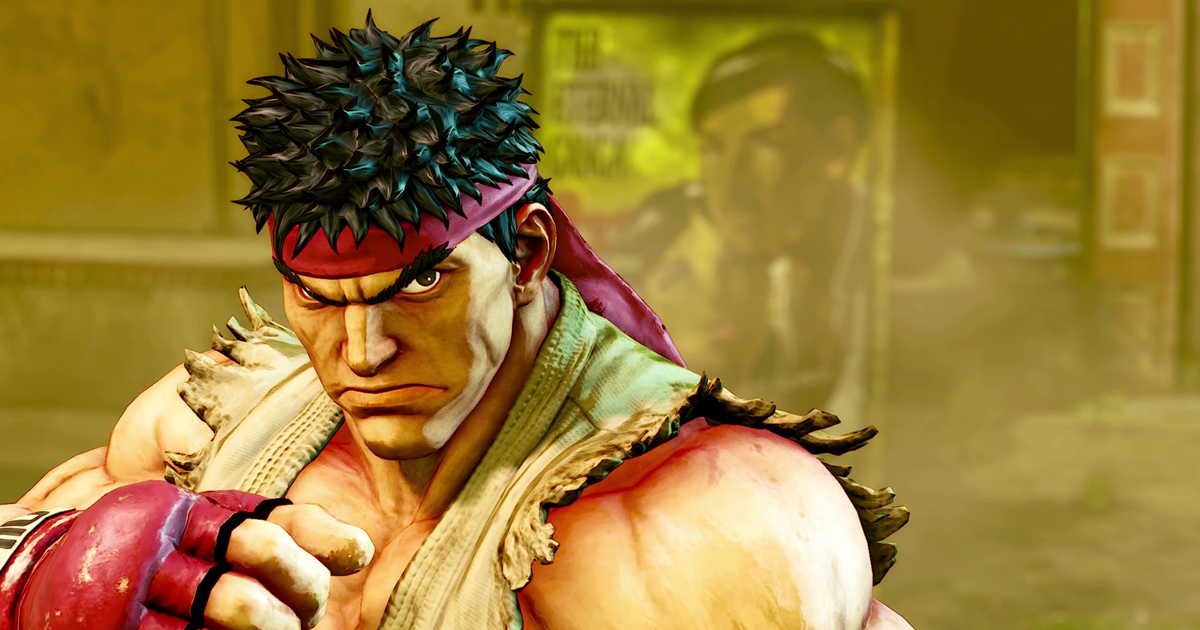 GamesBeat: So, here we are! Is there anything new you can discuss about Street Fighter V?

Ono: As a result, we talked about this in earnest on the R&D side, putting some real effort into this. Looking at Mortal Kombat, what they did with their story mode was pretty amazing.

We decided to put all our efforts into something genuine … we’re calling it a story expansion. Street Fighter V, the business model we have behind this is that we’re constantly going to be supporting the game and coming up with updates. It’ll [the story expansion] be a free update.

We decided to do this right in the summer, which is why it’s an update. It came a bit out of nowhere, and we just decided to run it out as part of our service. In terms of the story mode we’ll have in the game on day one, on the disc, it’ll serve as more of a prologue to get people immersed into the world of Street Fighter V.

It’ll also be a prologue for each individual character leading into the story expansion, where it’s going to be this very deep, well-told story. That’s what you can expect. For anyone who has the disc, come June, they’ll be able to get this content for free. At some point in time they’ll get a really big download.

Ono: Talking about each individual Street Fighter title, they all take place in their own spot on the timeline. It’s not one cohesive straight line.

[I glance upward with a bewildered face, trying to work out where in time all these characters were between IV and III. Ono catches my confusion.]

Ono: This is probably a bit more difficult than Star Wars. [Laughs]

Ono: But the idea is, when you get the disc and play a bit of the prologue, you’ll get a taste of what’s happening in that period of time. Then, when you finally play the story expansion, you get a very clear picture of what actually happened.

To talk a bit more about this prologue on the disc, for the character stories, this is very much what people are used to. We have still frame shots with audio and you go through a story.

[I use to call these story segments “Capcom cardboard puppet theater”, as they would feature awesome flat storyboard-like illustrations, with drawings being minimally animated on a separate layer. Like cardboard cut outs moving around a backdrop.]

It’s what people are used to. But this time around we actually have a very special artist who drew the art. Bengus is his pen name. He’s been involved with the Street Fighter series for a very long time. He was actually a senior employee when I joined the company.

He’s been in the game industry for 25, 26 years. In order to bring together everything that happens from Street Fighter II on, covering that entire area, it was important to have someone like him involved in the project to bring that all together, somebody who’s deeply involved with Street Fighter. 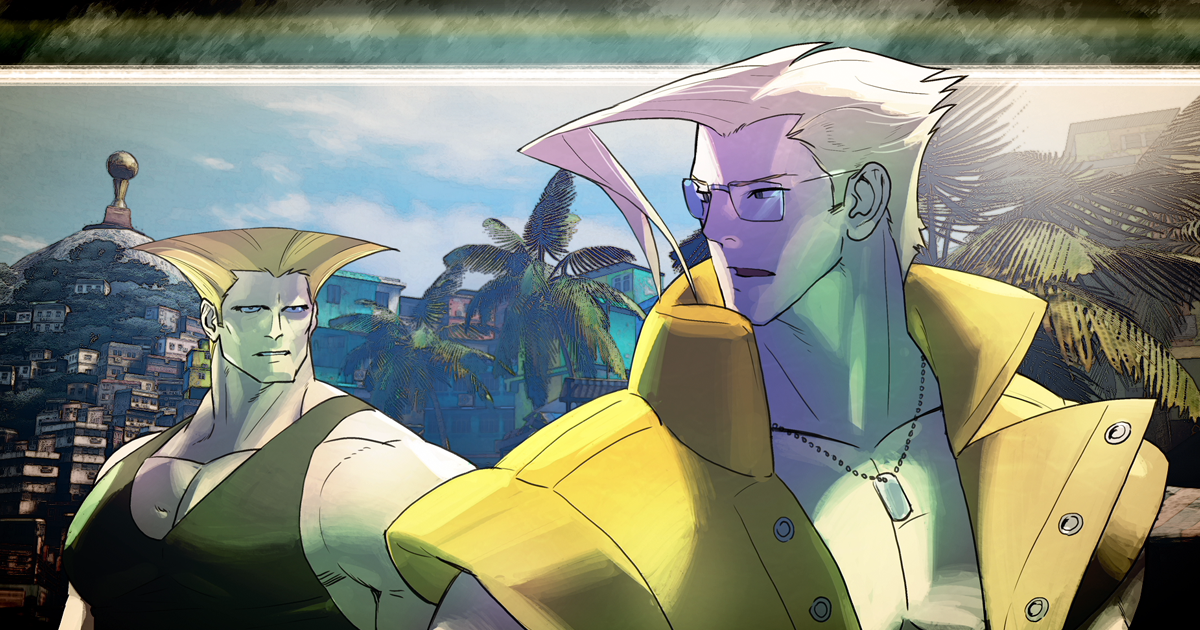 GamesBeat: Bengus is definitely one of my favorite illustrators.

Ono: It’s a bit embarrassing to mention this up front, but after being involved with the Street Fighter series for so long, this is the first time we’ve had this level of story, where it’s being told in a very serious tone.

We’re putting a lot of effort into this. We’re looking to make something that’s going to be appropriate for long-time Street Fighter fans as well as people who are brand new to the series. The length of the cinematics altogether is more than an hour. We’re really looking forward to seeing how the story unfolds.

As I mentioned earlier, the way the timeline flows between the numbered titles is far more complicated than Star Wars, but for people who actually understand it, the long-time Street Fighter fans who know about the story of the series, there are lots of hints that people are going to go, “Oh, yeah, this is what happens between II and III or II and IV.”

This is eventually going to make it out into the wild, so we’re all looking forward to fans picking it apart and trying to guess as to what happens in the timeline.

We really want people, when they experience the story expansion, to realize how amazing Street Fighter is as a brand. Some people may say, “I don’t know much about Street Fighter.”

But when they see this they’ll realize, “Wow! Street Fighter is a real contender! This is an amazing brand with an amazing story.”

Again, this is going to be given out for free. We’re in the middle of creating this content to roll it out in June. But we want people to enjoy this as part of a total experience in Street Fighter V.

GamesBeat: So … do you think people don’t recognize Street Fighter as a brand today?

Ono: In terms of Street Fighter as a fighting game brand, it’s very well established and recognized. We talk about this a lot in our interviews, but more so than video entertainment, Street Fighter is more of a video tool.

People use this as a tool to play in tournaments. That’s where a lot of the entertainment in it comes from. However, we do want to provide something for people who want to immerse themselves in a world. Those are gamers who are more into the video entertainment style.

For the last 30 years, we have to admit that in terms of Street Fighter as a form of video entertainment, it’s been a little weak.

But this time, with the combination of the character stories and this story expansion, we feel like we’re going to be able to offer something those fans will appreciate and enjoy. 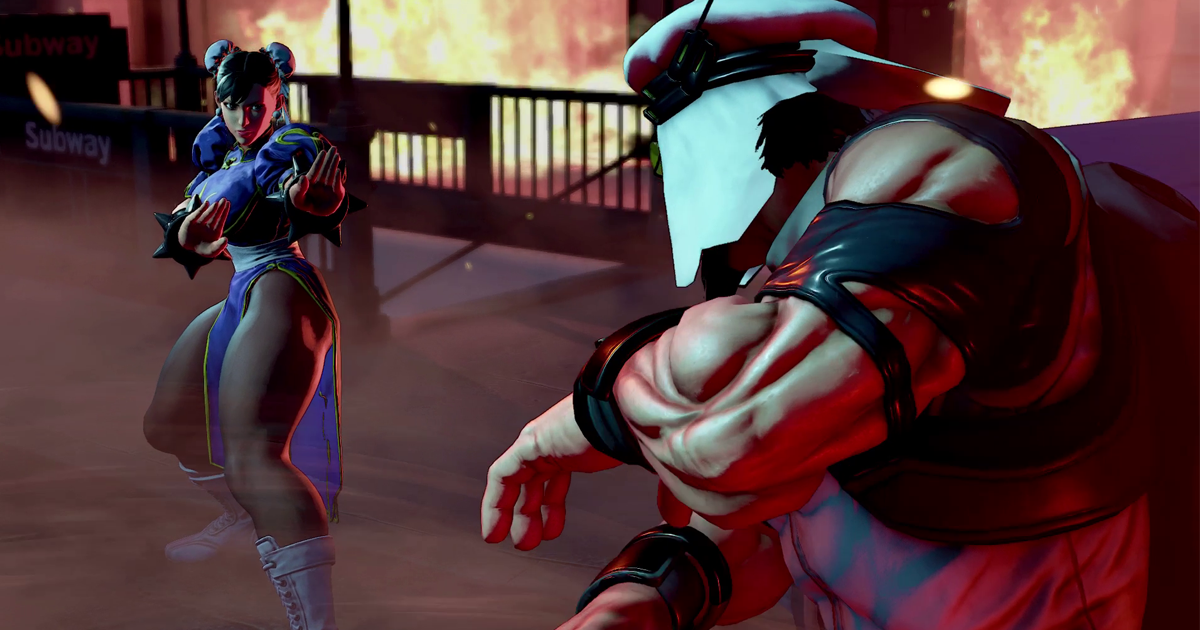 GamesBeat: Hmmm … you know, I guess I’m different from a lot of people, because when I play Street Fighter all I care about is the gameplay.

All of these people asking for more narrative, like … who is that? Is that a more Western thing, or is this a request coming from all over the world? Because I really could not care less about the back story.

Ono: That’s an older generation’s feeling, yeah. I think it has more to do with that.

What ended up happening is that Mortal Kombat X came out, and we had people internally, like Matt here and his team, who knew that people wanted this type of story content. On our end, initially, we thought, “Hey! Maybe this is just a western thing.”

But when we started talking more about this with people all over the world, we started realizing that young people were really into this type of content. The younger generation realizes that this is a fighting tool, a tool to be able to compete with other people, like chess. But they also want to have something they can enjoy as a single-player experience. They’re wondering, “What’s going on in the world of Street Fighter?”

This is something they want to know, that they care about. For older folks who’ve been involved in the series, either they don’t care, or they already know everything.

Ono: These younger people, the only sources of information they can go to are some old guy. … [Ono gestures toward me] … and that’s probably not the best experience. It’s probably a sort of generational gap.

So in order to bridge that gap between people who know and people who don’t know, this is something we’re providing to fans, to get them up to speed on what’s happening in the Street Fighter story.

As I said, up until now this has been a fighting tool, a tool to battle between two people. But there are different types of players out there. Not everyone is just into fighting. There are people who are into RPGs or Call of Duty.

These people are more into action gaming, the personal experience. To provide something in the game that could give people a hook to immerse themselves in the Street Fighter world, we prepared this prologue for the character stories and the story expansion.

It’s something that can give an opportunity for these types of players, who aren’t necessarily into just the fighting tool, but are more into games as a personal experience.