When it comes to games, investors are a fickle lot. In 2015, investments in game companies fell dramatically, according to data from analysis firm CB Insights, which provided the information exclusively to GamesBeat.

In 2014, venture capitalists poured $2.43 billion into 217 game companies. But in 2015, the number fell to $1.02 billion invested into 216 companies. The average investment per company fell from $11.2 million per deal to $4.7 million per deal. But if you take out two of the biggest anomalies of 2014 — the $542 million investment into augmented reality glasses provider Magic Leap and a $500 million round for Korean game company CJ Games — then the amount invested in 2014 was $1.4 billion. Either way, it’s a sizable drop.

Games have had a volatile history when it comes to venture investments. From 2008 to 2010, the rise of casual and social games by companies such as Zynga spurred a lot of new investment. Facebook gaming took off, but missteps in the business model led to investor dissatisfaction and a slowdown in investments, CB Insights said. 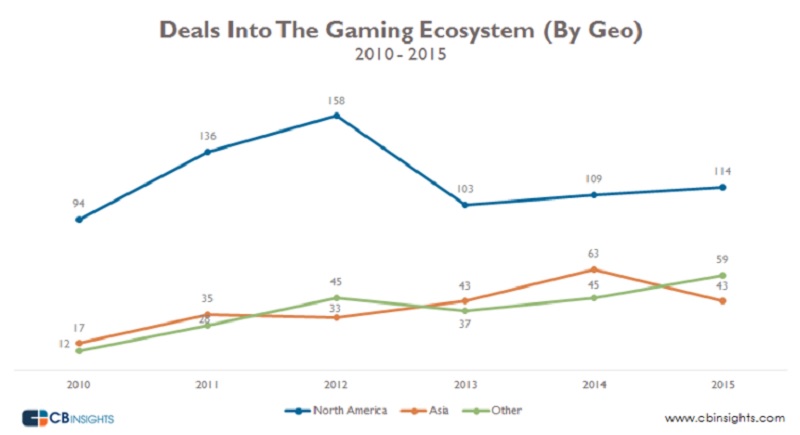 Above: North America dominates game investments, but other regions are on the rise.

But now, esports and virtual reality are fueling investments in games and infrastructure for games.

“When we look at the financing trends, there’s a buildup of deal activity and investment through 2011,” said Anand Sanwal, CEO of CB Insights. “This was shaped by the hype around Zynga, which went public that year. VCs also poured money into casual internet and mobile gaming companies like Spil Games, Rovio Entertainment, and Kabam. As Zynga subsequently collapsed in the public markets, deals into the gaming ecosystem dropped, falling to just $533 million in 2013 funding.”

But 2014 saw a revival, partly spurred by Magic Leap’s big round. Even without that deal and the CJ Games deal, investments still rose to $1.4 billion. The investment market held steady in 2015.

Companies included in this analysis include pure gaming companies, gaming-related hardware, eSports companies, and virtual reality (VR) companies that have specified gaming use cases. With VR, an entire ecosystem of startups have raised money in anticipation of the consumer releases of VR headsets in 2016. 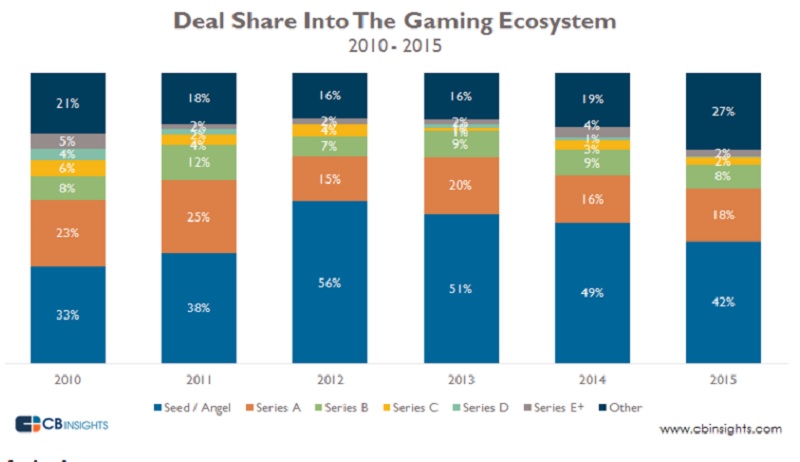 Above: Most money goes into the seed stage with game investments.

“Some companies are working on the infrastructure, ‘plumbing,’ and social communities around VR gaming (EnvelopVR and AltspaceVR),” Sanwal said. “Some are working on the hardware side of things (Absentia, Realiteer), and others are developing games themselves (Solfar Studios, Playful Corp, nDreams).”

As for esports, companies are working to support various aspects of esports, including content (Machinima, Curse), coaching (Dojo Madness), and streaming (ImbaTV, Raptr).

North America remains dominant in venture capital investments into games, with more than 100 deals each year since 2011. Asia saw growth through 2014 but has seen a dip this past year, while other regions also saw growth in 2015 at 60 deals which marked a five-year high.

Companies outside of Asia and North America that got funding in 2015 include Space Ape Games (UK), Thotwise (Argentina), and Kiro’o Games (Cameroon). 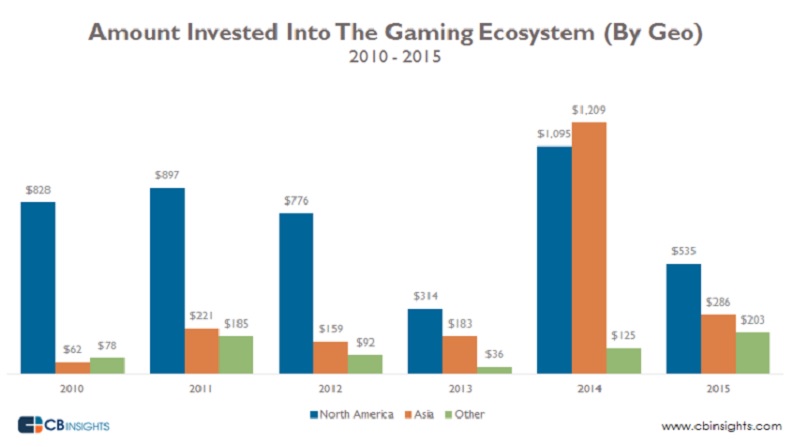 Above: North America got the most game investments in 2015.

Although the number of deals is smaller in Asia, that region surpassed the U.S. in funding dollars in 2014 (largely due to CJ Games). Both continents saw a major funding drop in 2015 with fewer $100 million mega-deals. Funding outside of Asia and North America did break $200 million for the first time.

Sanwal said that most of the deal share in gaming has gone to the seed stage.

“However we’ve seen three consecutive years of declining deal share at the seed level, while other stages remained relatively range bound,” Sanwal said. “There was an increase in deals classified as ‘other’ in 2015, which includes convertible note funding and minority investments by corporations who are an increasingly active investor in the startup scene generally.”

In 2015, the most active investor in gaming has been the River Accelerator from Rothenberg Ventures, which has invested solely in VR companies (including several specialized in gaming). London Venture Partners was a close second, investing mostly in pure gaming companies. Seven investors had five or more investments into gaming related startups in 2015. 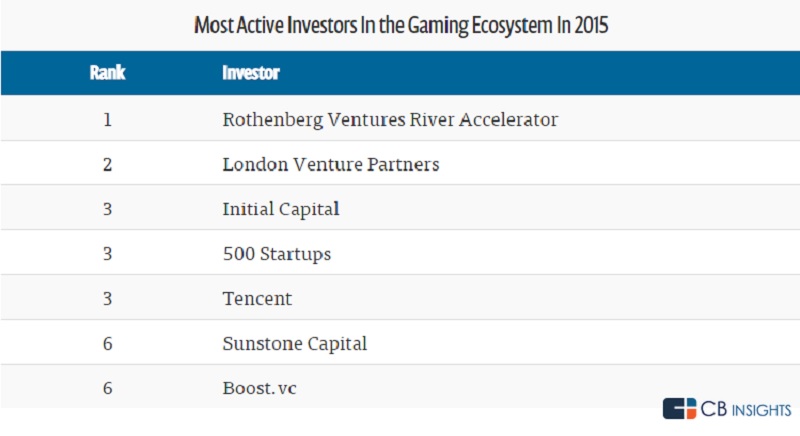