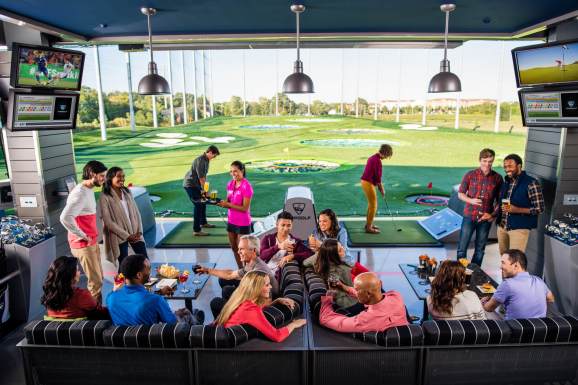 You usually don’t shuffle in golf, but that’s what Topgolf is doing after acquiring a major competitor today.

The operator of driving ranges and entertainment centers has added World Golf Tour, the top online golf gaming in the world with 14 million players on web and mobile. The move brings Topgolf into the $25 million online golf market, and it will also expose WGT players to its entertainment centers. Topgolf’s game is “a driving range on steroids,” as a company spokesperson told GamesBeat in a phone interview, turning the targets into what’s essentially a dartboard. This will be playable in World Golf Tour, and it pairs well with the online and mobile game’s bite-size golf challenges and larger competitions.

The deal took root in midsummer, and Topgolf chief creative director Chad Nelson — who worked for World Golf Tour before the acquisition — says in a phone interview how both companies and their products complement each other — and bringing them together leads to better player engagement.

“For Topgolf, once a guest leaves, how do they continue to be engaged? And in our case, all we offer is virtual, so how do we tie it into real world?” Anderson said. “So, we looked at that. They have these facilities, virtual community, and location; players go meet and socialize and enjoy the sport they are virtually playing — the synergies are so strong, doing this together.”

One of the struggles golf has encountered in the post-Tiger Woods era is fighting for the player’s and viewer’s attention span.

“The big difference from the Woods era and before is that there’s a battle for time. We have so much [that has] access to our time — immediately with our phones in our pockets, our eyes, even VR headsets,” Anderson said. “Golf has a significant time investment — 4 to 5 hours to watch, 4 to 6 hours to play on a crowded course. … it’s a huge uphill battle.”

Anderson said that Topgolf has no plans for virtual reality. But while he was with World Golf Tour, it went from being an online game to a mobile game. It has a history of moving to new platforms.

Topgolf is a privately held company and declined to disclose the terms of the deal to GamesBeat. It’s also adding two new divisions and is shuffling its corporate structure, creating a holding company to “support the organization’s rapid growth,” according to a canned release. This is the Topgolf Entertainment Group, with headquarters in Dallas and offices in San Francisco, New York, Seattle, and London.