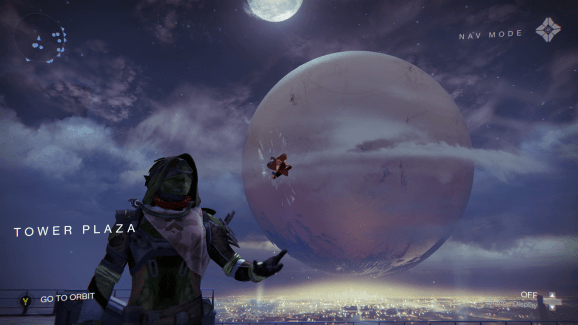 Chilling in the tower in Destiny.

Destiny’s future is in new hands.

Harold Ryan has stepped down as president of Bungie, the studio behind the hit sci-fi shooter Destiny. Ryan joined Bungie way back in 2000, and his departure comes a week after rumors that Destiny’s sequel has been delayed.

Destiny is now one of the biggest names in gaming — the new intellectual property sold 6.3 million copies within a month of its September 2014 release, and it currently has over 25 million registered players (although not all these accounts will still be active).

Current chief operating officer Pete Parsons is taking charge at Bungie in the wake of Ryan’s departure, and he’s now in the role of chief executive officer.

“As CEO, Parsons will be tasked with leading the talented Bungie team as they continue to develop great Destiny experiences,” read a statement from Bungie.

Parsons also weighed in with some comments about Ryan’s work over his years at Bungie and the nature of the task going forward.

“I want to personally thank Harold for his friendship, passion, hard work, and dedication in helping make Bungie the great company it is today,” said Parsons. “As a team, we celebrated many victories and weathered many storms.

“To the players of Destiny, I want you to know that my number one priority, and Bungie’s, is and always has been to deliver great games that we can all share together. I believe that Destiny is a one-of-a-kind experience. I also believe you have yet to see our studio’s best work. My new role here at the studio will be entirely focused on fulfilling that promise. “