Upsight is on a march to become a one-stop shop for helping mobile game developers make money. And it is taking a big step forward today with the acquisition of Fuse Powered, a mobile monetization and ad mediation platform.

Terms of the deal were not disclosed. Andy Yang, chief executive of Upsight, said in an interview with GamesBeat that customers had urged the companies to team up because they used services from both companies.

“We are extremely excited about this acquisition,” Yang said. “This is an awesome team that is joining us. We want to be a one-stop shop. Our customers complain there are too many software development kits (SDKs) and too many data sources.”

He said that the deal will add Fuse Powered’s fast-growing ad mediation platform to Upsight’s mobile marketing and analytics services, allowing Upsight to serve developers with monetization solutions for either in-app purchases or mobile ads. The move could create an industry powerhouse, as Upsight already helps developers optimize more than $2 billion in mobile game revenue. Upsight handles 500 billion data points for more than 10,000 apps each month.

San Francisco-based Upsight was formed by the merger of analytics firm Kontagent and PlayHaven in 2013. The idea was to package together different services for mobile game developers that would enable them to analyze their users, craft marketing messages, and execute the campaigns by targeting the users most likely to respond. The goal was to help game companies increase their engagement and retention — key metrics in helping a mobile game last longer and monetize better. Upsight would have a single platform so that developers and publishers could use it to simplify their monetization efforts. If a user was quiet for a while, Upsight could figure out why and send a promo notification to the user, such as a discount on in-app virtual items.

But Upsight wasn’t quite done. In September 2014, Upsight sold its PlayHaven business — which included its own mobile ad network — to Science. And then social mobile gaming firm RockYou acquired PlayHaven from Science in May 2015. Yang said at the time that PlayHaven’s ad network was one of dozens available, and it represented a conflict of interest.

Game developers often want a choice of ad networks when they promote their games, since they often seek specific kinds of customers that different ad networks can reach. PlayHaven itself offered only one ad network, and it couldn’t credibly recommend the best possible ad network for a given developer if it operated its own. By selling off PlayHaven, Upsight eliminated that conflict of interest.

But that meant Upsight’s services were overly weighted toward one way of monetizing users through in-app purchases. The Fuse Powered deal gives Upsight a way to participate in mobile advertising — without the conflict of interest tied to one ad network.

Fuse Powered mediates ads, meaning it works with all of the mobile ad networks and it tries to serve the right ad from the right provider to the right user at the right time. By adopting a neutral stance, Upsight said it lets the best ad network win based on performance. As a supply-side platform, Fuse Powered gives publishers and developers the ability to monetize every single install, even those who don’t buy anything, by showing them rewarded ads, or those that give you currency in the game if you watch a video.

Stewart Rogers, analyst at VentureBeat’s VB Insight, said that in a study of 51 mobile monetization companies, Upsight ranked in the top ten and, according to 176 game developers who have collectively published almost 1,100 games, fifth place for the most effective companies to work with. In addition, both Upsight and Fuse Powered featured in our mobile marketing automation (MMA) ‘best bets’ for the mobile games category. This acquisition puts the new combined company in direct competition with Tapjoy, the only other major MMA solution to offer an ad exchange and mobile marketing automation in one suite. 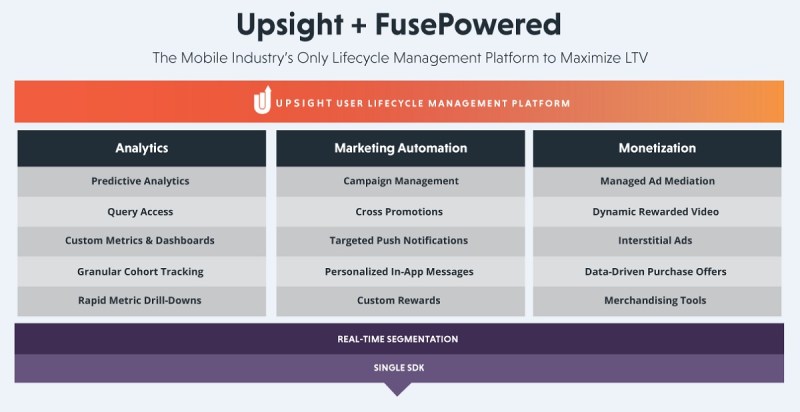 Above: Upsight has acquired Fuse Powered to offer a one-stop shop to game developers when it comes to marketing.

“This allows us to stay true to our vision of doing what’s best for our customers and helping them generate the most revenue possible,” Yang said. “This is deja vu. We saw no one else in the competitive space with this neutral approach to ad mediation.”

With the newly combined company (operated under the Upsight brand), Upsight will be able to provide an end-to-end user life-cycle management to maximize lifetime value (LTV), or the amount of money generated by a user during the life of a game. Yang said it ties together data, actionable tasks, and revenue generation.

“Fuse has always been focused on making our publishers more money with less hassle,” said Jon Walsh, CEO of Toronto-based Fuse Powered. “We are thrilled to join forces with Upsight to deliver the most comprehensive user life-cycle management platform to the world’s leading mobile businesses and help them maximize user LTV.”

Asked why he sold the company, Walsh said in an interview, “We were looking at alternatives to how we could most rapidly grow our business. I started talking early on about a business relationship. Upside has a great product and a deep relationship with us. We both focus on the quality of users, not quantity. We hit it off right away. They drive more money to developers with less hassle, and we pride ourselves on being an unbiased solution for optimizing ad revenue. It was a no brainer for Fuse Powered.”

Upsight said the combined revenue growth of both companies from 2013 to 2015 was 447 percent. Overall, the companies track more than 800 million monthly active users, who are their customers’ game players.

“Upsight currently tracks and optimizes $2 billion of commerce revenue on an annual basis,” said Yang. “But, ad revenue has become an increasingly critical component of the mobile ecosystem for publishers to monetize users. With Fuse, we now complete the entire revenue picture and can help our customers achieve harmony between the two streams. We want to build the most comprehensive solution possible.”

Yang said that there is very little overlap between the companies. After the acquisition, Walsh will be president of Upsight. Yang will continue as CEO, and Josh Williams will continues as chairman and chief technology officer of Upsight.

The combined software development kit is available now as a limited beta, since the two companies have been partnering and have been working on it for a while.

Upsight isn’t saying how many people will be in the combined company. Upsight will maintain an office in Toronto, and it will move Fuse Powered’s San Francisco employees into Upsight’s offices. Upsight’s customers include Warner Brothers, Viacom, Turner, Electronic Arts, Activision, Glu Mobile, and Big Fish Games. Most of the customers are in the game industry, but Upsight has been expanding to other industries in recent quarters.

Upsight won’t be taking over Fuse Powered’s Corona Labs game engine. In the lead-up to the merger, Fuse Powered sold off the Corona Labs business to Perk. Yang said the game development engine wasn’t part of the overall strategy to focus on monetization of a full life cycle for users.