One of the best games I saw this week at Valve’s demo of the HTC Vive virtual reality headset was Final Approach from developer Phaser Lock Interactive. This aviation-themed VR game makes you feel like you are a kid again, playing with toy airplanes in a pretty virtual world.

The title is one of the launch games for the HTC Vive, the VR headset for the PC that debuts in April. The game delivers the kind of experience that is immersive and you can only experience in VR. That’s exactly what the Vive will need to stand out from the competition and induce the masses to embrace a platform that some say will be a $30 billion industry by 2020. This is one of a dozen previews we’re running on game demos on the HTC Vive.

In Final Approach, you are something like an air traffic controller. You can stand in the middle of an island, point to a flying plan with your virtual finger, and guide that plane into a beautiful landing on an airstrip on the island below. It is an awesome, immersive experience where you can walk around inside the virtual world and control the planes in a way that is much more intuitive than controlling them with a traditional video game controller.

“That’s exactly the idea we wanted to get behind, the feeling that you are a kid playing with your toys” said Michael Daubert, chief creative officer at Phaser Lock Interactive, in an interview with GamesBeat. “You control these toys and care about them. You don’t want to break them. And there is this whole world of action going on around you.”

It’s sort of like a blend of aviation and airport management, with a bit of SimCity and flight simulation thrown in. The game world exists within the confines of your living room, as the HTC Vive has sensors that allow it to map a free space in your room. The VR system lets you maneuver around a safe space in your room, so you can wander around the Final Approach island and see it from different points of view. You can also use hand controllers to interact with the items in the virtual world. 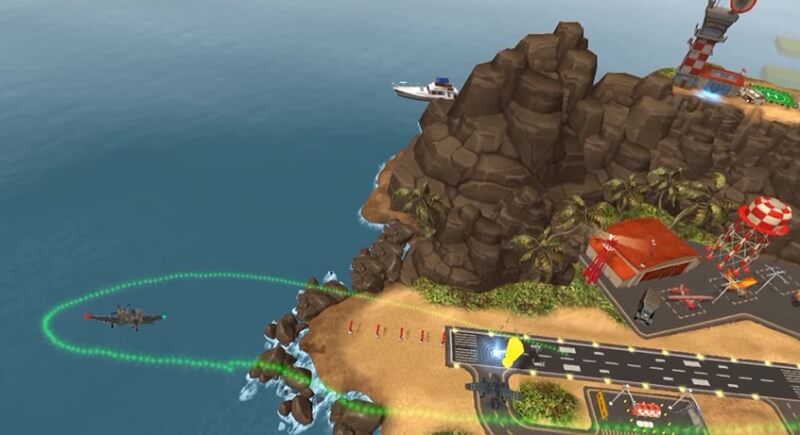 Above: Final Approach is like playing with miniatures in VR.

Like the 2D game on the iPad, Flight Control, you can manage the aircraft landing at a busy airport. Using the touch control system of the HTC Vive, you can point at aircraft and trace a path. you can get them to fly through a series of circles and land. I did this a few times, and the game was fairly forgiving at enabling aircraft to land even with crazy flight paths. The environment of the game was beautifully rendered. You can also scale down to a micro environment on the airfield, where you have to use fire extinguishers to put out a fire on an aircraft on the landing strip. So you can switch from a bird’s-eye view to a first-person view. You can chase away seagulls with air horns.

I didn’t have great luck with another level in the game, where I had to guide a helicopter through skyscrapers to drop a load of materials on a skyscraper under construction. I picked up the load OK using my fingers, but when it came time to drop them, I clipped the top of a building and crashed the helicopter.

The best part of the game seemed like a different title altogether. I was in the middle of a toy version of the Battle of Midway from World War II. I was able to control (historically out of place) military jets. I launched a series of drone aircraft with a tap of a finger. I traced landing paths for aircraft that were damaged. And I led an enemy fighter into a wave of flak from one of the nearby ships. This part of the game was more like a combat flight simulation, while the rest of the game was like an airport management game or SimCity game. 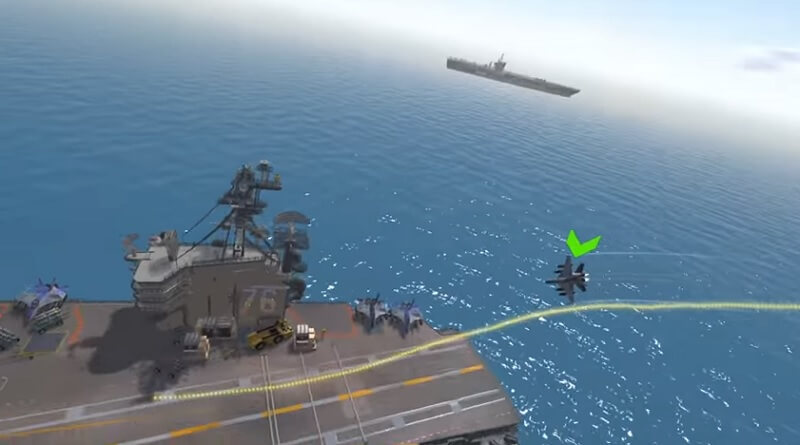 Above: The Midway level in Final Approach.

The game has six levels right now. It could have three to five hours, with lots of replay value, said Daubert. The missions take seven to ten minutes. The missions force you to deal with flight challenges in crowded urban environments, tropical islands, and wilderness landscapes, while training them to battle forest fires, rescue boaters at sea, or even perform full military strikes. You have to watch out for other aircraft, landscape hazards, and even thunderstorms.

The game is the first title from Austin, Texas-based Phaser Lock Interactive, which has 14 employees. Daubert and Nagle are 25-year veterans of the game business. They started the company in May 2015, after participating in a game jam on room-scale VR. The team did a demo and then Valve, the creator of the Steam VR platform that the HTC Vive uses. Valve asked the team to create a title. The team is doing the game as a launch title for the Vive, but it also plans to do versions for the Oculus Touch and PlayStation VR.

The title will be a paid game on the HTC Vive, and it is expected to debut on other VR platforms too.