We’re not sure if Valve is making a version of Portal for the HTC Vive virtual reality headset, which is powered by Valve’s own Steam VR technology. But at least one developer has been inspired to make a Portal-like game in VR.

Neat Corporation from Stockholm, Sweden, showed off Budget Cuts at Valve’s recent Vive showcase in Seattle. The title is one of a dozen releases that I saw for the HTC Vive, the VR headset for the PC that debuts in April. The system is Valve and HTC’s bid to be a player in what could be a $30 billion industry by 2020, according to tech advisor Digi-Capital.

From the start, Budget Cuts will make you smile. It has a staid corporate art style that makes you feel like you’re walking around in a giant office building. Although you can move around 360 degrees with the Vive headset (which has sensors that designate a safe spot for you to walk around in your living room), you actually don’t move all that much on your own. 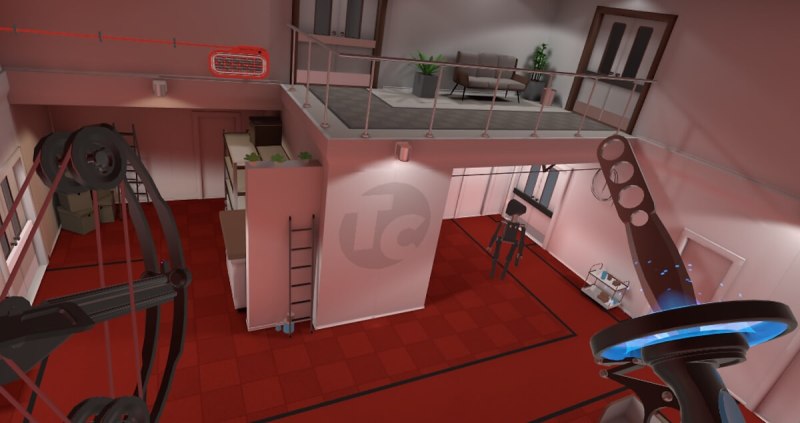 Above: You have to find a way around the robot guards in Budget Cuts

You play as a spy for Trans Corporation. You’ve been laid off, thanks to budget cuts. You sneak into a building with the object of finding your job application. When you find it, you have to stamp “approved” on it. But you don’t really roam. You can walk around in a room-sized space freely.

To move farther, you use a special gun, which enables you to teleport from one place to another. You shoot out a ball which lands some distance away. When you click a button on your handheld touch control, you travel quickly to that spot. It’s pretty similar to a system used by Epic Games in its Bullet Train VR demo for the Oculus Rift.

It took me just a couple of minutes to learn how to move around. You can shoot the gun through open vents, doorways, windows, and other openings. That allows you to travel unseen. Some clunky robots guard parts of the office, so you have to figure out a way around them. One way to do that is to find a knife. Then, you can use the portal gun to sneak up behind the robots. At that moment, you can throw the knife by making an actual throwing gesture. The first time I did this, I was throwing at a target on a wall. The knife went about half way to the target and descended to the floor. So, each time I threw the knife, I had to throw it hard.

I wandered around through vents and avoided the red areas that were staked out by the robots. If the robots catch you, you’re dead. You have to throw knives at them to take them out before they get you. I didn’t have time in my demo to do this, but I could see it would take some practice to learn how to throw in VR. Mind you, it’s not exactly the same as throwing a knife in real life. For one, it’s not as accurate. And, as I mentioned, you have to throw it harder than you otherwise would. I think that part of the experience needs some more work.

Above: This robot is a good target for a knife throw in Budget Cuts

Other parts of the game require you to find keys to unlock safes and otherwise solve puzzles. Joachim Holmér, one of the cofounders of Neat Corporation, said that the dev team is still working on some things, such as a way to make the throwing more accurate.

A very small group is making the game, with two full-time developers, one part-time, and two freelancers. It is self-funded. Here’s a video of the gameplay. Budget Cuts isn’t a launch title, and it is expected to ship by the end of the year, Holmér said.